Thus, Charlie's food so far has consisted of whatever we happen to have around that can be pureed beyond recognition.  Beets, applesauce, pear sauce, stewed prunes, bananas, oatmeal, squash, sweet potatoes, egg yolks, yogurt, chicken, lamb, venison . .  .  As these things appear in the kitchen, they get thrown in the food processor and fed to Charlie.  The only things he has so far been not too crazy about are the sweet potatoes and squash.  Which is kind of weird, because most babies love those sweet orange vegetables.

Oh, and the venison took some getting used to, because even when obliterated in the food processor, it was still a little too textured at first bite for him.  He got used to it, though, and eventually ate it with gusto.

In fact, Charlie seems to be quite the fan of protein.  So when we cooked one of the three Atlantic salmon randomly provided to us by Mr. Jason a few days ago--because you know Mr. Jason is all about the random fish supplies--I figured I could puree some of the leftover fish for Charlie.

So I did.  And then I tasted it, because another part of my baby food philosophy is to not feed my kids anything I wouldn't eat myself.

It tasted really gross to me.

Freshwater fish always has a slight flavor of iodine to me, and that flavor seemed to be more pronounced.  I don't know if it was the pureeing or the fact that it was leftover or what, but no way would I have eaten that.

But since I have a very sensitive palate and a lot of the time when I taste something off it's not noticeable to anyone else, I figured it wouldn't hurt to let Charlie make up his own mind about it.  So I fed it to him.  And, shockingly, he ate it with no hesitation whatsoever.  Quite a lot of it, in fact.

I shouldn't be too surprised, since Cubby will readily eat things that I want no part of (LIVER--GROSS), and I'm glad my children aren't inheriting my food prejudices.

It did make Charlie smell like cat food for awhile, though.
Posted by Kristin @ Going Country at 5:52 PM 5 comments:

I have mentioned before that while it is something of a necessity for me, I do not particularly enjoy wearing Charlie outside.  For one thing, it hurts.  For another, it's frustrating because I can't DO anything when he's strapped to me.  So I end up just walking around looking at everything that needs to be done and . . . not doing it.

But I wore him outside anyway, because Cubby wanted to be outside.  This winter, however, Cubby has been getting strangely reluctant about going outside.  We think it's because he hates putting on all the cold weather gear.  Mittens particularly.  Man, does that kid detest mittens.  Probably because you can't actually do anything with mittens on. If you can't operate a tool, what's the point of going outside?

And since I'm not too jazzed about hauling Charlie around outside anyway and I don't really feel like fighting about getting outside, we've been spending more time inside.

Which just means more misbehavior and boredom from Cubby because he's too cooped up.

So this morning, when Charlie went down for his first nap, I was determined to get Cubby outside one way or another.  Despite the 22-degree temperature, I was prepared to forego all winter apparel except his coat and hat.  He could do without the mittens, snow pants, and insulated boots.  But I still had to come up with something exciting enough to do outside that he would be willing to go out.

Then I remembered the asparagus plants that I never did cut down all the way when they died in the late fall.  And you know what Cubby likes to do?  Cut things.

When I told him we were going outside to cut down the dead asparagus plants and that he could have a pair of scissors to help, he was all for it. Of course, when we got out there, he just wanted my pruning shears, but he waited patiently until I finished my asparagus pruning before taking them to attack some weeds.

Then I borrowed them back so I could cut down the blackberry canes.  The bark at the bottom has been completely stripped by rabbits this winter, so they're not going to bear anything anyway this summer.  Some of them were all broken off already, so I figured I'd just cut them all down and cover the whole area thickly with sheep shit straw in an attempt to get control of the rampant weeds that plague that area.

One benefit of winter gardening in the blackberry patch is that I'm already wearing gloves, so I'm saved from my own stupidity.

Then I got a load of firewood brought from the pile on the lawn to the stacks by the door before he got cold (thanks to his insufficient clothing) and wanted to go inside.

So.  Blackberries and asparagus pruned, firewood stacked, and child aired.  Success.
Posted by Kristin @ Going Country at 7:50 AM 5 comments:

Life As I Know It 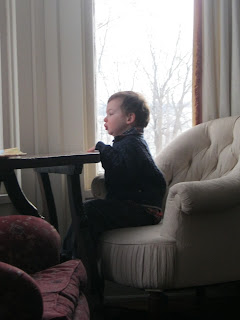 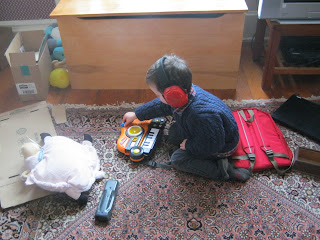 "I always have to wear ear muffs when I'm listening to music, you know, Mommy."  I did not know, but I do now. 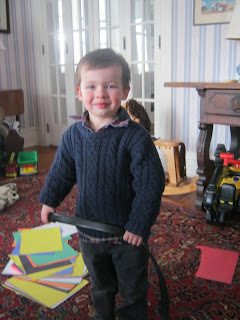 The lake trout bite like crazy on Daddy's black dress belt.  A little tip for you, courtesy of Cubby.

Meanwhile, Charlie is bouncing maniacally in his station . . . 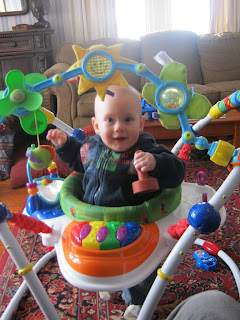 While chewing on the top to the calf bottle A. bought to feed the bottle lambs and then switched out the calf'-sized nipple for a lamb-sized one.  Turns out that calf bottle nipples are the perfect baby teething toy.  Albeit a little phallic and a LOT woodchuck. 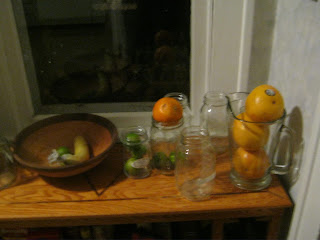 They're lantern fish, I'm told. I failed to see the resemblance, but then I'm notably slow on the uptake sometimes.

Just another day, full of Cubby and Charlie and their attendant insanity.
Posted by Kristin @ Going Country at 6:23 PM 4 comments:

Thanks to a freakish ability to remember songs and song lyrics, I have a continual soundtrack running through my head at all times. Anything is likely to remind me of a song.  Sometimes I sing it out loud--much to Charlie's delight when I change the words to "I Like To Eat Apples and Bananas" to whatever he's eating at the time-- but most of the time it's just in my head.

But what if I were to have to choose a song as a general theme song?  I think I would still have to go with "Ridin' the Storm Out," by R.E.O Speedwagon.

Charlie, as the world's jolliest infant, bops along through life to the tune of "Walking on Sunshine," by Katrina and the Waves.

And Cubby?  Without doubt, Cubby's all about "The Authority Song," by John Mellencamp.  He fights authority and authority always wins.  For now, anyway, but just wait until he's a big man and then watch out. Or so he says.  And I believe him.

So what about you, duckies?  What's your theme song of the moment?
Posted by Kristin @ Going Country at 6:16 AM 4 comments:

Labels: all about me, Audience Participation Days, Charlie, Cubby, randomness

Saturday's sugarin' left me with a little more than a gallon of syrup (three gallons divided between A., Jason, and Jodi left us with about a gallon) that needed a little further reduction.  So I did some of that this morning during Charlie's first nap. I did some dishes as well, because they didn't all get finished last night.

During Charlie's second nap and Cubby's nap, I managed to get some more laundry mucous made.  And did more dishes.

Tonight when both kids were asleep, I canned seven quarts of chicken stock made from the surprise rooster (the lone surviving chick left after the fox attack turned out to be a male) that A. killed Saturday.  And then I did some more dishes.

So, three quarts of maple syrup reduced, three gallons of laundry detergent made, and seven quarts of chicken stock canned.  And a LOT of damn dishes.

* Have you ever read "A Jury of Her Peers," by Susan Glaspell?  I love that short story, and I don't even like short stories.  I always think of the phrase "kitchen things" as used in that story when I'm working in the kitchen.
Posted by Kristin @ Going Country at 6:42 PM 3 comments:

Labels: all about me, country livin', fun with food

Yesterday's sugarin' was very successful, yielding about three gallons of syrup.  It was also very long.  A. started the fire in the evaporator at 6:30 a.m. and I finished straining and jarring the syrup at 11 p.m.

My part of the process always comes at the end, when the syrup is brought in and I strain it through felt and ladle it into the jars I've washed earlier.  This year, my labors were made more difficult thanks to the injury I sustained while in the sugarin' area.

I was out there with Cubby and Charlie, and I tripped over a piece of wood pallet that was in the walkway.  I was wearing Charlie at the time, so I couldn't catch myself with my hands.  My entire weight--plus Charlie's--landed on my right knee.

It was terrifying not only because it's always terrifying to fall like that, but also because the baby was strapped face-out on my front.  Mercifully, my knee broke the fall before I fell forward too much, and Charlie was only startled a little bit.

I, however, have a sort-of deep hole in my knee where I appear to have landed on a rock or piece of concrete and one very, very sore knee.  I can't bend it real well at the moment, so going up and down stairs is something of an ordeal at this point.

It could have been much, much worse, though, and if the only blood sacrifice required by the syrup is from my knee instead of Charlie's face, I'm okay with that.

Plus, we just ate blueberry pancakes with about a pint of maple syrup, so life is really pretty good right now, injuries notwithstanding.
Posted by Kristin @ Going Country at 7:19 AM 7 comments: