Yesterday as I was plating up dinner, I happened to look out the kitchen window to see a strange man in the spruce trees right under the window. He disappeared in the direction of the barn.

Luckily, A. was home. I informed him of the man wandering around our house and he went outside to see what was going on. Cubby wanted to go out, too, but I made him stay inside. Always best in an uncertain situation to not have a seven-year-old on the scene, don't you think?

Before A. found the man, I heard the man talking to something and I thought, "Oh, maybe he's trying to get his dog back." And then I heard a bell.

Sure enough, there were two cows standing by the electric fence around the sheep pen. They were staring at the sheep. The sheep stared back. And yelled, of course.

The man was our neighbor from the trailer compound--three trailers, one clan of a varying number of related people that cycle in and out--about a mile down the road. His two dairy cows had gotten through his electric fence and decided to visit their ovine neighbors. Luckily, he found them before they ate my garden.

I've been on the other side of this situation enough to feel nothing but sympathy for the poor man chasing his livestock around the neighborhood. Though I will say that the cows seemed a lot more docile and easy to maneuver than sheep.

A. helped him catch the cows so he could put a rope halter around their necks and lead them home. Cubby and I looked out the front door to see him walking back down the road, leading his cows back home and presumably planning on reinforcing his fence.

Welcome to the north country, where a strange man crashing through your shrubbery just means that cows have gone walkabout. 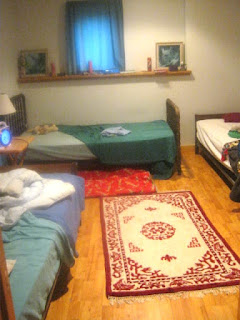 Three beds for three boys. In one room.

There is no way to have three boys in one room and not have a completely ridiculous scene every night. Although at least they're IN beds now, as opposed to when they were just all on the floor. That was pretty much a gladiators arena on mattresses.

Actually, Cubby and Charlie have been pretty good about staying quiet at bedtime since they've gotten their bed frames back. Jack, however, still requires an adult presence sitting on his bed to provide a physical barrier to escape. And even then, he thrashes around in his bed for 45 minutes like a crazed eel before finally, and very suddenly, succumbing to sleep.

Bedtimes have been less than fun around here recently. But one thing that parenting multiple children teaches you is the wisdom of the saying, "This too shall pass."

We just hope it passes sooner rather than later.

This Eclipse Viewing Brought To You By the Public Library


It's a good thing I'm such a devoted library patron. Otherwise I wouldn't have received four pairs of eclipse-viewing glasses and a print-out of the relevant information for our location from the librarian at the tiny library in the village awhile ago.

As it was, I almost forgot I had them until today when I was like, "Oh, wait. Today's the eclipse, right? I wonder when it is."

Obviously, the hype and hysteria that I read about online totally passed me by. I could never be considered a news junkie.

I got out the information sheet and discovered that we're nowhere near a place that could view the total eclipse. Also that the eclipse here was going to occur just when I was driving to the large village for a doctor's appointment. (For the grandmothers who are probably wondering: Just routine, everything's cool.)

But before I left, I set everyone up with the eclipse glasses. 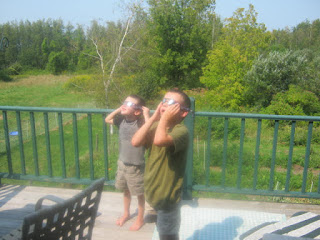 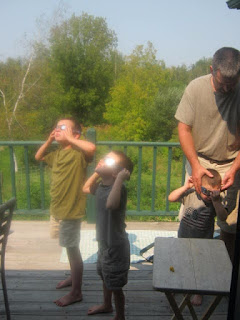 A. was very concerned that Jack wouldn't keep his on and would burn his eyes irrevocably. He didn't.

I took a look through the glasses myself before I left, and you know, it was really pretty cool.

But not as cool as those little dudes in the shades there. Totally rad.

Posted by Kristin @ Going Country at 6:28 PM No comments:


Where the sheep are yelling for corn and the tomatoes are sloooooowly ripening.

The first thing Cubby did when he got out of the car at home was run to the garden to see if there were any ripe tomatoes. Because he is definitely his mother's child. 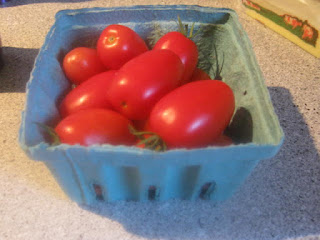 It's a far cry from the late-summer liquor cabinet of old, but it's a start.

There was also a very large Mortgage Lifter tomato that I cooked for dinner last night, along with the green beans that I also sent Cubby out to harvest.*

So handy having a child to harvest things for me. Also handy to be able to come home and browse in the garden for dinner instead of stopping at a store.

We're supposed to have a few days of warm, sunny weather that should help the tomatoes along. If I'm lucky, I may even get enough to make some of Finny's tomato sauce, which is the highest calling for summer tomatoes.

* Plus bacon and eggs and rice, because man cannot live on tomatoes and green beans alone.

Posted by Kristin @ Going Country at 8:06 AM No comments: