And In Related News

I gave in and bought frozen vegetables at the grocery store yesterday.  I have had to face the fact that I will not be producing anywhere near enough vegetative matter from the garden this year to keep our family fed in a well-balanced manner (no matter what A. says, two pounds of steak per person does not constitute a full meal).  I will not be freezing enough chard, green beans, and maquechoux to take us through the winter.  I'm not even going to have enough fresh stuff for the summer.

I had to buy vegetables.  It was a sad day.  Although I must admit that the convenience of opening a bag and dumping pre-picked, pre-cleaned, and ready to cook vegetables is kind of nice.  They don't taste like the real thing, though.

That Which Shall Not Be Discussed

You may have noticed that there has been no talk of the garden this year.

Or you may be busy with your own lives and not give one good goddamn about my tomato yammering.  That is also possible.

But since I prefer the self-centered interpretation of things whenever possible, I'm just assuming that you've been wondering what ever could be going on in Kristin's garden this year.

Every time I go out there, I must fight the urge to trickle tears all over the weedy earth.  No sense giving those bastards any more moisture than necessary.

In addition to the HOLY HELL WEEDS EVERYWHERE that I cannot pull up even though I still do every time I go out there because I can't help myself and then really regret it later when I can't walk, there is the rabbit damage.  Which has been extensive.

And they did all this despite the garden cloth I had over these plants.  I guess they just limboed under it in the spaces between the bricks weighing it down. And I didn't notice in time to prevent much of the damage because I just haven't been getting out there all that much.

We don't usually have such a problem with rabbits in the garden because of the dogs.  But this year, due to new garden fencing arrangements and the fact that Otty has had to be tied up much of the time because of behavior issues, the dogs just haven't been in the garden.  And the rabbits have.  A. trapped one and the dogs got a couple, but it appears there is a never ending supply in the gully by the garden.

I'm not too happy with the potato field either.  They all got covered with mulch once.  Some of them got a second mulching, but not all.  There are so many weeds in there I can't even see the potatoes.  And the weeds are taller than I am.  I will definitely not be using this method again when I'm able to do the hilling, because I can't do the mulching by myself and no one else has the time to do it, so it's all just kind of neglected.  Hilling sucks, but I can do it whenever I need to and it kills the weeds in addition to covering the potatoes.The potatoes are there, they are growing and flowering, but I don't know what the harvest will be like.

The tomatoes are growing nicely, but they aren't tied up so they're pretty wild.  All I did this year was have A. put up fence posts and fencing running along the rows to at least keep the plants from doing a complete flop into the dirt.  It will also make it damn near impossible to harvest them, I suspect, but we'll worry about that when it's time to harvest.

The first planting of chard got totally overtaken by weeds.  The second planting of chard got totally eaten by the chickens (I think).  The tilling seems to have sliced up the few missed potatoes from last year into innumerable little pieces that then all sprouted, leading to small volunteer potato plants everydamnwhere that are now bushing out alarmingly and taking over neighboring plants and yet not actually producing any potatoes of usable size.

This is what I see when I go out to the garden.  And this is why I don't go out there much anymore.  It's very sad.

But, as I have mentioned before, the nice thing about gardening is there's always next year.  And the year after.  It's got to improve from this.  Right?
Posted by Kristin @ Going Country at 6:22 AM 9 comments:

Labels: all about me, gardens

Yup, Must Be Summer 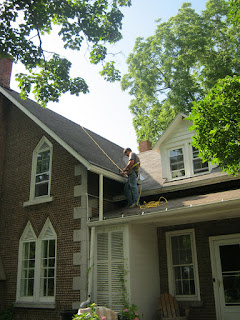 A. is scaling the roof.  Again.

Starting with the first summer of Cubby's life, when A. learned how to roof from an acquaintance, and continuing with doing two porch roofs last summer by himself, roofing has become an unfortunate summertime ritual for A.  This year is especially unfortunate, because take a look at the roof he's working on there in the picture.  See how steep it is?  See how high it is?  See how there is nothing on the side of the house to break a fall from 30 feet up?

He might be afraid of heights, but he was also afraid of water pouring into our bedroom this winter through the disintegrating roof, so he's conquering his fears, facing his demons . . . and roofing.  Again.

I'll just be on the ground with Cubby, keeping him from scaling the ladder and crossing all digits that there are no mishaps up there on that roof.  And really wishing I could have a drink to calm my nerves.
Posted by Kristin @ Going Country at 3:09 AM 1 comment:

A nice lady at the library the other day told me about a new thing at Cornell University called "anarchy play" for kids.  I should probably put the word new in quotes, because it doesn't sound like a very new idea to me.  Cornell (and some other agencies) has come up with a playground to encourage kids to, well, just play.


My my, does that sound familiar.  Except for the fact that Cubby is the only kid (so far) and I am the only "playworker" (an oxymoron if ever there was one), that neatly sums up Blackrock, don't you think?


So if I were to apply this terminology to our life, I guess that means that we exist in a state of constant anarchy. *  That explains a lot.


* Except not really, since Merriam-Webster defines anarchy as "a state of disorder due to absence or non-recognition of authority."  I don't think anyone would say there was a lack of authority around here.  Maybe the non-recognition part is appropriate occasionally, though.
Posted by Kristin @ Going Country at 3:41 AM 8 comments:

A sad one this time: Pitty Pet is no longer with us.

Pitty Pet was our old cat.  Very old.  He was adopted at a shelter and his exact age was unknown, but the MiL was guessing around 18 years.  He had been slowly failing for some time and then he just stopped eating.  So he has been sent to his reward and suitably interred in the burial grounds in the ram pasture.

So good-bye to Pitty Pet.  It was a long, good road for Pitty, but he had most definitely reached its end.
Posted by Kristin @ Going Country at 3:29 AM 7 comments:

I may (may meaning definitely) have been negligent in sharing some news about the farm animals around here.  Like the fact that A. sold his purebred Cotswolds.  Including Bonnie, my own particular nemesis.

The reason for selling the Cotswolds was simple: They had become completely unmanageable for A.  The expanded size of the flock this year meant that A. had to find other ways to get them to grass.  Luckily, we have really nice neighbors who don't mind the sheep on their properties. As long as they are contained enough that the sheep don't end up on their porches, eating their flowers.  So A. got some electrified net fence specifically for sheep and used it to set up temporary pastures for the sheep when their regular pastures were getting too eaten down.

The Cotswolds, however, found that they could run right through the netting.  Apparently the shock they experienced in the charging of the fence was temporary enough that they decided it was worth it to break out.  Which they did.  Over and over and over.  A. kept having to retrieve them from the neighbors' lawn at five in the morning. Cotswolds are also very, VERY loud sheep, so the breaking out would always be accompanied by bellowing from them because the rest of the flock wouldn't always follow, leading to much talking of the sheep back and forth.

This was obviously no good for our relationship with our neighbors.  After one particular day when they got out half a dozen times before 9 a.m., A. just put an ad on Craigslist.  Since he was selling only the purebred Cotswolds, which are not that common around here, he got a call and a guy showing up to buy the sheep within 24 hours.  A. was very sad to see them go, as they were his very first sheep and good mothers, but the guy who bought them has quite a lot of acreage and a fairly large flock already that he's trying to move more towards Cotswolds.  So we know they went to a good home.

Know what?  I don't miss them AT ALL.  The sheep flock is now quiet and well-behaved and a significant source of stress has been removed from our lives.  Good riddance, says I.

Not good riddance, however, is the sad disappearance of the surprise chicks.  They were starting to mix more with the flock, but hadn't yet gotten to the point that they were going into the coop at night.  Then one night last week, the MiL heard a late-night cat (and dog) fight and went out in the morning to find a large male feral cat dead on the driveway.  We figure it probably ate the chicks.  And then the dogs killed it.  Not a good situation for anyone.  So we are once again chick-less, though it's possible one of the other hens (or maybe even the hen that just lost her chicks) may decide to set.  We'll see.

Also, we have tons of birds' nests and babies around the house that we're currently monitoring (blue jays, Baltimore orioles, and Carolina wrens) and the dogs may have finally exterminated the baby rabbits that were eating the garden.  Plus A. trapped a large rabbit near the garden fence that had pretty much decimated everything in that corner--including my lovely beets (DAMMIT)-- so maybe my plants will be safe now.  Temporarily, anyway.


I think that's all for the animal updates.  Although stay tuned!  You never do know what animal hijinks may ensue at Blackrock in the future.
Posted by Kristin @ Going Country at 10:23 AM No comments: