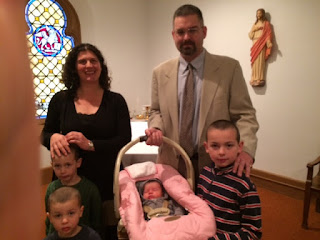 How could I be otherwise?


When A. and I got married--going on 15 years ago now--we, like all newlyweds, assumed it would be our only wedding.

I think it was reasonable to assume that. But you know what they say about the word "assume"!

"It makes an ass out of u and me," is what they say, which is incredibly lame, so let's move on.

Our first wedding was very nice. We were married in the MiL's little white country church, by the minister from A.'s childhood. I wore a white dress. My parents walked me down the aisle. (Yes, both of them. I figured they both raised me. Why should my dad be the only one to walk with me?) The reception was at Blackrock. There were about 60 people in attendance.

But it recently became important to A. that we be married in the Catholic church*. So we did. On Saturday. 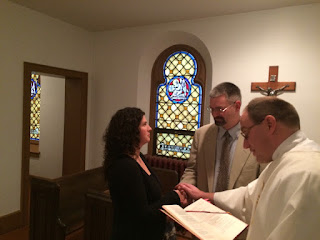 This time we were married in the chapel of a north country Catholic church, by a deacon. I wore black, because the only clothes that fit me at one month post partum and that I can nurse in are black. My parents were both there, as were our four children.

It's not a simple blessing or something; it's a full marriage ceremony. It was a little bit bizarre to be repeating wedding vows and exchanging rings with our four kids there (and Jack standing behind me wearing my mother's glasses, which I really wish I had a picture of), but touching, too. 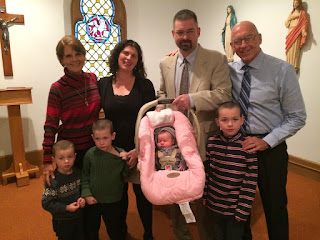 My mother even bought us a wedding cake, with the top tier to be kept for our one-year anniversary and everything. The reception was at our house. And by "reception," I mean the cake and some balloons and bubbles for the kids, because that was pretty much the extent of it and even that was all courtesy of my mom as I had planned absolutely nothing. Thanks, Mom.

The next day, Poppy was baptized. 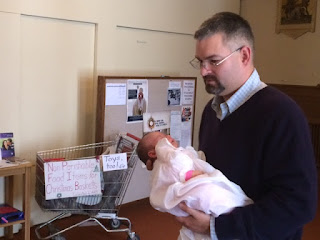 She wore the christening gown that I was baptized in, although I was smart enough not to put it on her until after Mass. Good thing, since she completely soiled herself during the service and required a full outfit change. This appears to be the Sunday tradition now, except this time she wasn't considerate enough to do it before Mass. Maybe she was protesting the (floral, and very cute) pajamas I had her in?

Anyway, all sacraments have now been completed satisfactorily. It was a very exciting weekend.

We leave tomorrow for Blackrock to continue the excitement with Thanksgiving and pie. A whirl of gaiety indeed.

* To the anonymous commenter who wondered: No, it was not a requirement for our children's baptisms. And we didn't have to do any marriage counseling except casually talk to the deacon who performed the sacrament. He rightly noted that newlywed marriage counseling at this stage would be a bit ridiculous.

Labels: all about me, baby stuff, Charlie, Cubby, family, Jack, Poppy, the A team


We did a lot of stuff this weekend. Cubby and Charlie received awards at a school assembly for their "Can Do Attitudes".* Poppy was baptized. And A. and I got married. Long, loooong story. I'll tell it soon.

Anyway. Lots of stuff happened. My parents were here for all of it, and my dad took pictures.

And then I didn't write about it. Again.

I'll try to do that this week when I get the pictures from my dad. But considering I found A. sitting in the living room drinking tea at 3:45 this morning because he came down with a nasty cold, and that Poppy is coughing and snuffling with what I must assume is the same cold, and that we're supposed to leave for Blackrock on Wednesday morning, it might be awhile.

Just cross your fingers for me that no one else gets sick, okay? Okay.

* I'm sure I'm not the only one with children who seem to be Dr. Jekylls at school but morph into Mr. Hydes at home. I'm always just glad that at least they can behave themselves in public. Usually.
Posted by Kristin @ Going Country at 4:02 AM 4 comments: