Okay. The children are fully recovered from their illness. Though I am still technically contagious, I feel fine and the red spots are mostly gone and no longer hurt. So enough about this disgusting pestilence. Let's move on to happier things. With a picture even! Hooray!

One of the manifestations of my extreme introversion is the fact that I love to eat by myself. Love it. Just me, my food, and a book, and I am one happy Kristin.

However. Eating alone is virtually impossible with two little shadows named Cubby and Charlie around all the time. At breakfast, I usually eat standing up by the stove while I make the second batch of eggs or pour more milk or whatever. I spend every dinner time nagging about table manners and eating while getting up and down to wipe up spills, pour more milk, get more food and on and on and on.

I think often of the quote from the movie A Christmas Story: "My mother has not had a hot meal for herself in fifteen years."

So breakfast and dinner are definitely out for solitary dining. And that's okay. It's part of this insane mothering life. But lunch . . . well, lunch is sacred. Lunch I plan for and finagle nap schedules (for Charlie) and cartoon viewing (for Cubby) all day so I can sit down by myself to this: 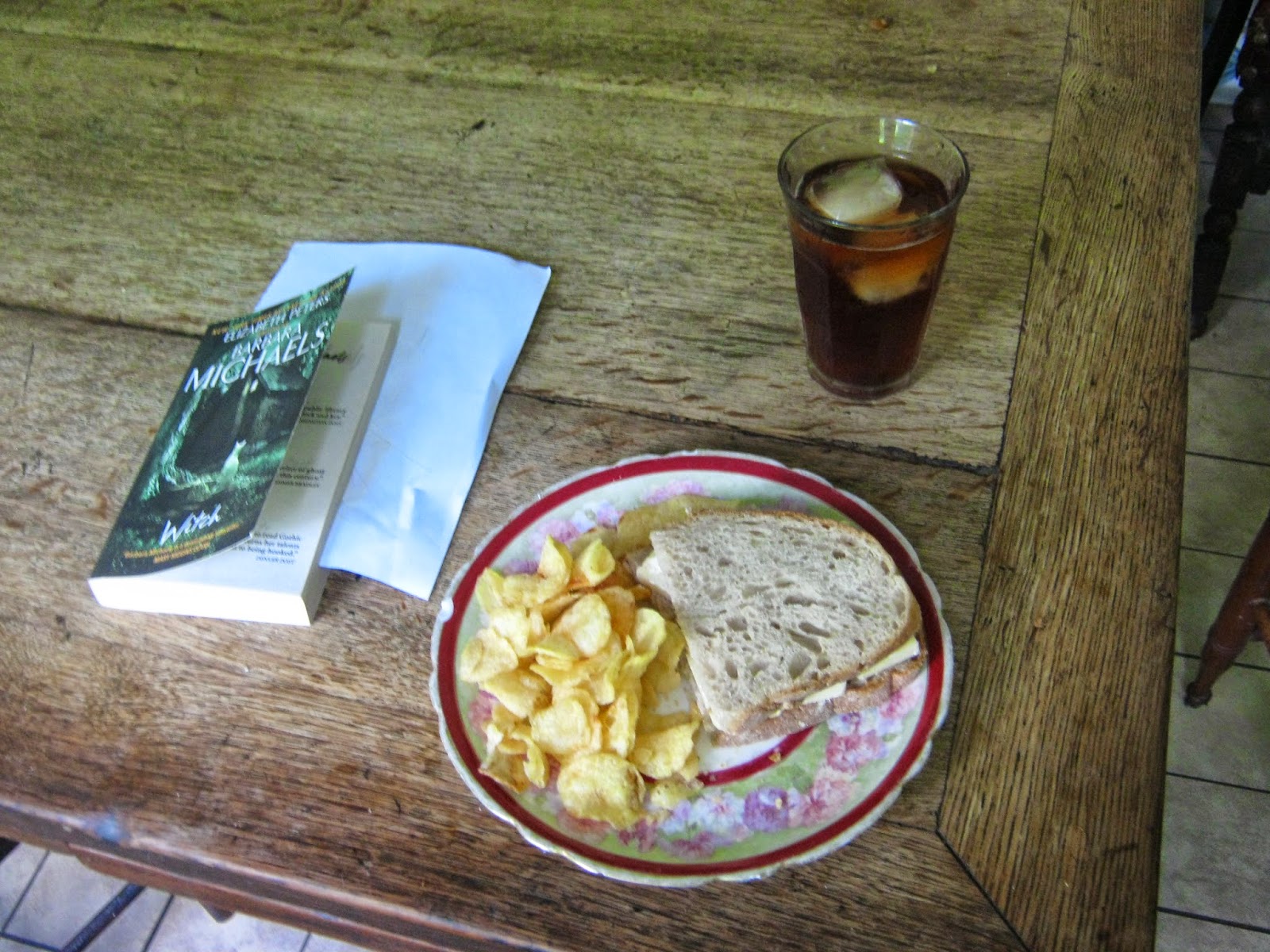 It doesn't even matter what I'm eating (though sandwiches and chips are hard to beat); all that matters is that I'm eating it by myself and reading. No talking, no getting up, no nothing but me, my food, and my book.

So what about about you, my lovelies? What's your happy place in the midst of the chaos?
Posted by Kristin @ Going Country at 10:58 AM 6 comments:

Labels: all about me, Audience Participation Days, fun with food

I was just thinking that it's high time I posted a picture around here. All these wordy words and not a picture to be seen for lo these many days. How boring. But since the only on-topic photo would be of my diseased hands and feet, I think you'll all agree it's best I decided not to post one.

Yes, I have indeed succumbed to the miserable human hoof and mouth disease. It doesn't usually affect adults. Except those of us with compromised immune systems. So it's Winston's fault I got it. And Cubby's and Charlie's fault I was exposed to it. They can all three share in the blame and I hope they appreciate the suffering their mother goes through because of them.

Oh well. This too shall pass. In less than a week--if the children's experience is any indicator--I'll be all recovered and disease-free. In the meantime, we'll all just keep calm and carry on.
Posted by Kristin @ Going Country at 6:16 PM 5 comments:

Yesterday afternoon, Cubby was quite unpleasantly demanding in his insistence that A. must take him out in the canoe. However, due to the hot sunshine and the multitudes of speedboats out on the lake, A. was not keen on the idea. He (somewhat) placated the little dictator by promising they would go out first thing this morning. And then, of course, they couldn't leave Charlie behind, because Charlie is Not Pleased when he is left behind during manly outings.

Hence, this morning was the first all-boys canoe adventure. Though I was all for the uninterrupted time to take a shower and start the laundry and all the other glamorous things I do when unencumbered by children, I was convinced one or both of the children would fall in the water or the canoe would tip or something. Not that this would be life-threatening, thanks to the relative warmth of the water and the life vests they of course wear, but still. I worried a little bit.

No need. Cubby is well-schooled in proper canoe behavior, and Charlie was so thrilled to be going he just sat there and took it all in. A wonderful time was had by all, and I had my shower. Beauty.

After breakfast, A. asked if we wanted to come to the woods with him while he cut up a big oak tree for firewood. The kids were all for it, so into the Subaru we piled and made our merry way to our neighbors' house to cut wood.

We don't have our own woodlot, but our very elderly neighbors a half mile down the road generously allow A. free use of any downed trees on their property. Since their property is about 200 acres, that's a lot of available trees.

Now, when I say "elderly," I mean real, real old. The male half of the couple is, we think, 96 years old. Maybe 97. When we drove past their house, he was walking around to the gully with a shotgun over one shoulder and a dead squirrel swinging from his other hand. I guess it was eating their birdseed, so he decided to eliminate it.

A. hopes to be just like this man should he make it to 97.

The oak tree A. was cutting had uprooted and fallen so that the trunk of the tree was about a foot off the ground, propped up by the roots. This meant that almost immediately upon cutting into it, the released pressure of the cut wood caused the tree to shift and pinch A.'s saw in the cut. To get it out, he had to jack the tree up with my car jack. I just thought that was kind of funny.

The children had a wonderful time leaping off of tree trunks and dumping saw dust all over their heads. Charming. At one point, Cubby wandered a little way into the trees and returned announcing he had touched poop. So I made his rinse his hands with the water from the water bottle while I explained that we don't touch poop and especially wild animal poop, because it can carry some nasty diseases.

My wisdom is extensive and varied, obviously.

Then I brushed off the kids as best I could and hauled them back to the car, the whole time listening to Cubby explaining to me how he was sure that Daddy had gotten my car stuck and exactly how we should go about getting it unstuck.

Needless to say, we were not stuck. We drove right out, came home, and put the children down for desperately needed naps. Canoeing and lumberjacking is obviously exhausting.

So that was this morning. Who knows what wild excitement the afternoon will bring? You just never do know around here.