Calm Reasoning, and the Inevitable Conclusion


After Cubby and Charlie had finished their grilled cheese sandwiches for lunch, I told them to get suited up to go outside. And while they were out there, they could get a sled-load of firewood from the shed for me.

Cubby immediately got a mutinous look on his face and announced very huffily, "No! I won't."

Now this is the kind of attitude that makes me want to let fly with an immediate backhand. I restrained myself, however, and instead went with the Approved Modern Parenting approach.

I knelt down at his eye level (he of course refused to meet my eyes) and told him in a very calm, low voice, "All morning you have been eating the food I prepared for you, wearing the clothes I washed for you, in a house that I have cleaned for you. Your contribution today is going to be getting some wood to keep the house warm."

His response, still with the attitude: "What does getting wood have to do with clean clothes?"

Me, still breathing deep and maintaining my tenuous control: "We all contribute to a pleasant house. Your contribution is getting the wood."

My distinctly un-modern-parenting response: "BECAUSE I SAID SO. NOW GET OUTSIDE." 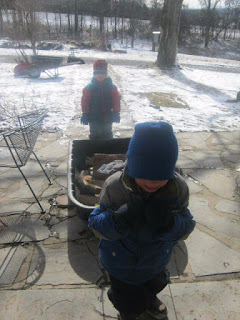 It's the cliched parenting answer from time immemorial for a reason: Because sometimes, "Because I said so," is all that's left to say.

Labels: all about me, country wisdom, Cubby

A. has been improvising his own maple sap evaporators for a few years now, with varying results. Last year's cinder block model was very efficient and fast, but it also produced a lot of smoke. 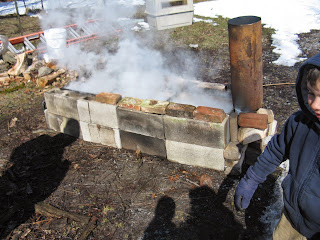 And here we have the cinder blocks and smoke. Plus half of Cubby.

This is noticeable in the resulting syrup. Not that we refused to eat it or anything, but it did have a pretty strong flavor. A. also thinks that the extreme heat that caused it to boil so fast might have even scorched it a little. So it was very dark and strong.

This year he wanted to try making a much lighter and milder syrup, so he made a different sort of evaporator. Out of an extra cast-iron woodstove he had been saving in the shed. What, you don't have an extra woodstove lying around? Of course you don't. But A. did. 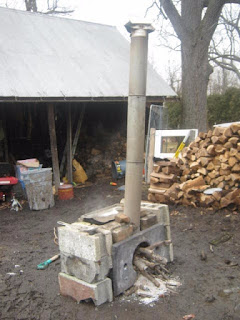 It's possible A. used it just so he could say, "See? I TOLD YOU I was saving it for a good reason."

It's not nearly as fast or as capacious, but it is pretty much smoke-free. The difference in the syrup from it is astounding. 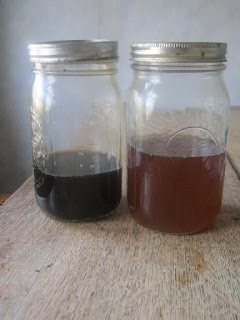 Maple yin and yang? Sure.

Obviously, the color is markedly different, but so is the flavor. The lighter syrup is very mild, with a distinct taste of vanilla. When I tasted some before it was all the way reduced, it tasted exactly like warm cream soda. Part of this is no doubt due to the fact that this was the first sap of the season, which is always lighter and milder, but I also have no doubt that part of it is A.'s new evaporator design.

I'm not really going anywhere with this. I just thought it was interesting. Perhaps you did not, but you read all the way to this point anyway, didn't you? As a reward for you perseverance, I will leave you with one of my all-time favorite photos of my children. 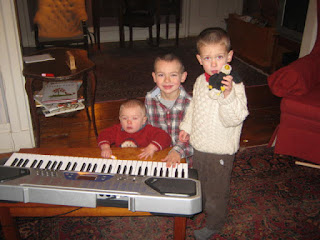 The enthusiastic consumers of any and all syrup, regardless of color.

Posted by Kristin @ Going Country at 8:34 AM No comments:

The Unreasonableness is Breathtaking

Cubby is an extremely intelligent child, and quite logical in most respects. But occasionally, he reminds me graphically that he is, after all, only six years old.

Jack had had a particularly enthusiastic encounter with macaroni and cheese, so I announced I would be bathing him to get the remnants out of his hair, and ears, and everywhere else. Charlie piped up that he hadn't had a bath in the longest time (Saturday night, but who's keeping track?), so he would have the next bath.

Cubby announced that he didn't want to take a bath. Okay, whatever. It's winter. They're covered head to toe all the time and they don't sweat, so they don't bathe much in the winter.

Later, when I finished supervising Cubby's and Charlie's tooth brushing, I said cheerily, "Okay, Charlie! You're already in your pajamas because you had a bath. Only Cubby needs to get his jammies on."

Do you know what my extremely intelligent, eminently logical six-year-old said to that? "Charlie took a bath JUST SO he would have his pajamas on before ME!"

I was so dumbfounded by the irrationality of this response that I couldn't think what to say except, "It had nothing to do with you. Charlie just wanted to have a bath. You didn't. He wasn't thinking of pajamas."

I kept repeating this as Cubby became more and more insistent, whiny, and finally hysterical the entire time he was putting on his own pajamas and shrieking that, "Charlie did it on PURPOSE! To get his pajamas on FIRST! Because he wanted to BEAT ME!"

Eventually I got them into bed and shut the door on this ridiculousness, otherwise I'm sure it would have gone on much longer.

And that, ladies and gentlemen, is the power of competition among brothers. It trumps even a logical mind sometimes. 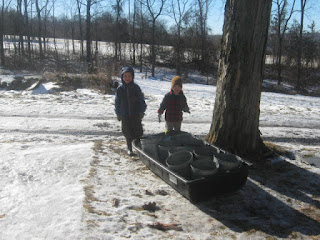 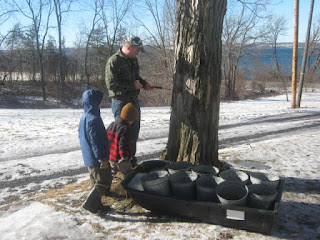 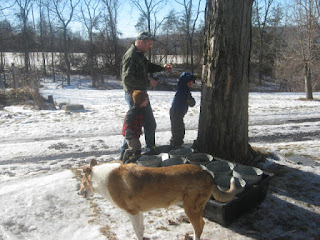 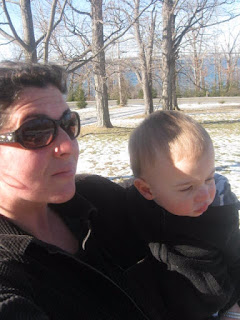