Grossing Out the Grossest

I got a little bit of revenge with Cubby yesterday, though.

When I was gathering trash in the morning in preparation for A.'s dump run, I moved the bag of trash and the trash can in the enclosed porch to find a few dozen maggots squirming around underneath them.

As I really didn't want those maggots becoming yet more flies that inevitably end up in my house, I swept them up and put them in a bucket so I could drown them in water. But then I remembered the chickens. Chickens LOVE maggots. So instead of drowning the loathsome things, I called Cubby over and asked him to take the bucket of maggots to the chickens.

He looked in the bucket, made a face, and stuck a stick through the handle of the bucket, as if the thought of touching the bucket the maggots were in was just too much for him.

So of course, I had to elaborate on how delicious those maggots were for the chickens; how the chickens have never had such a delectable treat; how chickens love nothing better than live maggots.

Friday Food: A Week of Ribs and Randomness

Long version: Beef ribs are always a problem for me. I've yet to settle on a really good way to cook them, and this isn't really the right weather for the slow cooking that seems to work best with them. However, they take up a lot of space in the freezer and we have a lot of them so I took some out anyway to cook.

I just threw them in a covered roasting pan in the morning--still completely frozen--and cooked them at 350 degrees until they were mostly tender. At dinnertime, I spread them in a pan and broiled them with some barbecue sauce on top. They were fine.

Short version: Hot dogs and chips for the kids at the fair, leftovers and eggs for the adults

Long version: This was our big day at The County Fair, and the kids' activities weren't over until 5 p.m. 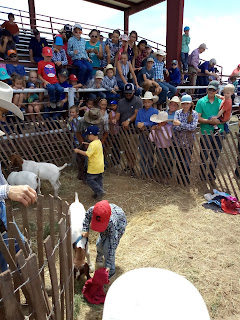 Jack (in the red hat) preparing to dress a goat. The goat was so focused on the hay on the ground that it didn't pay any attention to the t-shirt that was going over its head.

By the time the last activity was done, the boys were starving and A. decided to reward their excellent fair participation with dinner from the concession stand. This is not your normal county fair with tons of food vendors selling fry bread and sausages on a stick or whatever. There is one concession stand and they offer one thing: Hot dogs with potato chips and a soda. So that's what they had.

A. had leftover beef ribs and rice when we got home, and I had some fried eggs. Nobody consumed a vegetable. I don't think we're suffering from a vitamin deficiency, so I didn't worry about it.

Long version: Also taking up a lot of space in the freezer were the packages of ribs from the sheep we butchered several months ago. This is the last of the sheep meat, and it requires A. to be home for a couple of hours to cook it over a fire outside.

To cook them, he marinated them with olive oil, vinegar, and three whole heads of garlic, then dug a pit for charcoal that he constructed a makeshift grill over. 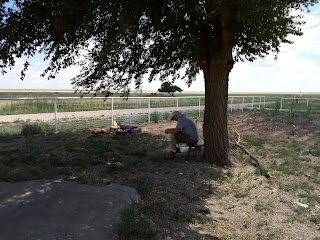 Keeping his lonely rib vigil, with only the horses in the pasture for company.

When the ribs were done, I kept them in a hot oven while I finished mashing the potatoes and dishing everything else up. It's very important with sheep meat, especially the fatty cuts, that the meat is eaten as hot as possible. The fat solidifies quickly when it cools and is very unappetizing when it does.

A. was completely enraptured with his ribs. They were exactly what he wanted. That's the benefit of being the cook.

Sunday is supposed to be the day for a homemade dessert, but we had so many Otter Pops in the freezer from the county parade--this is the only parade I've ever been to where they throw Otter Pops--that I just gave those to the kids for their dessert. No complaints.

Long version: I can't remember the last time we had chicken, so when I saw whole ones on sale at the grocery store, I bought one. Of course, then I had to roast a chicken, which is not appealing when the kitchen is already 80 degrees. I did spatchcock the chicken to reduce the cooking time, but it still got to 85 degrees in the kitchen before it was done.

I rubbed the chicken with an herb butter that included the top parts of the basil I had to pinch off to prevent flowering, chives, and garlic, and it came out very well. Cubby ate an astonishing quantity of it. Maybe his animal project for the fair next next year should be meat chickens.

Long version: The MiL used to make something after Thanksgiving that she called Turkey Slop. It was basically just the leftover turkey heated with the leftover gravy and served over mashed potatoes. I had some really tasty scrapings and juices left in the pan after roasting the chicken, with which I didn't make gravy the night we had the chicken, but which I saved for the next night. This one.

I cooked a bit of extra garlic in some of the chicken fat, then added the saved juices with some cornstarch to thicken and heated the chicken in that. The children ate this with the mashed potatoes, and the raw green beans. These were Charlie's Easter-planted green beans. 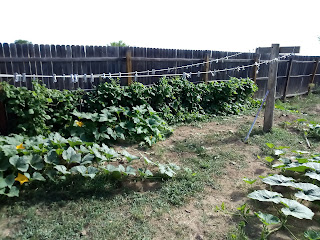 The green bean thicket that ate the fence. And the volunteer squash that's taking over my clothesline area.

The children prefer the green beans raw. Along with most other vegetables.

There wasn't enough chicken left for all of us, so A. and I had the eggs and rice. While we were eating, I mentioned that my mother, who grew up in New Orleans, had rice at every meal as a child, regardless of what else was being served. Which led to me asking A. if his dad had bread and butter at every meal--bread being the starch of choice in the northeast--and him replying in the affirmative, and then the children asking for bread and butter after they finished everything else.

Should've seen that one coming.

Long version: This is really not simmering-all-day-on-the-stove chili weather, but we have a lot of stew meat on hand. So I started the chili at 6:15 a.m., thus ensuring that it was done by 10 a.m., when it was already 85 degrees.

The watermelon was, of course, a seeded one, courtesy of A.'s trip to the outside world on Monday.

No-longer-a-baby picture, apropos of nothing: 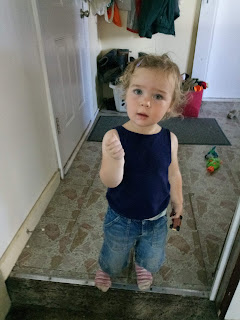 Baby? Where'd you go, and who is this giant toddler in your place?

Long version: Still too hot for a lot of cooking, which is why I just browned a pound of ground beef and then dumped in the remainder of the chili for a very fast taco filling.

The only reason I roasted sweet potatoes is because the oven was on anyway to bake bread. Sourdough doesn't care what the weather is.

(Reserve) Champion of the County Fair


Big weekend here in Extremely Rural America, everyone. This was the weekend of The County Fair.

The County Fair is a big deal here, hence all the capitalization. It's mostly a showcase for the kids, who can enter various kinds of projects, handicrafts, baked goods, and whatever, as well as animals to show.

We didn't have any animals this year, thanks to our month-long absence, but there were still several ways for Cubby in particular to participate.

Cubby is the only one of my kids old enough to do the official 4-H projects, and for each one of those he is required to do some kind of display at the fair. His two official projects were origami and photography.

For the origami display, he did a poster showing the step-by-step folds to make a dog. That got a first place ribbon.

But the real prize winner was his garlic. This was not a 4-H project, because he hadn't chosen gardening as one of his official projects, so he entered the garlic in the open class for agriculture. That means it was in with the adult entries. When we went to look around after the judging, he was thrilled to find a huge pink ribbon on his garlic announcing it the Reserve Champion for the entire vegetable class. 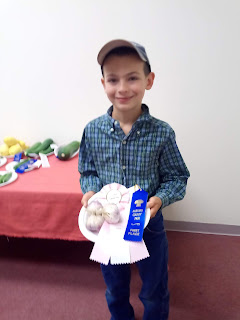 Reserve Champion OF THE WORLD. Or at least the county.

Further glory awaited Cubby later in the day when he won first place in a goat-dressing contest (they just had to get a t-shirt over the goat's head), second place in the calf scramble (chasing calves with paper money rubber-banded to their tails), and first place in steer riding (just what it sounds like).

Cubby excelled in many areas at the fair this year, but of course I'm most proud of his ribbon for gardening. That's my boy.