Santa Claus Is Comin' To Blackrock

The Santa Question has been hovering with renewed urgency this year: Will Cubby believe?

Of late I've been getting the feeling that he kind of wants to believe in Santa. Other, random people have already talked to him about it, asking if he's excited for Santa to come, if he's been a good boy, etc. I have no doubt that if I played it up, talked about it all the time, left out the cookies or whatever, he'd be all over it.

But I can't. My mother asked me the other day, "You can't just lie?" Not really.

So I figured it was time for a talk. Just me and Cubby, mother to son. Just to feel him out a little on what he's been thinking about it.

Me: So, Cubby, tell me about Santa Claus.

Cubby: Well, you can't really see him at night. But you can sometimes hear him.

Cubby: I can't really explain that.

Cubby: I can't really explain that either.

Cubby: I can't really explain any of it, Mommy.

At this point, since there did seem to be some sort of belief already there, I told him that Santa Claus is a part of Christmas for a lot of children, that he sometimes brings surprises for them. I did not say that he brings presents; that Cubby could petition him for gifts; that Santa flies around with reindeer. I just couldn't get into it that far. But I did ask Cubby if he thought Santa might come to our house.

He said yes. So Santa will, some way.
Posted by Kristin @ Going Country at 5:21 PM 5 comments:

The Season of Giving

The super-secret gift making has been in full swing at Cubby's preschool this month.

Except, since we're dealing with three- and four-year-olds here, the secret part goes by the wayside pretty quick. So every day when I asked Cubby what they did at school that morning, I would hear he made a necklace for me. Or a bracelet for me. Or whatever.

Yesterday was the last day of preschool before the holiday break, and we were all presented with a large box full of crafts created by our very own precious babies.

When I asked my own precious baby who all of these things were for, he informed me, "Those are for me, myself."

Right. I think you missed the point there, Cubby.

After we got home and he started pulling all the stuff out to display it to us, I suggested maybe it would be nice if that splendidly decorated soup can went with Daddy to his office, so he could put it on his desk to hold his pens and pencils and think of Cubby all day while he was working. Cubby said, "No. That's mine. It came to MY house, and it is MINE."

So much for the generous spirit of Christmas giving.

P.S. Cubby's teacher made ornaments for all the families with a photo of that family's kid on them. I cannot tell you how much I love her for this. My own parents' Christmas tree is adorned with no less than three photo ornaments of me from various preschools and kindergartens that I attended, so it's like a (narcissistic) family tradition.
Posted by Kristin @ Going Country at 6:20 AM 3 comments:

As is my way, I've been spending the last couple of weeks kind of stressing out about when to do the Christmas decorating. I was trying to find a time when at least one of the children wasn't present (i.e. preschool time or nap time) so I wouldn't be wrestling breakable things away from both children at the same time while maintaining my festive cheer.

And then, as so often happens, I just up and did it. One morning at 7:30, I announced to Cubby, "Hey, we're going to put up some Christmas decorations!" Then he and I raced upstairs all the way to the small attic in the very back bedroom to grab a box of decorations. I tore him away from all the fascinating junk stored in there ("Look! It's my old bassinet!") so we could get back downstairs before Charlie even made it out of the equally fascinating parlor and ascended the stairs.

I highly recommend splitting your home into zones and controlling your kids' access to some of them. When normally forbidden zones are opened to them, it's guaranteed distraction.

That one box was the only one I ever did end up bringing down, but it had enough in it to spread some Christmas cheer.

First out of the box were the hats. Unbreakable, wearable, and immediately commandeered by the children. 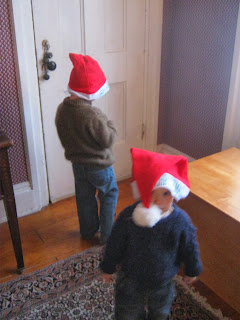 Next I found this random string of big decorative lights the MiL bought a few years ago. I could never figure out a good spot for them, because the bulbs are so big but the string is actually really short. But in my quest to find a spot to hang them where they would be near a semi-concealed outlet and wouldn't get yanked down by destructive gremlins (CHARLIE), I inadvertently stumbled across the perfect place. 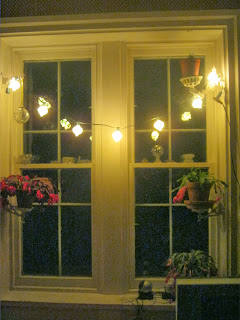 The kids LOVE these lights. It's the first thing they comment on every morning when they come downstairs. Though "comment" is a generous word for what Charlie does. He points and says, "Ba?" Which is what he says for everything, so I don't know.

But what about the tree?

I wimped out this year and went with a tabletop tree again, so I wouldn't spend the holiday season shadowing Charlie to save the tree from imminent disaster.

Because we needed what A. termed "a micro-tree," he just went into the woods and whacked the top off of a pretty small one. I stuck it in a vase filled with broken flowerpot shards and wet sand and once again, called it good. Are you sensing a theme? 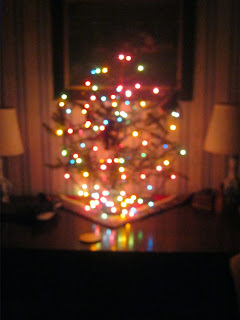 It's actually a pretty terrible little tree, all sparse and weirdly shaped and I don't even have any decorations on it yet, because that requires another trip to the distant attic, but you know what? The kids don't give a damn about any of that; they only see the lights. I think if I put up nothing but randomly looped strands of lights, they would be happy.

You'd think I would have learned by now that trying to do things the way I did before I had kids by doing them without the kids is so not the point. The point is that I do have kids and so should do these things with the kids, however random and chaotic the result.

I'm a slow learner. And that really is a ridiculously ugly tree, but who cares? Not them, and therefore not me.

Merry pre-Christmas!
Posted by Kristin @ Going Country at 4:47 AM 3 comments:

Labels: all about me, Blackrock, Charlie, Cubby, family

Birthdays are all about doing what the birthday person wants to do. So when I saw that the forecast on A.'s birthday called for cold temperatures and many inches of snow, I arranged a special outing for his birthday. 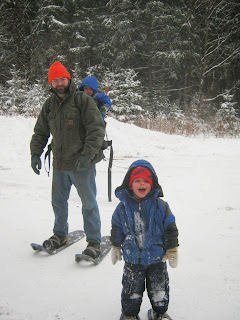 We went snowshoeing in a forest preserve in the hills about an hour from us. There was even more snow there, plus a big pine plantation to block the wind, which is what made the 19-degree temperature bearable.

I was there, too. 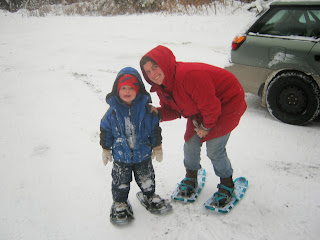 I'm wearing the MiL's snowshoes. I do not own snowshoes, not being a really big proponent of voluntarily leaving the woodstove in such conditions. 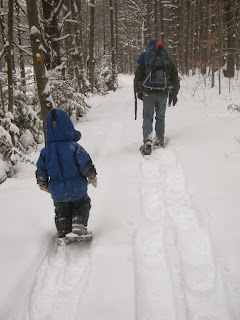 And it was achingly wholesome.

We only snowshoed for about ten minutes--which is quite long enough for a three-year-old's legs--before leaving the path and going a little ways into the woods to light a fire. 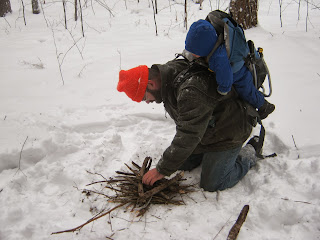 And when I say "we," I of course mean A., with Charlie's supervision.

We released Charlie from the pack in which he had been hanging out quite happily. 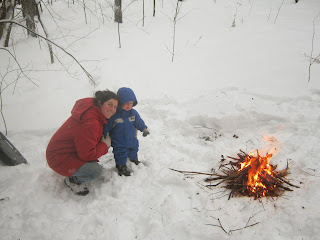 He was not quite so happy standing on his own tiny feet in eight inches of snow, but he was brave. 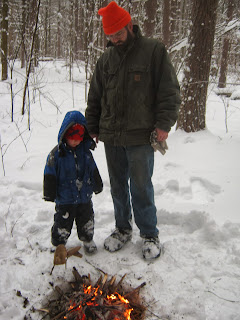 Cubby, on the other hand, was very happy. He suggested we go home to get the Pack 'n' Play for Charlie so we could all camp out there. An interesting suggestion, but no.

Then Charlie soiled himself, so we had to go back to the car, where he got changed in the unheated back of the Subaru and cleaned up with literally frozen wipes.

I'm sorry, Charlie. This is life with the Family Blackrock.

It was a good time anyway, though. And a perfect way to celebrate A.'s birthday.

Get Those Voices Ready

In honor of A.'s 33rd birthday today, it's time for yet another rendition of  "The Woodchuck Man Can."  It's a tradition.

Who can take a rifle and bring home tasty meat?
Who can build a spit to roast a lamb that all our friends can eat?

Who can take a small boy to camp in a canoe?
Who can make tomato stakes with the locust that he hewed?

Who can build a wood crane to operate by hand?
Who can make a boat for stones to haul across the land?

Happy birthday to A., the woodchuckiest man of them all.

P.S. As always, you're welcome to contribute a verse to the song if you're so inclined.