This One's a Real Stumper

Y'all will never guess this one. No, really. I bet you won't be able to figure it out. But I'll give you three tries. You ready? Okay . . .

Guess whose pillow FROZE TO THE GODDAMN WALL Thursday night.

Go ahead. Think about it. Mull it over. Consider all the possibilities. I'll wait.

Okay! Let me solve this little riddle for you:

* If you guessed mine, you're right!

* If you guessed only WE would be crazy enough to live in a house where such a thing is possible, you're right!

Think warm thoughts for us.

P.S. You can still enter for the $25 Amazon gift certificate. Just comment on this post.
Posted by Kristin @ Going Country at 6:10 AM 21 comments:

Labels: all about me, Blackrock, confessions, randomness, the A team, weather

Okay, so that is probably the WORST post title ever. You'll see why.

As I mentioned yesterday, it's a wee bit chilly (there's number 1!) outside. Not so warm inside, either, for that matter. Except by the woodstove. Which is cranked up and ripping all day long. And since the woodstove is hot all day, and is, in fact, a stove, doesn't it make sense that I could cook on it? Turns out, I can.

I wish I could say this came to me in a flash of blinding brilliance, but it actually came to me rather slowly and stupidly as I sat in my chair by the woodstove last weekend watching a pan of water simmer to de-crystalize maple syrup. It was the MiL, not me, who thought to put the pan on the woodstove. And as I sat there, it very slowly dawned on me that if water will simmer on the stove, why not food?

Yeah, I'm not so swift sometimes. So I waited for a really cold day when I would have the woodstove roaring all day anyway and could therefore simmer something. Like chili (there's number 2!).

That day was yesterday. The chili was actually Cincinnati-style chili, which is really weird for a person only accustomed to Southwestern-style chili, because Cincinnati chili calls for blanching ground beef (oh yes) and adding all kinds of spices like cocoa and cinnamon and chile powder (aaaand, number 3! okay, I'm done with that lameness now--forgive me) . And then serving over spaghetti. With cheddar cheese, onions, and kidney beans on top. WEIRD. But I wanted to try it. So I made the recipe in "Cook's Illustrated's Best Recipes: Soups and Stews."

I did the initial steps, with the blanching and the sauteing of onions and all, on the conventional stove so I could adjust the heat quickly. But for the hour and a half simmer, I plopped the pot right onto the woodstove. And there it simmered. 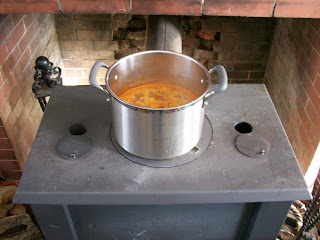 And it did indeed work. When the woodstove is really cranking, the temperature on the surface is about equivalent to medium-high on our electric stove. That's hotter than I expected. I actually had to close the dampers a little bit so I didn't scorch the chili. Which ended up being delicious, by the way.

Maybe NEXT, I'll harness the power of the woodstove to heat the old-fashioned sad irons we have and iron A.'s shirts! With boiled starch I make myself with the potatoes!

Yeah, maybe not. Let's not go overboard with the pioneer spirit here.

Labels: all about me, Blackrock, fun with food

In case anyone missed the screaming, hysterical headlines, WE'RE IN THE MIDDLE OF A COLD SNAP! OHMYGOD--WE'RE ALL GOING TO DIE!!!!!!

Or something to that effect.

Yes, it is cold. Ten degrees this morning when A. got up at 4:45 a.m. (specifically to check the temperature, because he gets all excited about extreme winter readings), and the forecast is calling for below zero weather tonight. But . . . so what? This isn't Siberia. Or even Alaska, where it got to almost 70 degrees below zero one winter when we were living near Fairbanks. Now THAT is cold. This? Not so much.
Thankfully, we don't really worry too much about our pipes freezing. It's about the only thing we DON'T have to worry about, because the stone walls are so damned thick. Of course, the walls in the north bedroom are frozen over, but that's old news by now.
The only real drag with this kind of cold is keeping the animals supplied with liquid water. None of the animal shelters are electrified (unless you count the chain of extension cords that runs to the chicken coop to power the heat lamp--when it's working), so we can't use submersible heaters or heated buckets. There's only one warm place on this property: the house. And there are only two warm rooms in the house.
The dining room: 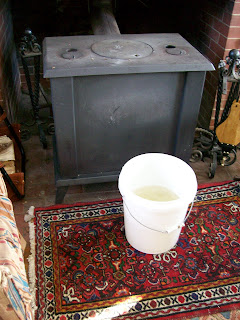 Where the sheep's bucket goes to thaw. 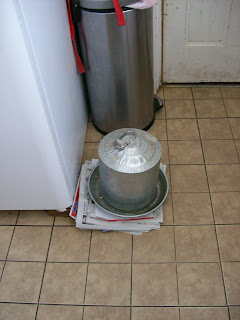 Winter home of the chicken waterer.

I don't even bother trying to keep any water for the dogs outside. They're just as happy to come into the kitchen to have a drink and a nap on their couch.

So, our pipes aren't frozen, so the humans have water. Thanks to my constant schlepping back and forth with frozen and thawed water receptacles, the sheep, chickens, and dogs have water.

Have no fear for the inhabitants of Blackrock. We're survivors. And I have a suspicion that the rest of America will survive the cold temperatures as well. Just try to tell CNN that.

And Then There Was One

This is what it comes down to. After months of labor, days of canning, gallons of sweat: The Final Tomato. 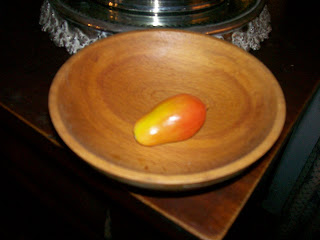 This tomato came from a plant that was planted in the garden in May. This tomato was harvested on October 19, 2008. Three months ago. This thing has been sitting on my kitchen counter for three months. How? How is this possible? I do not know. A deal with the devil? The fountain of youth?

Whatever. When I conquer my vague feelings of uneasiness at its life-prolonging powers and eat this weirdo, I will win this thing once and for all. It's only a matter of time. I can outwait this tomato.

Labels: all about me, fun with food, gardens

Hello, poppets! You're never going to believe what day it is. I could hardly believe it myself.

Did you catch that? That's 300 posts. Hundreds of photos. Thousands of words. And all with no plan or coherence whatsoever! Wheee!

In celebration of my inexhaustible ability to blather about inconsequential matters on a daily basis, and in gratitude for all of you who stop by here regularly (especially those of you who comment--hinthintcoughcough), I'm going to do something I've never done before.

I'm going to have a giveaway.

Yup, because I am a generous, big-hearted, veritable saint of a woman (except minus the miracles and ministering to lepers and plus the babbling about myself every single day), I'm going to send one lucky person a $25 gift certificate to Amazon.com. That way, the winner can buy whatever his/her little heart desires. As long as his/her little heart doesn't desire anything that costs more than $25, that is.

1) I love you, Kristin.
2) I think you're the funniest writer since Erma Bombeck, Kristin.
3) Do you ever plan on talking about anyone but yourself on this site, Kristin? (Answer: no)
4) Does anyone else think this Kristin broad is a complete nutter? (Answer: yes)

But only one comment per person, so make it a good one. I'll enter any comments posted before, oh, let's say . . . Sunday, January 18, 2009, at midnight EST. The WINNAH! (this is how this word sounds in my head--my crazy, nutter head) will be chosen randomly by a yet-to-be-determined method. Most likely having A. draw a number out of a hat or something equally professional. And I'll announce the WINNAH! on Monday, January 19.

Update: If you're going to post your comment anonymously (which someone already did--hi, Anonymous!), make sure to sign with a name at the end of the comment. ANY name. You could make it up if you want, but it will be easier then for me to distinguish between the anonymouses (anonymi?) if there end up being, like, five of you.
Posted by Kristin @ Going Country at 5:50 AM 40 comments:

He doesn't just think outside the box--he doesn't even know there is a box.

After the big storm we had Saturday night, A. conceived of a brilliant plan. He figured out a way to plow our driveway. Without a plow.

Now you KNOW I'm all for plowing our driveway, because that means I don't have to shovel it. But his plan was so weird, so odd, so . . . woodchucky.

He attached an old bed box spring to the rear of Big Red by means of an old logging chain and dragged the box spring down the driveway. And I'll be damned if it didn't work. Really well. 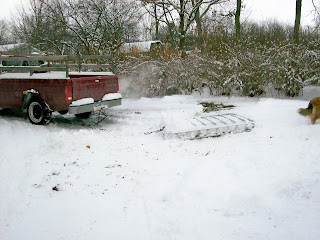 Seriously. What can you say about this?

His brain truly works in mysterious ways, but I got a plowed driveway out of the deal, so here's to the woodchuck snow plow! And to A., the biggest woodchuck of them all.

I'm sure you all remember what it looks like around here after a big snowstorm, so there's really no need for me to keep posting photos of it, is there? I can just tell you six inches of snow fell last night, and you'll be able to visualize the result, right? Right.

Of course, we were prepared. We filled the sheep's manger to the roof with hay yesterday and I brought in a ton of wood yesterday afternoon right after the snow started. Good thing, because there are few things more dispiriting than having to flail through the snow in your robe when you first get up to dig out the woodpile so the fire doesn't go out. But because I thought ahead and stocked up, I now have, oh, a couple of hours to sit by the fire and drink my coffee before I need to shovel out the woodpile to replenish the wood supply. Hurray for OCD!

And with that pleasant thought, I bid you all adieu with this blessing: May your wood always be plentiful and your fire always burn bright. Amen.
Posted by Kristin @ Going Country at 6:16 AM 3 comments: