Long version: I made this meal for only the children and me, because A. and his friend were planning on camping during his elk hunt*. The mozzarella sticks were part of the box of food Ray left for us a couple of months ago. They were pretty gross, but a fun novelty for the children, who had never had them before.

The laziest marinara sauce ever was four chopped plum tomatoes A. got at the store that were going bad, garlic powder, dried oregano and basil, and a bit of vinegar and olive oil. It was the laziest ever because I put it in a Pyrex dish and microwaved it together before mashing it with a fork. You know, it really wasn't bad. And one must have marinara sauce with mozzarella sticks. Even gross ones.

I made the brownies even though it wasn't a Sunday/dessert day because it had been raining all day and the kids were all mad that A. was hunting without them, and well, do I really need a reason to make brownies? Not really. 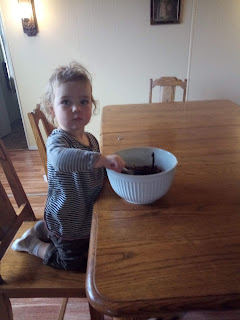 With a gravitas perhaps inappropriate to brownie-making. 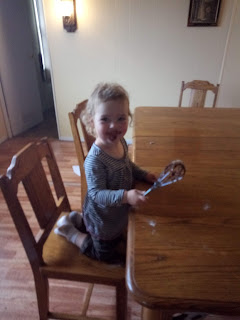 Until we got to the licking-the-beater part. Then she was allll smiles.

Long version: The beef was a big rump roast that I cooked in the morning, then shredded and fried in sheep tallow with garlic, salt, pepper, and paprika. My standard operating procedure with large chunks of meat these days.

The pumpkin was one of our mediocre ones, but they are conveniently accessible in our backyard rather than sixty miles away, and free, so that makes up for any lack in taste.

I served this food to A. and his friend when they got home from an unsuccessful day of hunting at 9 p.m. A.'s friend said the garlic bread was the best bread he'd ever had in his life. I always think this myself when I eat it, but it's nice to have it confirmed by an unbiased eater.

While I was cooking, the children were entertaining themselves with the large bag of pistachios in the shell that Rafael gave us. 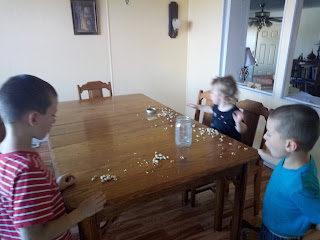 Why is it that "entertainment" for children is so often synonymous with "making a godawful mess"?

Long version: I had one small zucchini left from Rafael, one small onion, about a dozen green beans from the failing green bean forest, and a few small tomatoes, plus a clove of garlic. Calling it a melange sounds much fancier than "random vegetables."

Long version: We got home even later than on a normal Monday, thanks to the first 4-H meeting of the year. I decided it was a good night for leftovers and MREs.

A.'s friend who came to hunt with him is a Marine, and he brought some MREs ("Meal Ready to Eat"--given to soldiers when they're out somewhere without a mess hall) with him. The children were fascinated by these, of course, so he left a few for them. The packets have all these little packs of things like protein bars, crackers, and gross "cheese spread," as well as an entree that can be heated with this little chemically-heated packet that goes right inside the plastic pouch that contains it all.

The funniest thing about MREs is they take 15-20 minutes to heat up that way, so I actually had food on the table for the non-MRE eaters (me, Poppy, A., and Charlie) before the MREs were ready.

Cubby and Jack elected to try the "chicken with tomatoes and feta" meal, which came with "cornbread stuffing," and actually tasted remarkably like a Lean Cuisine meal. I do not consider that a compliment.

They both gave up on it after a few bites and instead had some leftover hamburgers.

Long version: The pork chops were those weird "country ribs." I had to cut some of them to make them thinner. I just roasted them with a spice rub, and they were fine.

Long version: Yes, we just had cheeseburgers on Sunday. But it's the fastest way to cook ground beef, and Wednesday is a work day for me, so cheeseburgers it is again!

I made extra boiled potatoes Tuesday night and fried them in the leftover pork fat from the pork chops with lots of salt, pepper, garlic powder, and paprika. So good.

Long version: A. used most of a beef rump roast to make beef jerky, and I used the bony pieces that were left to make beef stock. I also cooked some pinto beans, so when the stock was done, I made soup with it by adding sauteed onions and garlic, carrots, celery, the beef I pulled off the bone, the beans, potatoes, and some of my frozen green chiles.

It was very tasty, but a little bit too spicy for me.

This was the day before a hard freeze--very hard--so I spent some time during the day harvesting all the tomatoes. I had a little help. 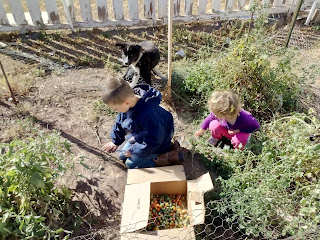 And when I say "help," I am not referring to the puppies, who kept hopping that fence and trampling all over the tomatoes and licking the children. Not helpful.

We also harvested the rest of the squash: 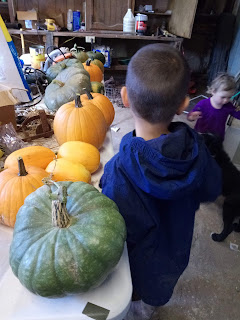 With which we created a Festive Fall Arrangement in A.'s shop.

Last we pulled up the basil plants and made one more batch of pesto for later. I saved a few leaves for the tomato salad. The last fresh basil until next summer. A slightly melancholy moment, as always.

* They ended up coming home late to sleep in the house, though, because it had been raining all day and they were soaking wet and it was about 50 degrees outside. Good call.


It's that time of year! The time of year when the Internet is awash with photos of children wearing sweaters and being all adorable in pumpkin patches.

I have a contribution to that category this year.

Poppy and I went to the pumpkin patch today and she picked out her very own pumpkin. 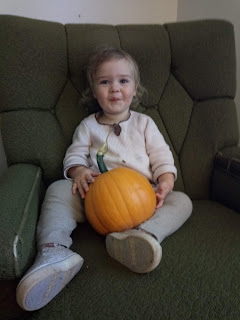 She was quite pleased with herself.

You will note that my toddler+pumpkin photo is not actually in a pumpkin patch. That's because the patch is the backyard under my clothesline, which is currently riddled with gopher holes and decoratively accented with dying green bean plants.

Actually I don't have a picture in the pumpkin patch because I didn't have the camera with me when Poppy and I went out to water my newly transplanted sprouting broccoli and took a detour to pull a pumpkin off a dead vine.

It was quite a heavy pumpkin, but Poppy insisted on carrying it inside by herself to show Daddy. Which is when I actually got the photos of her with it, in my chair in the corner of the living room. 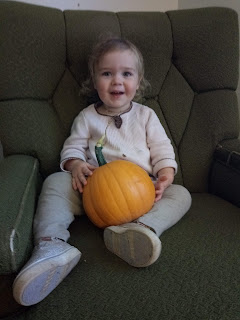 All smiles with her pumpkin.

The smiles turned to tears when I had to confiscate the pumpkin because she was sure it was a toy and kept carrying it around and dropping it. Since I do actually want to eat these pumpkins rather than play with them, I put it safely in A.'s office for storage.

Poppy was not pleased that I took her toy away. Good thing there are about a dozen more in the backyard.

There are no wagon rides or corn mazes at our pumpkin patch, but then again, it's free and right out our back door. Can't beat that.