Long version: Small pieces of elk sliced thin, then fried in bacon fat. Same as the day before, because when I take a bag of elk out of the freezer, I have . . . a lot of elk to use.

The pasta had a sauce made of the last of the pizza sauce from a few days previously, plus butter cream cheese, and the pasta water. It was kind of a miracle I remembered to save some of the water before I drained the pasta. I almost always forget. It does help with these kinds of thicker sauces, though, to thin them out a bit.

Long version: As is my habit when I'm anticipating temperatures at or over 90 degrees, I did most of my cooking the morning. The chili, that is. Then, at dinnertime, all I had to make was some rice. Which was a good thing, because by dinnertime, I reeeeally didn't want to be messing around with food AT ALL (it was a challenging day with the children), and I was very grateful all I had to do was heat things up, prep some toppings, and throw some bowls and spoons on the table. 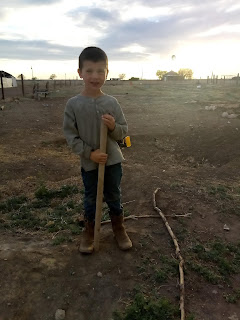 Sure, they look all adorably western in their cowboy boots and jeans, but get the four of them together and they can cause some serious irritation in their mother.

Long version: With the hot weather, the children were wishing we had ice cream. That is not so easy to get here 90 miles from anywhere, but we did have quite a few bananas from A.'s grocery store run the previous week.

Whenever I put "bananas" on a list for him, I brace myself for excessive quantities of bananas. This time I think he bought 12.

So I had enough bananas to make that fake ice cream with frozen bananas. I always have to add some milk or cream to loosen it up, and I also always add cocoa powder. Sometimes I add peanut butter, although I didn't this time.

The school Sysco program offers bananas, but I haven't gotten any yet because they only offer them in ten-pound boxes. I thought that was too many, but it occurs to me now that I could freeze a lot of them in chunks and thus ensure our fake ice cream supply for the summer. Based on the complaints from every single child because they only got one serving of it, they would approve of this.

Short version: Grilled cheese sandwiches, cucumber spears, and yogurt for the kids, leftovers for me

Long version: One of the newer offerings from the school Sysco program is frozen fruit. That's why I have two five-pound bags of diced strawberries that I can use with abandon in the children's yogurt.

Such abundance! Is this what it's like to shop at Costco? 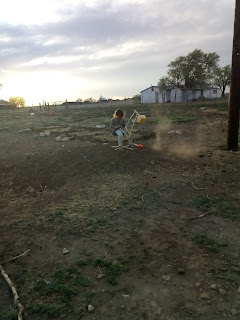 The construction site, with Poppy manning (womanning?) the digger.

Long version: Feliz Cinco de Mayo! In celebration of the holiday, I made my children crispy tacos.

Okay, so really it was just because I happened to have my griddle pan still on the stove from the grilled cheese sandwiches I made for lunch, and it still had some butter on it, so I decided to warm up the store-bought tortillas on the griddle pan instead of in the microwave.

Three out of four children loved the crunchier tacos. Only Charlie didn't, but that was mostly because he started eating a full ten minutes after the rest of us--a disagreement we had about the appropriateness of wearing his tiger get-up of paper whiskers taped to his face and toothpicks duct-taped to his fingers--and so his sat on the pan a lot longer.

This was the best of all possible taco worlds, because we had both avocado AND fresh lime. Grocery stores are wondrous places.

Long version: Both A. and Cubby were in raptures over the sheep ribs, which were just marinated and then baked at 300 degrees for like 5 hours. The meat was pretty good, but OH THE FAT. Evvverywhere during clean-up.

Which is why the ribs taste so good, of course. At least, that's what A. thinks.

Long version: I definitely bribed the children with popsicles so they would clean Charlie and Jack's room (a.k.a. The Toy Room) well enough so I could vacuum it. I was totally planning on making the root beer and cream kind, though, because all that requires is mixing prepared ingredients and pouring it into the molds.

When I offered my popsicles for clean room trade, however, Charlie said, "I'll do it if the popsicles aren't those root beer ones. Those don't taste quite right."

So then I had to cook frozen strawberries with sugar and water and haul out the food processor to puree it all, then add in cream and vanilla, and THEN pour it into the molds.

They were really good popsicles, though.


Although there are many things I do well, building things is not one of them. Never hand me a hammer and expect something usable to come from my efforts. In fact, it's entirely possible I will end up with an unusable, exploded thumb.

But if you need something cobbled together out of cardboard boxes and duct tape? I am your woman.

Luckily for the chicks, a bigger home for them fell within my scope of building. That is, I could duct tape some pieces of cardboard to one of the old drawers we took out of the bunk bed to make the drawer higher and voila! A chick house. 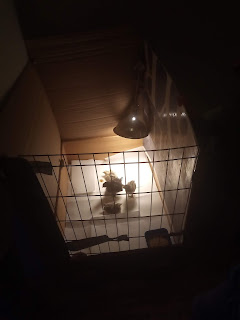 And for better photos.

On the other end, with a solid piece of cardboard there and the heat lamp, the chicks can get into a warmer area if they feel cold.

See? Not only am I a general contractor, I am an architect. And I didn't have to pick up a hammer.