Friday Food: A Rather Random Week


I feel like I was all over the place with cooking this week. Some weeks are like that.

Long version: I was out of eggs and almost out of cheese, which left me with beans and tuna.

I made some pinto beans, into which I added most of the extra sauce from the chili from a couple of days before. I roasted a sweet potato, a bell pepper, and an onion, and ate all that together with the beans and some sour cream for my meal.

With the tuna, I made a skillet thing with onion, celery, tuna, mayonnaise, shredded cheddar, and green peas. A. ate that. The kids also ate that, with some of Miss Amelia's sopaipillas on the side. We had gone to bring her some bread earlier in the day and walked in just as she started frying sopaipillas. So the kids got to eat fresh, hot, homemade sopaipillas with honey at Miss Amelia's house, and she sent some home with us, too.

Long version: A. used the stock he had made from the sheep bones to make one of his pigs' feet/hominy/chili stews. So he ate that.

For the brisket, I just browned it and then dumped in sliced onion, some canned tomatoes, mustard, ketchup, apple cider vinegar, and a little maple syrup. This made something that tasted more or less like barbecue sauce. I cooked the brisket in the oven for several hours. Not as long as I was going to, though, as I checked on it at 1 p.m. and realized that the oven had stopped working.

Appliance Man to the rescue!

A. spent some time looking at repair videos online and took the oven apart to clean out the igniter that was apparently covered with ash. Such a useful man, that A.

I didn't bother putting the brisket back in, though. It was pretty much done, so I let it cool, then sliced it and re-warmed the slices in the sauce at dinnertime.

Long version: Fry it all in bacon fat and call it dinner. The end.

Long version: We went to a dinner sponsored by the county's American Legion and they had a really impressive spread of food. There were three kinds of enchiladas--red with beef, green with chicken, and green with cheese--pinto beans, chips and salsa, tortillas, and various kinds of desserts.

My only complaint is that there were about eight different kinds of desserts, and not a single one contained chocolate.

Then again, I didn't have to cook or clean up, so in the end, I have no complaints at all. Thank you, American Legion.

Okay, most important thing first: That salad? MY LETTUCE. 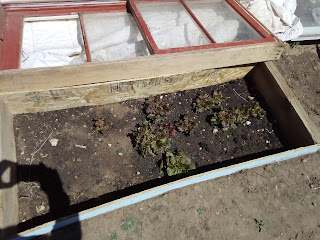 You can see that I have waaay fewer plants than I started with, but the cold had its way with everything but the ones planted under glass.

No matter. I'm eating homegrown lettuce in April. Thank you, A.

Miss Amelia's leftovers were enchiladas, Spanish rice, pinto beans, and some eggs in red chili sauce that she sent over. The eggs were kind of an odd texture, so I threw them out--sorry, Miss Amelia--and used the sauce instead to cook the cube steaks (browned, with onion and garlic). Because I had the oven on for awhile to cook the cube steaks, I also baked the sweet potato and a beet (saved for a later meal) and then I also thinly sliced the half an onion left from the meat and put that in a dish with a bunch of butter and salt to caramelize.

I will definitely do that with onion again. Yum.

The kids ate the enchiladas and rice, A. ate his stew with some added cube steak, and I ate a salad with the cube steak, sweet potato, onion, and some leftover cooked carrots and green beans.

Long version: The vegetables were the leftovers from my assigned "healthy snack" that I brought for Jack's class Easter party. The children were shocked and amazed that I bought baby carrots.

I know. Lazy and shameful. 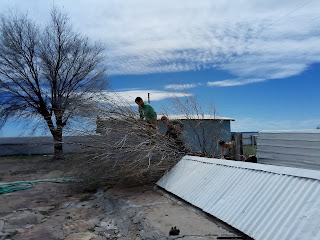 These boys are not lazy. Or rather, these monkeys climbing this tree are not lazy. And they really like baby carrots. Don't get used to them, monkeys.

Long version: Another class party, this time for Cubby and Charlie, although I was not assigned a healthy snack for this one, so I made brownies and chocolate-chip-cookie bars.

We did not have those for dinner.

I was kind of out of energy to make much for dinner. Sauteed pork chunks, rice, and green beans seemed manageable. And thus it was done.

Okay, your turn! What'd you have for dinner?


For the past two years, Cubby has played baseball. He was pretty good at it, and seemed to enjoy it, and we thought maybe he'd play here, too.

Then the flyer came home for baseball sign-up and we realized that him playing would mean driving something like 200 miles or more every week. Because everything is so spaced out here, you see. His actual team would be based out of the village ten miles away. But the home games were played in a town 60 miles away, and the away games? Forget it. They could be as far as 100 miles away.

That's much too much driving, time away from home, and disruption for the entire family for a sport that they don't even offer in the high school.

So we had to tell him that he would not be playing baseball. He was somewhat disappointed. We were talking with him about the sports he could do in school when he's older, and the one he seemed most interested in was track.

This is when I remembered a few months ago when both Cubby and Charlie had asked me if they could do a road race. So I told Cubby that he couldn't play baseball, but he could run a 5K. So could Charlie.

They were very enthused about this.

The closest one I could find that was around the right time of year is in Santa Fe* on May 18. It's a 5K that encourages families and children, and even has a special 1K race for the smallest kids. That meant that Jack could also "run" a race and not feel left out.

At first we all assumed that A. would be running the 5K with the older boys, and I would do the 1K with Jack and Poppy. A. went with Cubby and Charlie on their ritual Sunday-after-church run this past weekend (which is only a mile, but serves the dual purpose of getting them out of the way while I make waffles and getting some of their pent-up energy out after sitting for an hour) and returned lamenting that he was not really in good running condition at the moment.

So I decided to go for a mile run and see what kind of running condition I'm in at the moment.

Though I've run off and on for my entire adult life, the last time I went running was right before I got shingles. Seven months ago. And the last time I ran three miles? I don't even know, but certainly years.

These days I spend more time than I would like in this chair being weighed down by 70 pounds of flailing children. 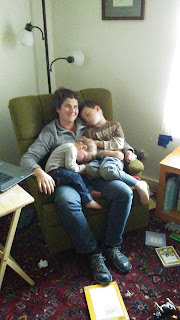 Or by the dead weight of sleeping children, but in the chair in any case.

Those children do ensure that I'm not entirely sedentary, but I was still doubtful as to my endurance when actually running for any length of time.

However, I was pleasantly surprised at how not-punishing it was to run that first mile. I probably could've gone a little farther, but I decided to quit while I was ahead.

When I got home, I told A. that I would run the 5K with Cubby and Charlie. He seemed delighted at the prospect. Unsurprisingly.

But of course, one mile is not three miles. I needed to increase my distance pretty quickly. So yesterday, I ran two miles. Again, it was not as hard as I had expected. The older boys will be joining me for this same two-mile run on Friday morning so they can start increasing their distance, too. I'm hoping that we'll be up to three miles in the two weeks before the race.

Of course, Santa Fe is a lot hillier than here, and also about a thousand feet higher, so it's possible that on May 18, I'll be sucking wind on the road while trying to keep up with two spry boys, but at least I have hope now that I can run it without completely embarrassing myself.

* Not that Santa Fe is close exactly, but distances out here are relative. This does mean that we're going to have to get up at like 4 a.m. on race day to make it there on time. Whee.


I seem to have been taking a lot of photos lately and then doing nothing with them. And so . . .

It snowed all day on Saturday. 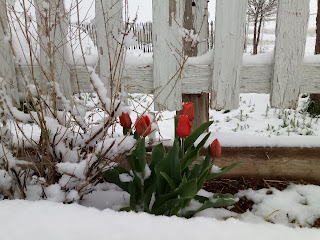 The tulips were brave. 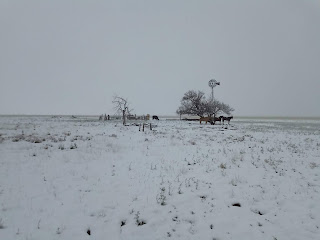 As were our neighbors across the street: the horses and bull. 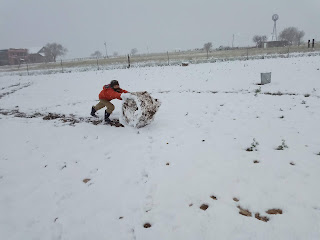 The boys were thrilled with the enormous snow balls they could roll. This is Cubby. 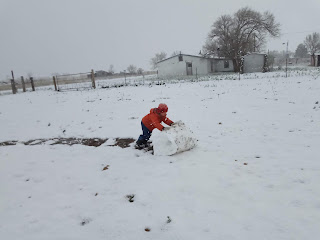 And this is Jack. 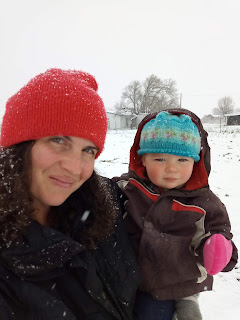 Then yesterday, it was sunny and 70 degrees and all the snow was gone. The boys chopped down two and a half trees. 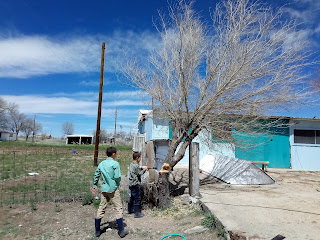 Because A. told them they could, not because they just went to town with the hatchet. Though I wouldn't put that past them.

Meanwhile, Poppy gave some of the farm animals a bath in a bucket. 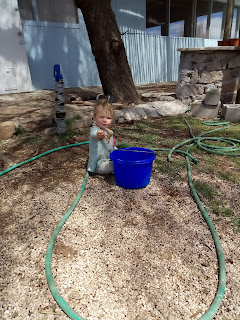 Safely out of range of any falling trees.

And that's pretty much it. I think you're all caught up now. Over and out.