When the Stars Align

And A. is at a bonfire with his high school buddies . . .

Then I get one night with just me, a bar of extra-dark chocolate, and Can't Buy Me Love on Netflix.

And that, my friends, is my idea of perfection.
Posted by Kristin @ Going Country at 7:03 PM 5 comments:

Three Boys and a Bench

A few months ago, I decided I wanted a bench in between the beds in Cubby and Charlie's room. So I e-mailed my dad, the (not amateur) carpenter extraordinaire, and asked if he could make me one. Because I can do that, because he is awesome. 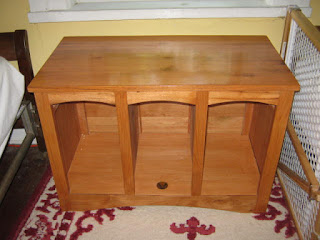 Ta da! It's like magic. And it didn't get broken into a dozen pieces this time by FedEx. Hooray.

I unpacked it outside initially, so I wouldn't have to haul the box and everything back down the stairs. Cubby and Charlie discovered that Nana had packed those nifty cubbies with a few surprises for them. 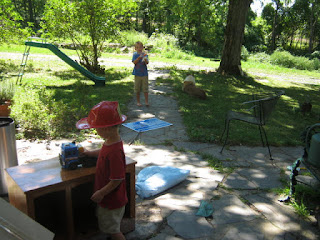 Then I hauled it upstairs and put it under the window between the beds, where it fit perfectly. Because that is the beauty of custom-built furniture. 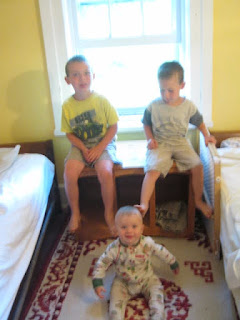 Another beautiful part of custom-built furniture? It can be built sturdy enough to withstand the climbing of two small boys. One of whom appears to be trying to pet the baby on the head. With his foot. Nice, Charlie.

My dad also included a very amusing letter for Cubby and Charlie explaining that this particular bench was built with wood A. scavenged from a torn-down dairy barn, so it smelled like cow poop. Cubby and Charlie loved this, of course, because they are small boys and the idea of a poop bench is hilarious to small boys.

Not My Finest Moment

When I took Cubby to the doctor for his before-school physical last week, he had to get some vaccinations. Unfortunately, one of them was the tetanus one, which goes right into the muscle and hurts like hell. And even more unfortunately, they were out of the chicken pox vaccine and we had to go back when they had received the new shipment of the vaccine.

Our appointment for that vaccine was this morning, so Cubby has had five days to brood about getting another shot. He brought it up periodically, with a dramatic little shudder and an, "Oh noooo! Not another shoooooooot!"

He does tend towards the dramatic, so I didn't pay too much attention to it. I should have, though, because when we got to the doctor and he was sitting on the table with the nurse at the ready with the needle, he flipped. right. out.

Meanwhile, I had Jack down on the floor of the exam room while I held onto Cubby, with Charlie next to Jack, and I did not have the time to spend talking Cubby down off this particular unreasonable ledge. And we sure as hell were not going to be coming back another time with all three children in tow.

So I sat on a chair and pinned him in my lap while the nurse gave him the shot.

He was fine as soon as the needle went in. It was just the anticipation, I guess. I felt really terrible about how it all went down, and I thought maybe I should have prepared him better, or taken his anxiety more seriously, or something.

But then I thought that he had to have that shot to go to school and I had two other small children to deal with at the same time, so the pinning him down option still seems like the best way to go. Because in the end, I'm just that cold-hearted, I guess.

Let's hope the flu shot in October isn't so fraught with drama, however.
Posted by Kristin @ Going Country at 10:40 AM 8 comments:

Big day for Jack yesterday: It was his maiden voyage in the pack. 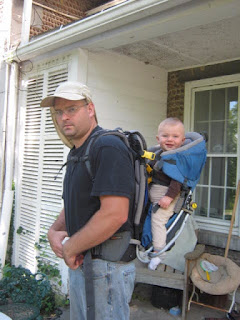 He was very excited. So was A.

Big day for me, too, because when the day comes that someone else can carry an infant for me, I feel as if a great literal weight has been lifted. And of course, I'm much more likely to want to do things involving walking, since I only have to carry my own weight. So yesterday we walked up the (dry, thanks to no rain) gully next to our house and found a very nice muddy swimming hole for the older children to splash around in and pretend to be dinosaurs fishing. At least, I think that's what all the roaring was about.

Charlie, incidentally, had no issues with Jack in the pack, unlike Cubby when Charlie started riding in the pack. Charlie was all, "Whatever. That pack is for babies. I have to walk so I can attack things with my spear." This is the difference between the first and second born.

It's the beginning of a new era. An era of less back pain for me, I hope.