A Little Trivia for You

In case you ever find yourself in possession of a pound and a half of basil (and that, my friends, is indeed a shitload of basil), you should know that that amount of basil will make an even three ice-cube trays of pesto.

Of course I speak from experience. Last week's Fun with Food Processing included subduing the chard jungle (by blanching and freezing) and ruthlessly whacking down the basil plants. Don't ever let anyone tell you that basil only thrives in hot, dry conditions. We've had nothing but cool, rainy weather this summer, and those basil plants are basil bushes. Because the tomatoes are still showing no signs of ripening (come on, Mama N.--a little help in the sun and heat department please), I haven't been using the basil much. But it was getting really out of hand, and showing imminent signs of flowering (this is bad if you want it to continue to produce all summer), so I advanced upon the basil bushes with my knife, cutting off most of the plants and ending up with a huge colander stuffed full of basil leaves.

Then I stripped all the leaves from the stems, dug up a head of garlic, and made pesto. This is the first year I've done the freezing in ice-cube trays thing, and it worked nicely. All my little pesto cubes are now reposing in a freezer zipper bag, awaiting their turn to enliven spaghetti sauce and boiled potatoes in the dead of winter. And I have that virtuous feeling that comes from taking care of a garden chore that's been hanging over my head.

It doesn't take much to make me feel virtuous, obviously.
Posted by Kristin @ Going Country at 6:30 AM 4 comments:

Labels: all about me, confessions, country livin', country wisdom, fun with food, gardens

The Woodchuck Gets the Last Laugh

A.'s little adventure with the woodchuck under the washing machine had some consequences. Consequences that involved the washing machine flooding the cellar floor with the draining wash water one day, and then, after A. thought he had fixed it, continuously draining the water filling the machine so that the water just kept running and running and running. For, like, an hour. At which point I went down into the cellar to see if my wash was done. To discover that the machine hadn't even filled and the water was still running. The warm water. At least, it had been warm, until the hot water tank was drained. So we had no hot water until about four o'clock yesterday afternoon. And the repairman has to come to fix the machine, which means at least a $50 bill from him.
The woodchuck may have perished, but he didn't go out without causing some damage. Well-played, Mr. Woodchuck.
Posted by Kristin @ Going Country at 6:09 AM 1 comment:

Howsabout I Shut Up and Post Some Pictures Already? 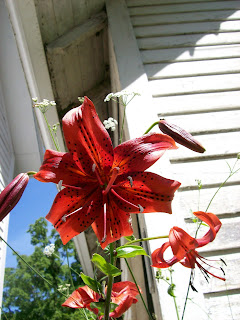 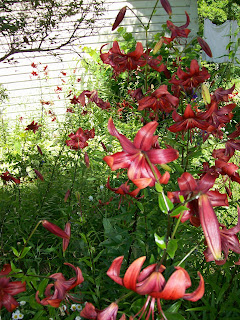 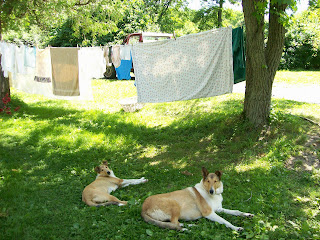 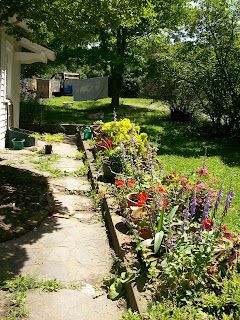 The Battle Rages On

Yesterday afternoon A. and I were upstairs when we heard frenzied barking from downstairs. We ran downstairs, eventually discovering the three big dogs circling the washing machine in the Pit of Despair. A., being the brave and courageous one, grabbed a flashlight and went down to investigate further. I, being the sissy one, stayed on the top part of the stairs ready to flee into the house and slam the door if anything flew out from under the washing machine.
You'll recall that I have some justification for being wary of the washing machine.
We could hear whatever it was that was cornered under the machine. A. said it sounded like a rattlesnake. We don't have rattlesnakes here (THANK GOD--as if I don't have enough to worry about), and I suggested that it sounded like an animal chattering its teeth, which some animals do as a warning when they're mad. Like woodchucks. One of the many useful pieces of knowledge I have acquired since moving here.
Sure enough, A. and his flashlight discovered a large woodchuck pressed up there behind the washing machine, chattering angrily at the three big dogs. And at A. when he tried to poke it out with a piece of pipe. At least, that's what he told me he was going to do. I didn't actually see it, because I had retreated upstairs and shut the door by that time.
What a pansy I am.
Anyway, after a minute I cautiously opened the door and asked A. if he wanted me to get the dogs out of there so he could take care of the woodchuck. He, however, being a sensible sort of man, decided there was no point in him risking getting bit when there were three large dogs right there salivating to tear that woodchuck into pieces for him. So he lifted the washing machine about a foot, whereupon Leda the Fluffball launched herself into the narrow opening and pulled out the woodchuck. I was standing at the top of the stairs, where I couldn't see what was happening, but I could hear. There was a brief skirmish, and then the woodchuck was no more.
Leda is not a dog to be trifled with. Makes you look at Lassie in a whole new way, doesn't it?
Incidentally, Otty was right there on the other side of the machine, positioned like a proper member of the hunting pack to get the woodchuck if it tried to retreat that way. And where was Mia? Standing at the bottom of the stairs, watching. Not so much a hunter, my dog. Unless there are baby rabbits. She's fierce with those baby rabbits.
That's the second woodchuck Leda has dispatched in the past week. I can only hope that any woodchucks remaining in the area have enough good sense to stay off our property. They can come to no good end here as long as Leda is around.
Posted by Kristin @ Going Country at 5:58 AM 8 comments:

How To Make a Woodchuck Happy

Give him a truckload of cowshit-encrusted lumber for free. It will TOTALLY make his week. 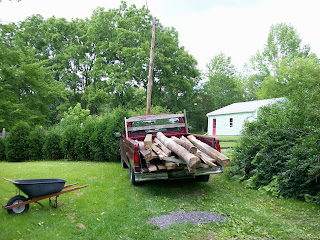 Just ask A.
P.S. And speaking of woodchucks . . . I got the impression that some of you thought the woodchuck in this story was alive while the dogs were chewing on it. NO. It was DEAD. It got floppier because they ate parts of it. Eating dead woodchucks is quite disgusting enough--I wouldn't let them gnaw on an injured animal. Just so you know.
P.P.S. A winning name has not yet been chosen. Keep on wracking your brains! (Where did that come from, anyway? "Wracking" your brain? It sounds painful.) (I looked it up. One meaning of "wrack" is "complete ruin." Definitely painful.) (It can also be spelled without the "w.") (Are you tired of parentheses and italics yet?) (Too bad.) (HAAAAA!!!!)
Posted by Kristin @ Going Country at 5:33 AM 2 comments:

Who Says Alcohol Is Only for Fridays?

Not me! Today is a Monday, and we are breaking with tradition to talk about alcohol today instead of on a Friday because the MiL created a new cocktail last night. She mixed the elderflower champagne with gin in a martini glass and added a couple of ice cubes. And it was damn good. A. and I tasted her drink and agreed that it was really surprisingly tasty.
You'll remember that the last time we created a new cocktail, I enlisted your assistance in naming it. And so I think I must solicit your suggestions yet again for this new cocktail. Since the MiL created the drink, she'll be the one to choose the best name this time. So she's the one you have to impress with your creativity and appropriateness.
Y'all ready? Let the naming begin!
Posted by Kristin @ Going Country at 5:37 AM 10 comments:

Okay, I don't know how many times I have apologized for not having a photo of something. But I've decided I'm not going to apologize anymore. You're just going to have to accept the fact that I hate carrying a camera around with me, and I really hate taking photos of people at events, so unless I set out with a specific photo in mind, there will be no photos of the events I attend.
This is why there are no photos of the village festival that occurred Friday and Saturday. There were community parties and a parade and jousting (yes, on real, live horses) and bands . . . and I have zero photographs. Because I was too busy enjoying the events.
BUT. I suspect you may be happy I'm not a camera nut when I tell you that the dogs killed a large woodchuck yesterday and then took turns gnawing on it. The woodchuck got progressively floppier as the dogs passed it around, until Mia ended up with it and polished it off. There are no photos of that, either. You're welcome.
Posted by Kristin @ Going Country at 5:45 AM 9 comments: