Cubby went to bed at 6:30 yesterday evening, in an attempt to just end the misery of the day that started at 4 a.m. and didn't really improve thereafter. I crossed fingers and toes that he would be able to stay asleep for longer than two hours at a stretch.

I guess I should have crossed my eyes, too.

At the 1 a.m. wake-up, I was determined to find something that would alleviate this suffering. Both his and mine. Thus the following conversation:

Me: Cubby, do you want some water? It might help your cough.

Me: Well, do you want to get into Mommy and Daddy's bed?

Me: Do you want to go downstairs and sleep in the guest bedroom bed with me?

Me: Do you want me to lie down with you in your bed?

Me: I have some medicine here that will help your cough (Vicks VapoRub) . . .

Right. How am I supposed to minister tenderly to a child that's still ornery and curiously contrary even when he's miserable?

The story of my life as Cubby's mother.

P.S. One amusing moment in an otherwise very unamusing night: Around 2:30 a.m., I heard Cubby straight-up yelling in his room. This sounded to me more like a bad dream than anything sickness related, so, being pretty done for at this point, I sent A. in to calm him down.

A. came back into our room saying he thought maybe Cubby was having some kind of fever hallucination and that he was talking to people in his room. I got up to talk to Cubby and feel his forehead. It was a little warm, but nothing remarkable. When I inquired, he told me he had a very bad dream. About Charlie taking his toys. He was yelling at Charlie in his sleep. A nightmare indeed, and very logical in light of the fact that Charlie's reaction to Cubby's unaccustomed weakness has been unrestrained glee and bullying. More on that later.
Posted by Kristin @ Going Country at 4:55 AM 3 comments:

The cold that Cubby has had all week may not be the worst cold in the world, as he proclaimed, but it's certainly no trip to the beach. Poor little dude had one of those nights last night when all the nastiness in your head drains down into your head and you can't sleep. You know those nights. He woke up crying every couple of hours. After a soothing whisper-singing of "Twinkle, Twinkle Little Star," he managed to go back to sleep the first three times.

I did take pity on him at four this morning, though, when he woke up crying that he was too sick to sleep and wanted to wake up. I know that feeling too well when in the grip of a nasty, snotty cold; the only remedy is to get up, no matter how tired you may feel, and let your head drain.

So we got up. Half an hour and a cup of very sweet tea later, he revived long enough to tell me about his friend Turtle's tomcat, named Tommy Cat. Apparently he has a sickness, too.

Join the club, Tommy Cat. Charlie started coughing and dripping yesterday, and I've been fighting this thing off (and losing) since Wednesday.

It's super fun around here, as you may imagine.

But! Lest you think this is going to spiral down into a snot-filled whinge-fest (too late), allow me to access my inner Pollyanna and detail the reasons that it was good timing for Cubby to be home sick this week.

A.'s Roadmaster is still at the mechanic. Yes. STILL. Three weeks and counting. Apparently they're rebuilding the transmission with parts forged by hand in Kazakhstan and transported to upstate New York by yak. Or something similarly slow.

Anyway, this means that A. has been using my car to get to court and his office and everything else. Since the only thing I need my car for is to get Cubby to preschool three days a week, Cubby not going to school has meant that we could avoid the musical cars we've been playing with the Subaru and the MiL's car for the past two weeks.

Also, due to that incredible snowstorm we got on Wednesday and the ensuing mess on Thursday, preschool has been canceled for two of the three days Cubby usually goes anyway. So he didn't really miss much this week.

With the exception of last night, Cubby sleeps more when he's sick. So I've been getting some good long naps and early bedtimes this week.

The only really unfortunate result of Cubby's illness this week is that it has prevented me from getting to the Small City to pick up my brisket. See, I had to special-order a brisket from the butcher for corning. St. Patrick's Day is coming right up, and you know I can't go back to a store-bought corned beef this year after last year's triumph.

Unfortunately, we haven't bought a whole cow in awhile and thus don't have a brisket handily sitting in our freezer for corning. When I was in the Small City on Saturday, I stopped at the butcher to get one, but they had to order one for me. It was supposed to be there yesterday, but I couldn't get there to pick it up.

I think St. Patrick's Day is going to be celebrated on March 19 at Blackrock this year. The brisket has to brine for five days, so we will adjust our holiday celebration accordingly. It's an arbitrary date anyway, right? Right.

And now that I've rambled on for far too many paragraphs about snot, broken cars, and brisket, I think I will take my leave of you. Have a fabulous Friday, my lovelies, and keep on keepin' on.

Labels: all about me, Cubby, fun with food, randomness

Some Random for Your Wednesday

Cubby came down with a cold yesterday. Literally came down, as in came down the stairs in the morning hacking and complaining of a headache. He proclaimed it, "The worst cold ever in the world."

He may not know the meaning of the word "hyperbole," but he sure is an ardent practitioner of it.

He was so subdued yesterday that he refused to go outside, even though it was 56 degrees and sunny. Bummer. Charlie and I really wanted to be outside in that glorious taste of real spring weather, especially since our forecast was calling for twenty degrees colder today and a foot of snow.

It is currently dumping snow as I write this, and has been since nine o'clock this morning, when the rain turned into sleet, which turned into gloppy snow, which turned into just snow. It's not supposed to stop until late tonight. Ah, spring in upstate New York. So delightfully schizophrenic.

I'm still working my way through my newest DVD of pain, and I am forced to accept the fact that I just plain suck at lunges. In pretty much any form. Every time I'm supposed to be doing jumping lunges or alternating lunges or side lunges or whatever the hell else that apparently requires more coordination than I have, I just give up and do static lunges. In my defense, the lunges are always combined with some kind of weight lifting arm exercise, and it's apparently more than my feeble brain can handle to make all those movements happen correctly at the same time.

Speaking of which, I am now due for my daily failure at lunges, so off I go to don my gross workout clothes and enjoy my time off from the children. Have a lovely Wednesday.
Posted by Kristin @ Going Country at 9:35 AM 2 comments:

Labels: all about me, Cubby, weather

This past Thanksgiving when the MiL was in the midst of a big dining room cleaning, she decided to wash all the silver on the sideboard. It's a coffee service, with many little pots, some of which have lids. Inside these were my camera cord and the USB drive on which I had stored all my photos.

The MiL didn't know those things were in there when she submerged the silver in water.

I just now found the USB drive again (it had been brought upstairs along with a bunch of other miscellaneous stuff that was in a bag in our bedroom) and plugged it into my computer without much hope that any of the photos had survived their little swim.

They did. All of them. That's pretty impressive.

So now I have the fun of going through all the old photos on the USB drive and finding ones like this: 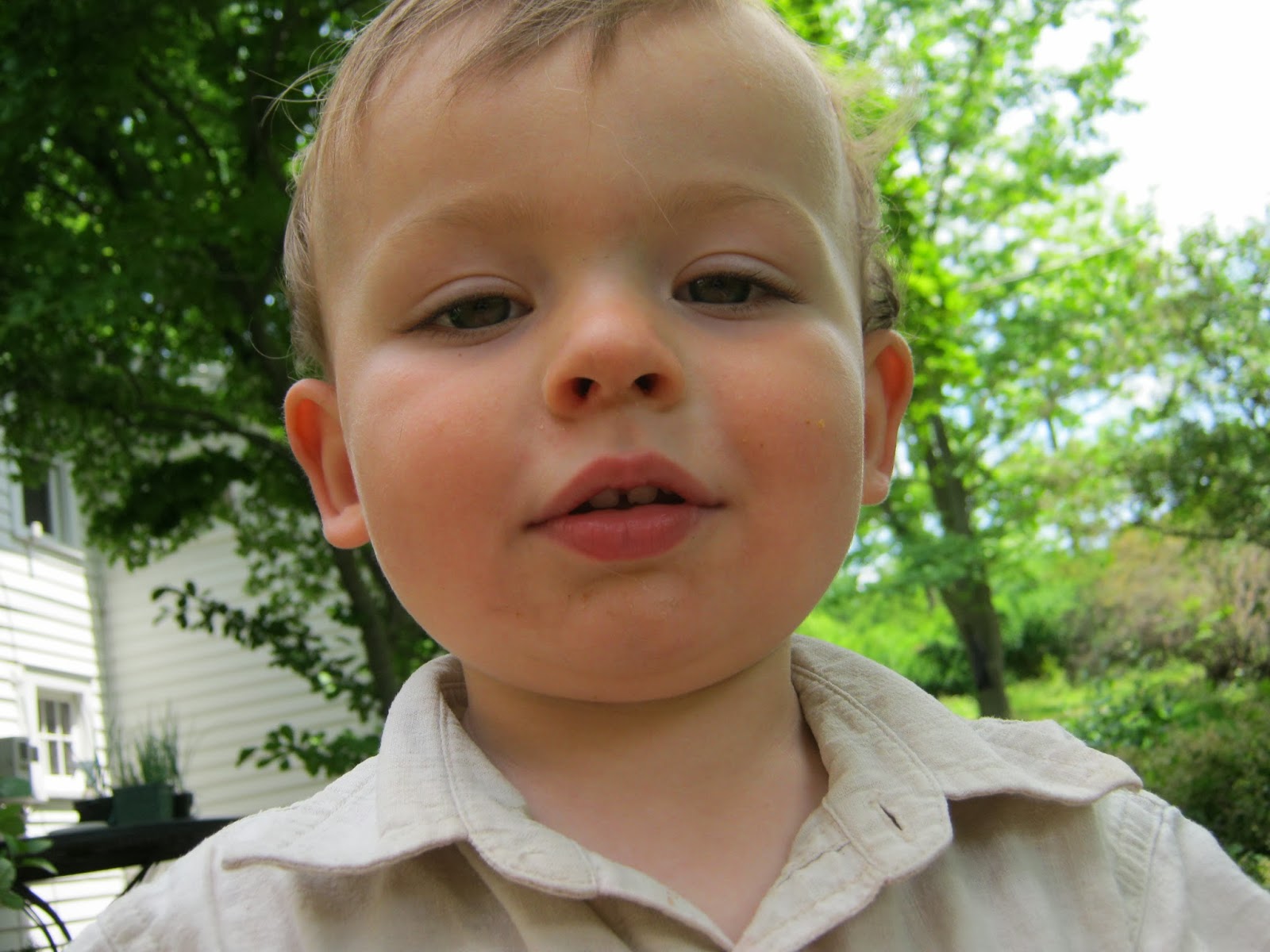 This is Cubby when he was just a couple of months younger than . . . 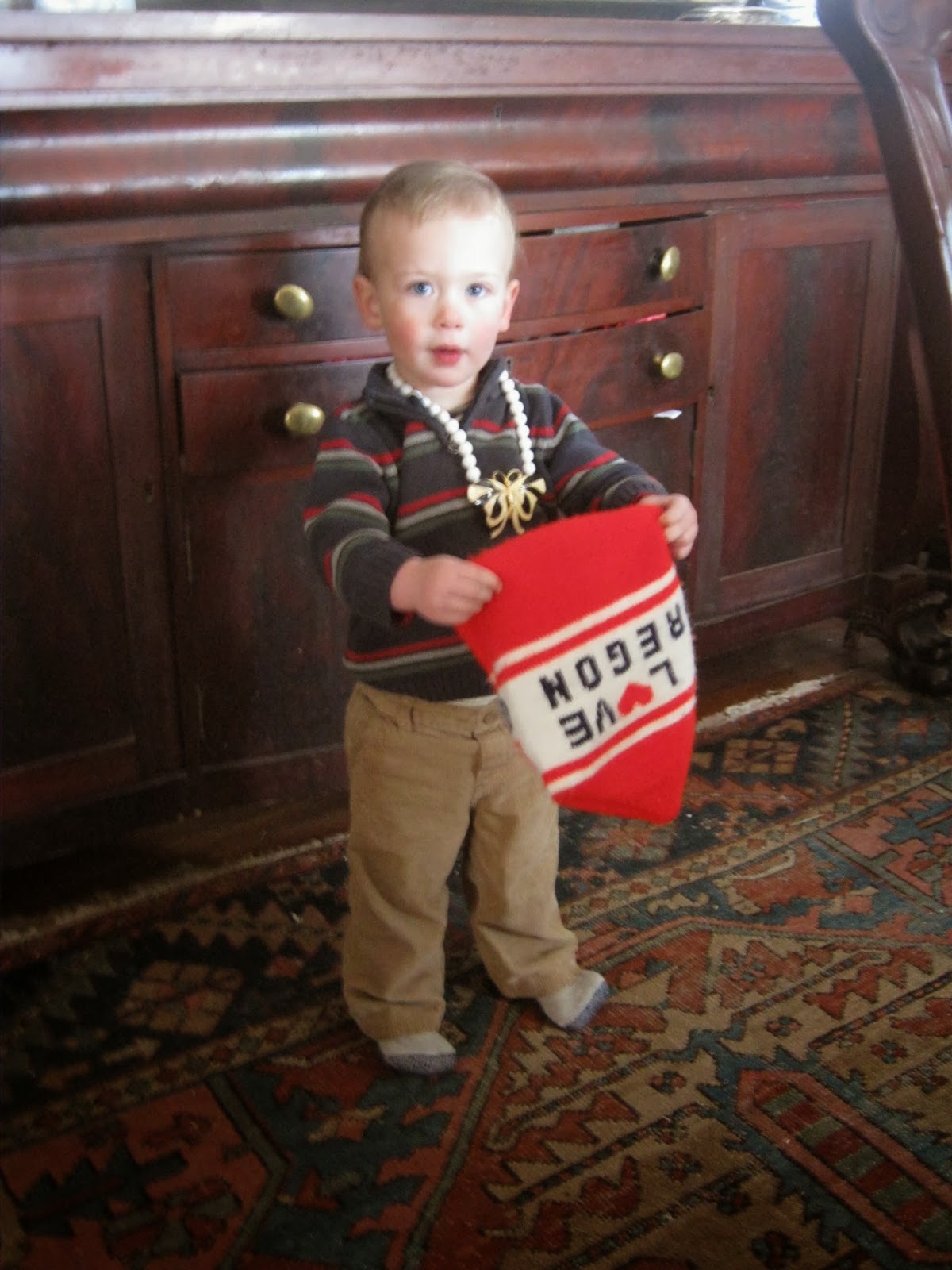 This stylish little dude is now.

They don't look much alike, but they do share a love of accessorizing.