Cubby of the North

An interesting thing about winter: It's pretty fun if the weather is sufficiently cold and snowy.

That probably sounds counterintuitive, but it's not. If it's cold, the snow stays dry and, well, snowy. As opposed to wet and slushy and icy and wretched. And if there's snow, there's snowshoeing and sledding and other fun winter stuff. A warm winter just means mud and rain, which is no fun at all. But snow and, most important, sufficient cold? Why, then there can be ice fishing. 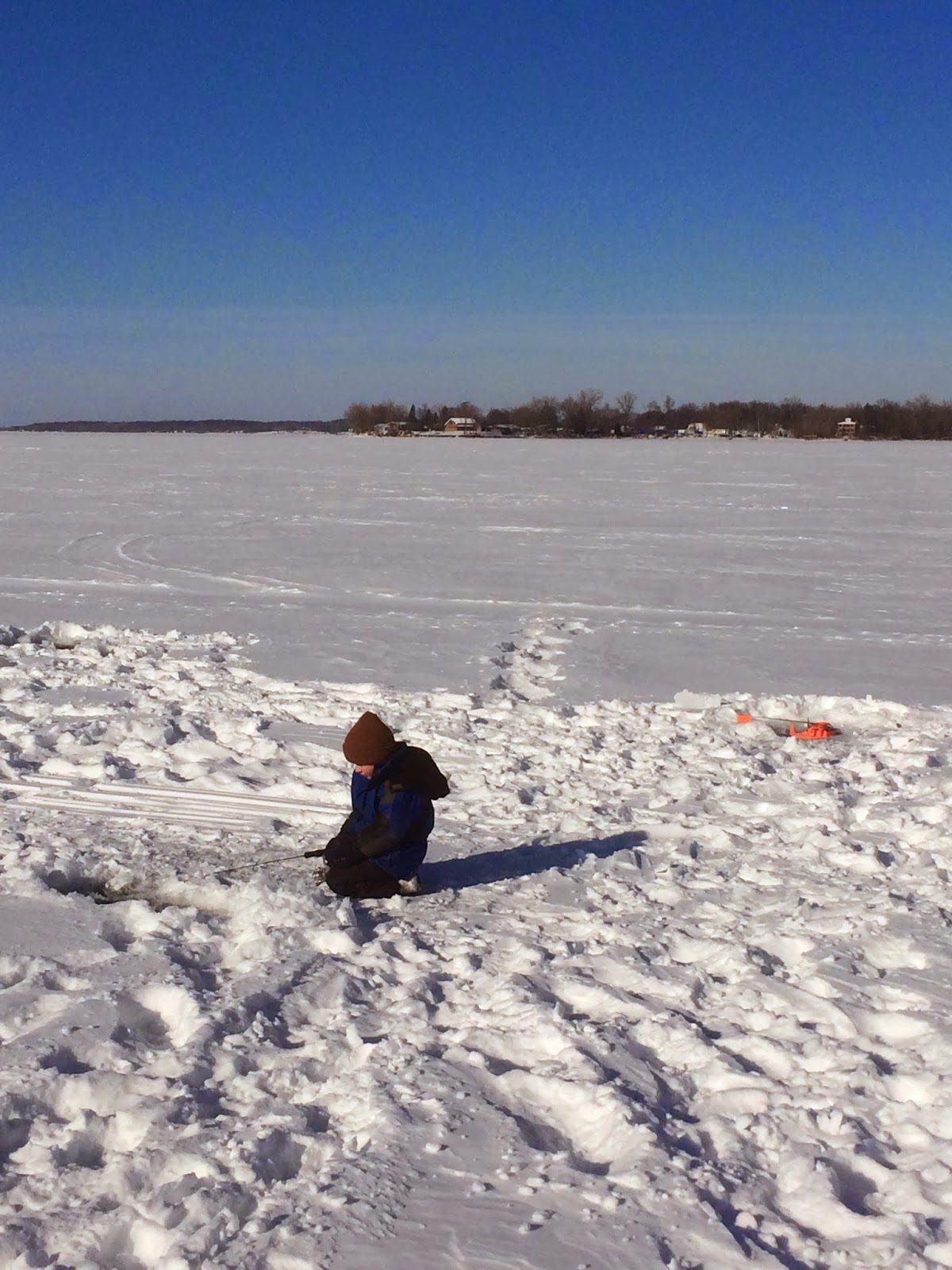 Although our lake isn't frozen right off our beach, it is frozen at the north end, where it's more shallow. So Mr. Jason and A. made plans to go ice fishing there on Wednesday. And if you think they were going fishing without Cubby, well then, you don't know Cubby and his demands very well.

Mr. Jason and A. were out on the ice all day. Cubby joined them after preschool and a nap. I brought him and Charlie to the shore of the lake, where A. met us with the utility sled. A. and I pulled the kids out to the spot where Mr. Jason and A. had set up their equipment. It was a little over half a mile. This doesn't sound like a long way.

It is. Especially if you're trudging through soft snow while pulling a loaded sled. 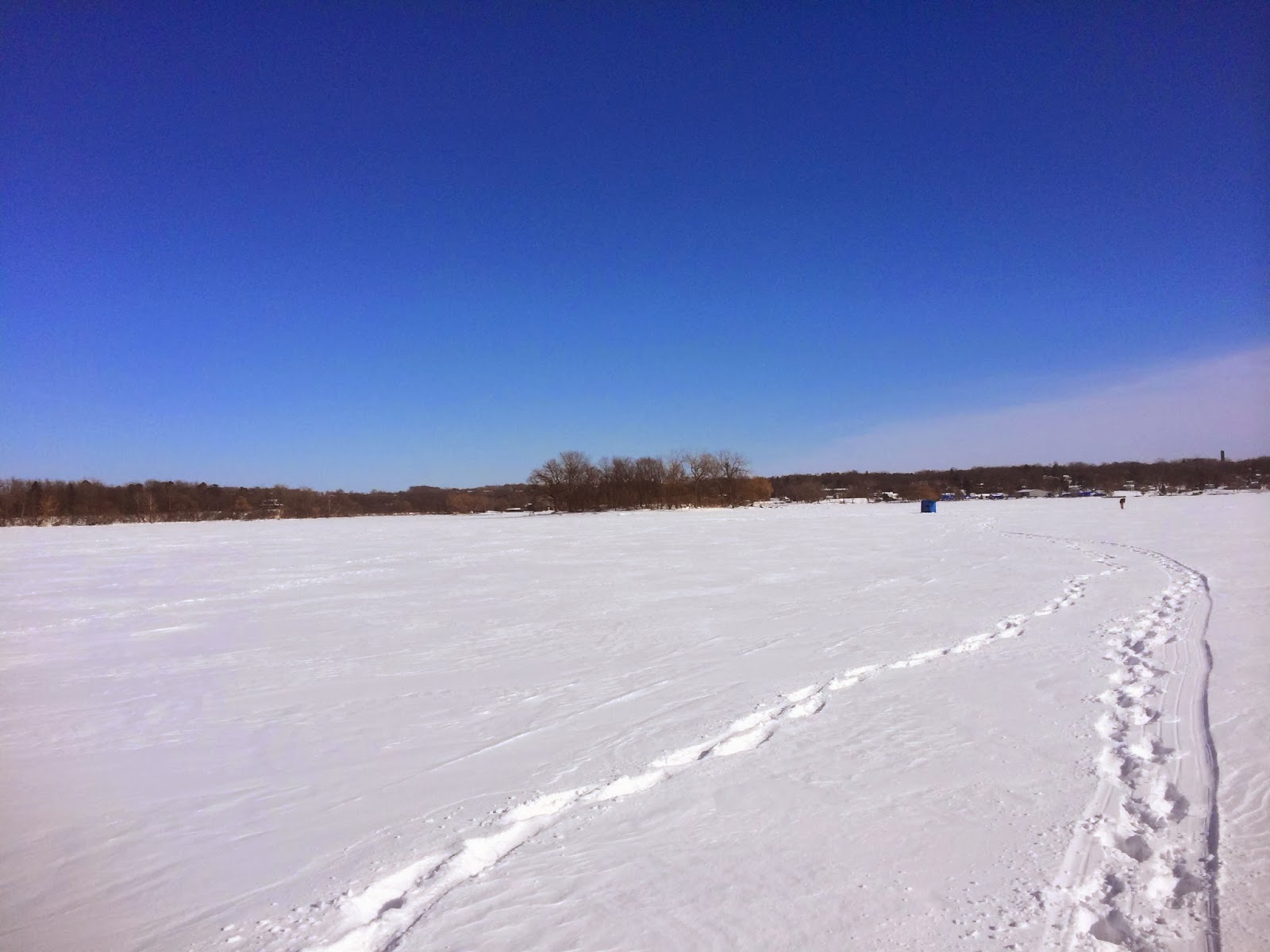 That tiny dot is the ice fishing shelter. This isn't the view from shore, though. The shore was even farther, and from it you almost couldn't see the shelter. It was a really long walk.

It was, unsurprisingly, cold and windy out there in the middle of the lake. Very wintery, very dramatic, and very cool to be right out in the middle of a frozen lake with nothing at all around. Cubby was absolutely in his element. He kept himself busy hand jigging in one of the holes, with breaks to use the little dipper thing to break the skimmed ice off the holes with the tip-up rods* in them. 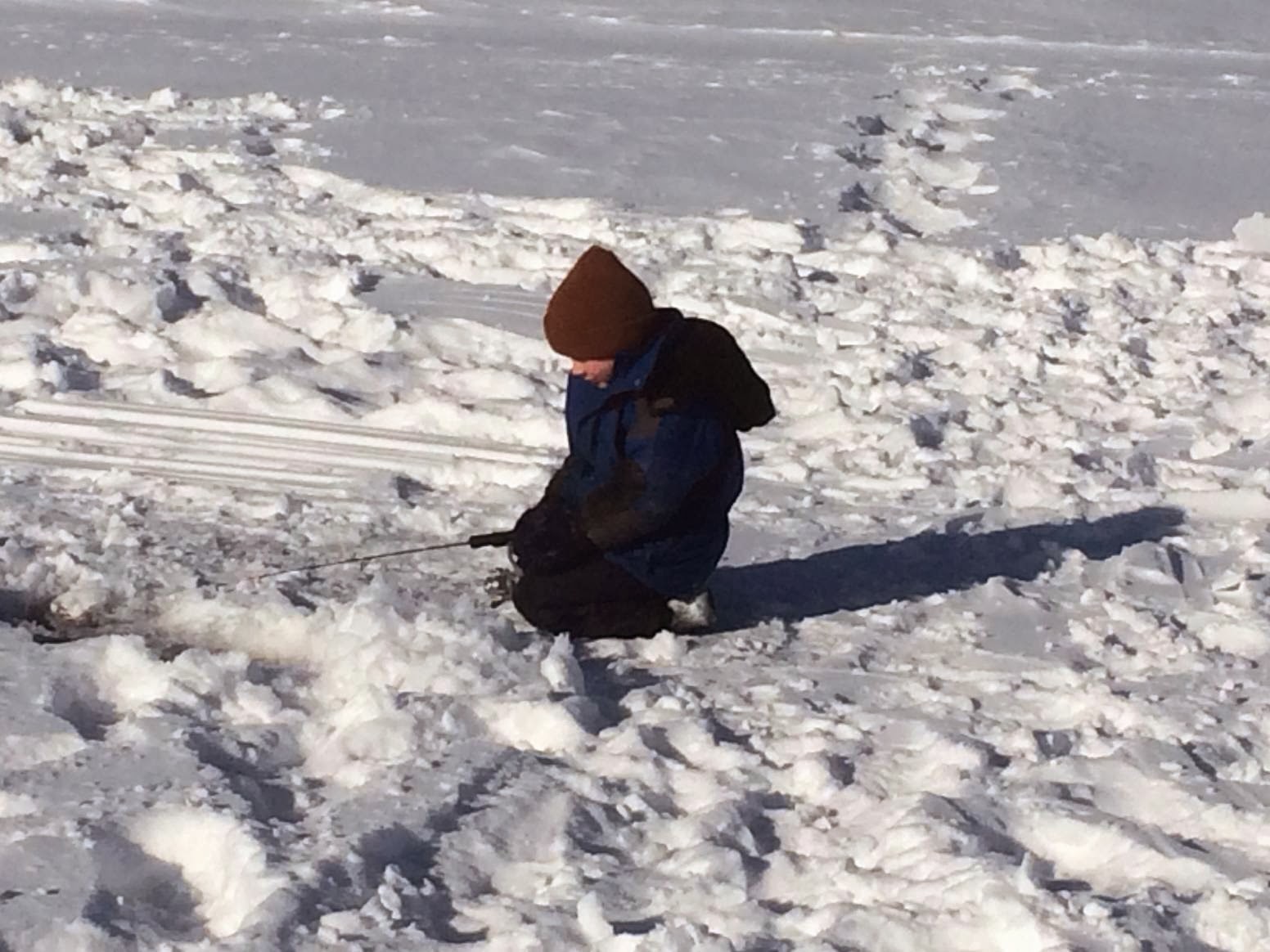 If this doesn't look like fun to you, then you should never visit us in the winter.

Charlie did okay, but had a shorter window of enjoyment for this particular activity. So after about an hour, I loaded him into the pack and trudged my weary way back to the cars. I had to stop a couple of times to rest, mostly thanks to the fact that I had started the final and most challenging level of the 30-day Shred that very morning and was already feeling, uh, shredded.

Anyway. I was very glad to get back to the car. Not so glad when I realized I was locked out of the car.

The key I had for A.'s car turned out to be only for the ignition. It didn't unlock the doors. Super.

Very luckily, A. hadn't locked the other car. I couldn't drive it home, because I didn't have the keys and was not about about to trek over a mile roundtrip to get them. But with the sun shining in, the car was pretty warm. So Charlie and I hung out there in the car for about an hour, by which point the sun was setting and the ice-fishing die-hards had packed it in for the day.

The total haul for the day was two nice-sized pickerel and a small perch. We ate them for dinner last night. I think A. and Cubby are going to go ice fishing again tomorrow.

Winter has its perks. Assuming you're hardy enough to take advantage of them.

* Mr. Jason had about a dozen of these tip-ups, which are like very short, unmanned fishing poles that, um, tip up when a fish is on.

Just Another Day of Romance at Blackrock

Happy Valentine's Day, my lovelies! Romance is in the air at Blackrock. We're going to have a very touching day of sledding and brotherly love (read: fighting). We'll cap it all off with a romantic dinner of a takeout fish fry courtesy of the fundraiser in the village.

French fries AND I don't have to cook? Beauty. I don't even have to change out of my slippers.

What are you doing today to celebrate love? Or do you ignore the whole thing?
Posted by Kristin @ Going Country at 6:24 AM 4 comments:

That would be Cubby. Today is his fourth birthday.

Cubby's teacher was kind enough to tell me about this ahead of time, so I won't be stammering and stuttering and then coming out with something lame like, "Uh . . . I think he learned to talk that year? Maybe?"

But what I thought was very illuminating were the things that first came to mind when I tried to recall landmarks for each year of Cubby's life.

First year: Baby Cubby was such an aggressive eater that he would lunge at me to get milk, so we nicknamed him the Cobra (I will probably not share this at preschool). Also in this year he learned to walk before he learned to crawl. He was eager to get going, I guess.

Second year: Cubby started going into the woods with his father, thanks to the pack. He also began to talk, and pretty much hasn't stopped since.

So essentially, Cubby's life thus far can be marked by his motivation for independence and outdoor accomplishments. That's about right. 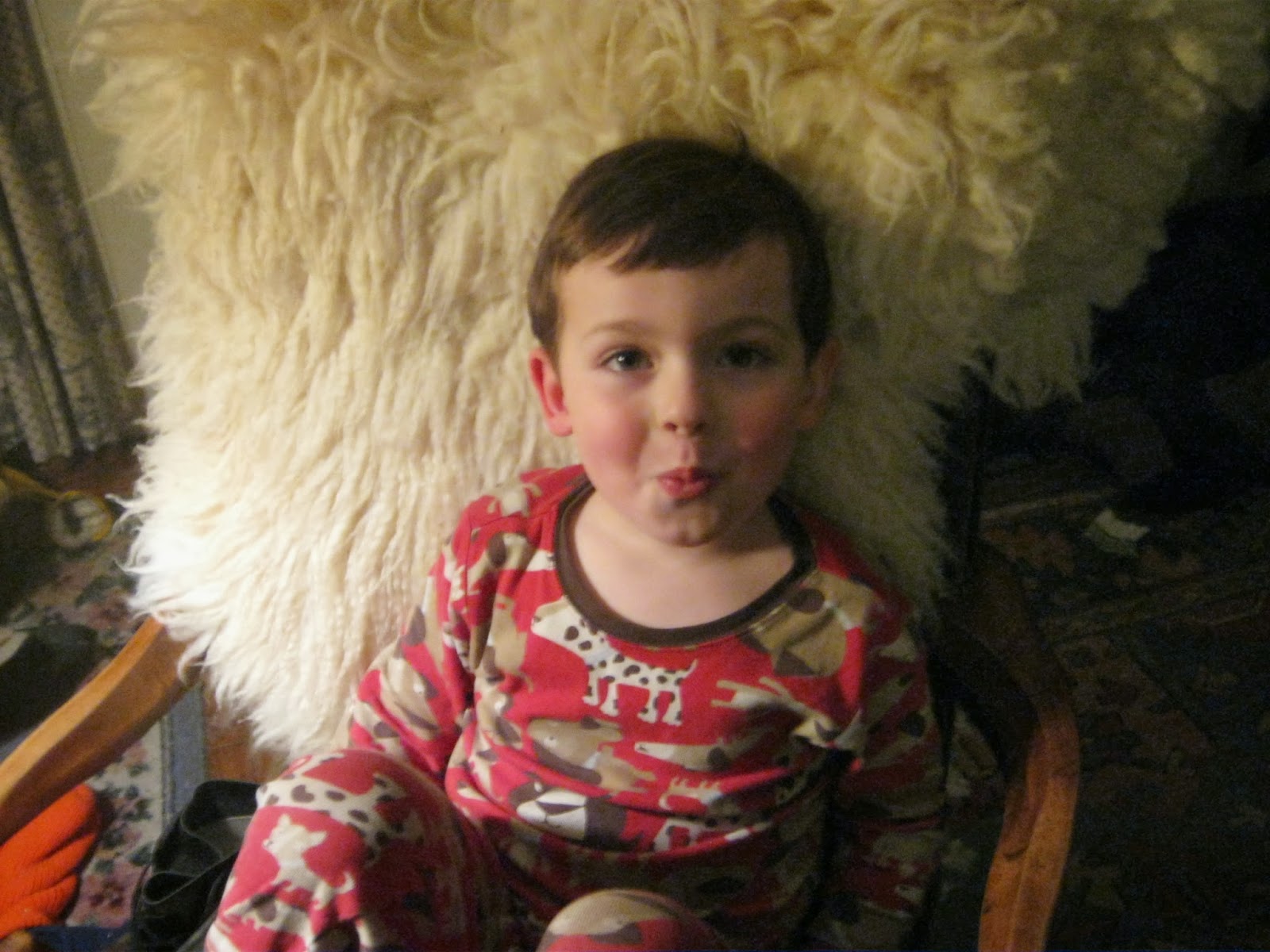 Happy birthday to Cubby the mountain man. We broke the mold with this one.
Posted by Kristin @ Going Country at 3:04 AM 5 comments:

Due to its size and depth--plus the never ending wind--our lake almost never freezes entirely in the winter. The last time it froze all the way across at our point of the lake (which is the widest point) was in 1979. But it got really, really close this weekend.

I would never be able to convey to you how excited A. was about this. SO EXCITED. He took multiple trips down to the beach to check on the conditions, and spent the rest of his time gazing out the front windows of the house at the lake.

And he took Charlie and Cubby down to see it. The MiL went too. I stayed in the house. Can you blame me? 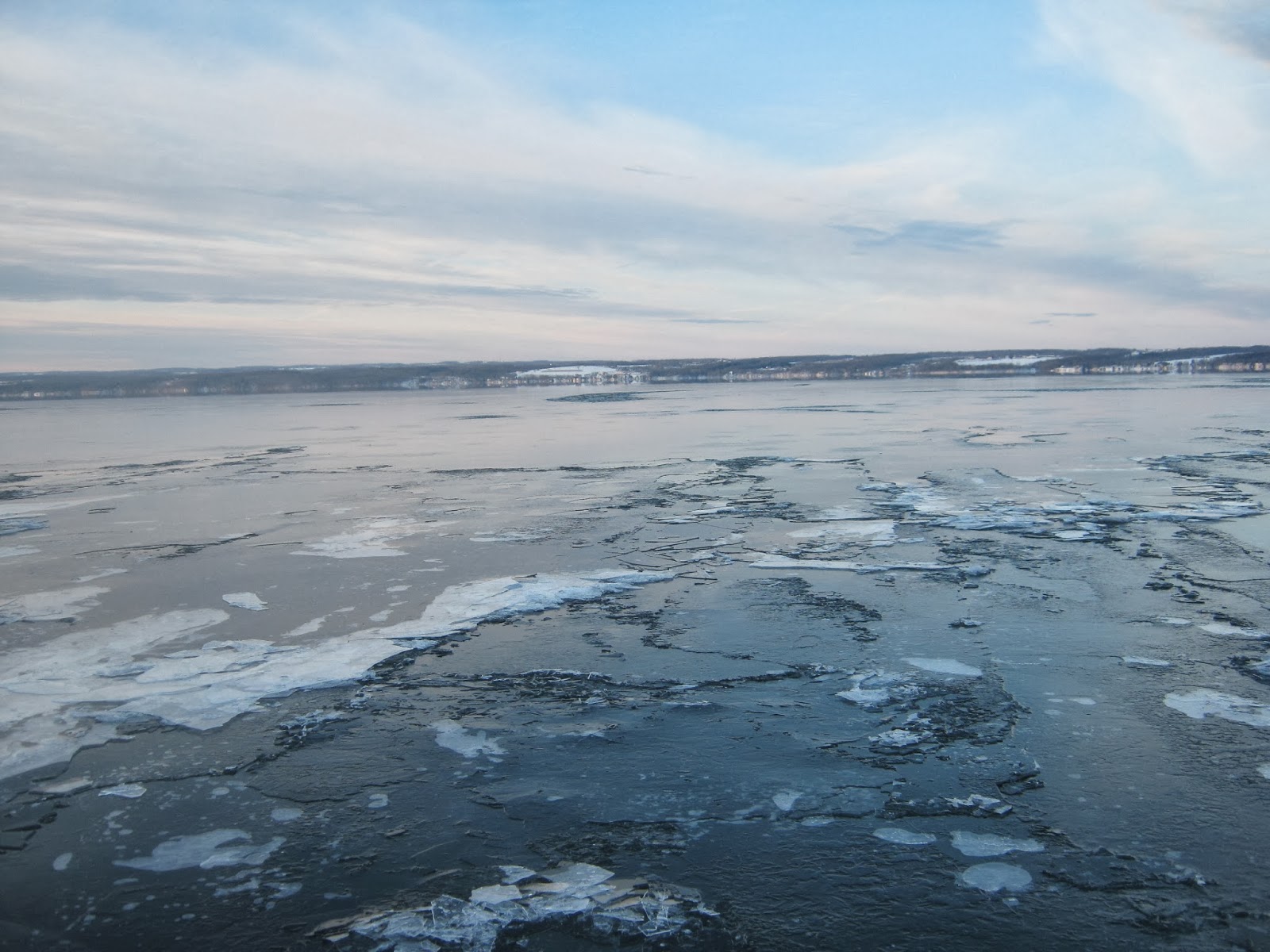 The children were thrilled with their ride down to the beach in A.'s utility sled (mostly used for pulling firewood and hay). 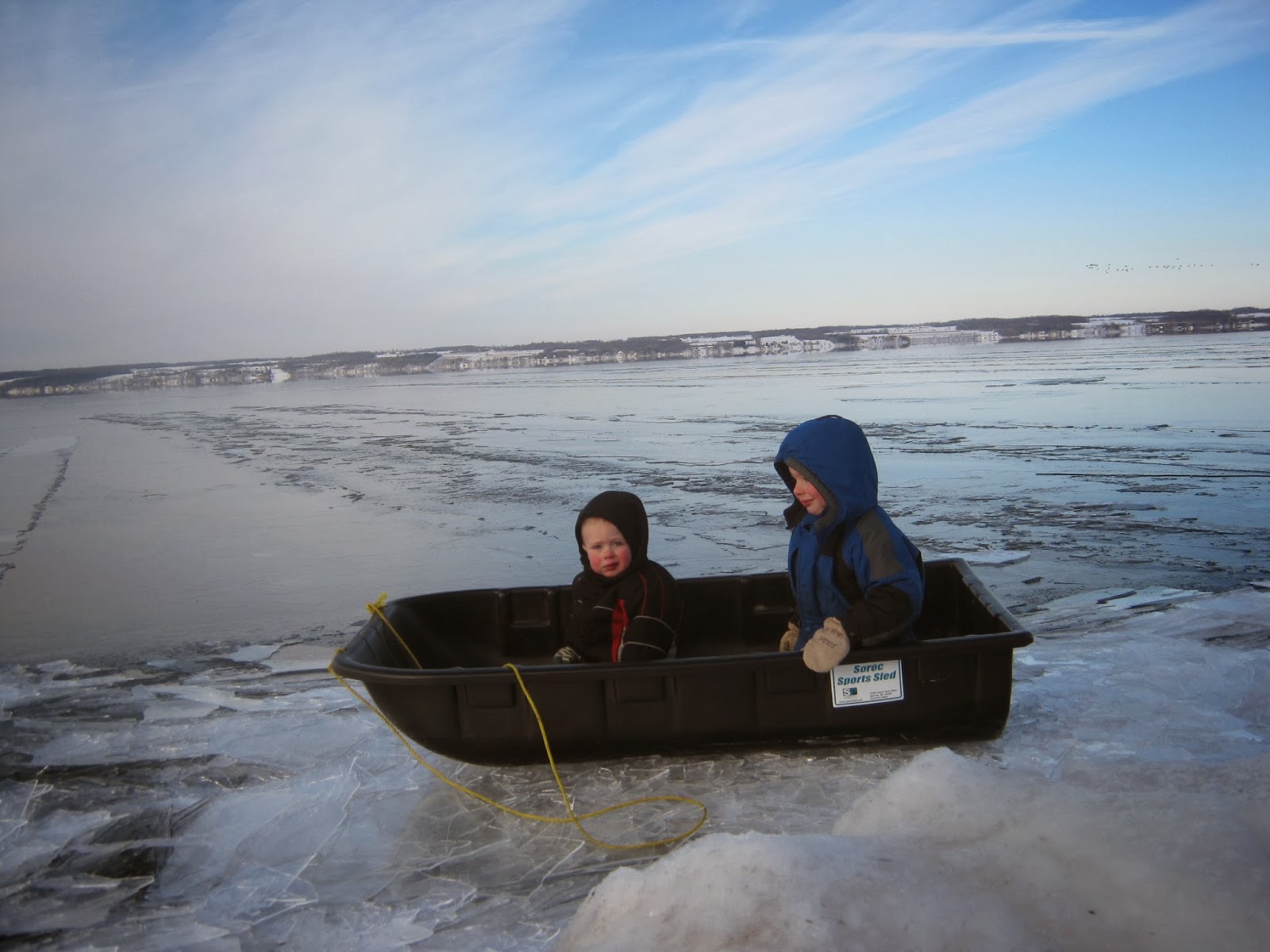 It also floats, I think, though that's not really something I would care to test in these conditions.

After this, A. tried to return straight to the house, but Cubby demanded that they all return via the gully. So A. hauled the sled and its contents up the frozen stream in the gully. And then up the gully bank. It was about five degrees below zero in the gully, and it didn't take long before Cubby was re-thinking his adventure. 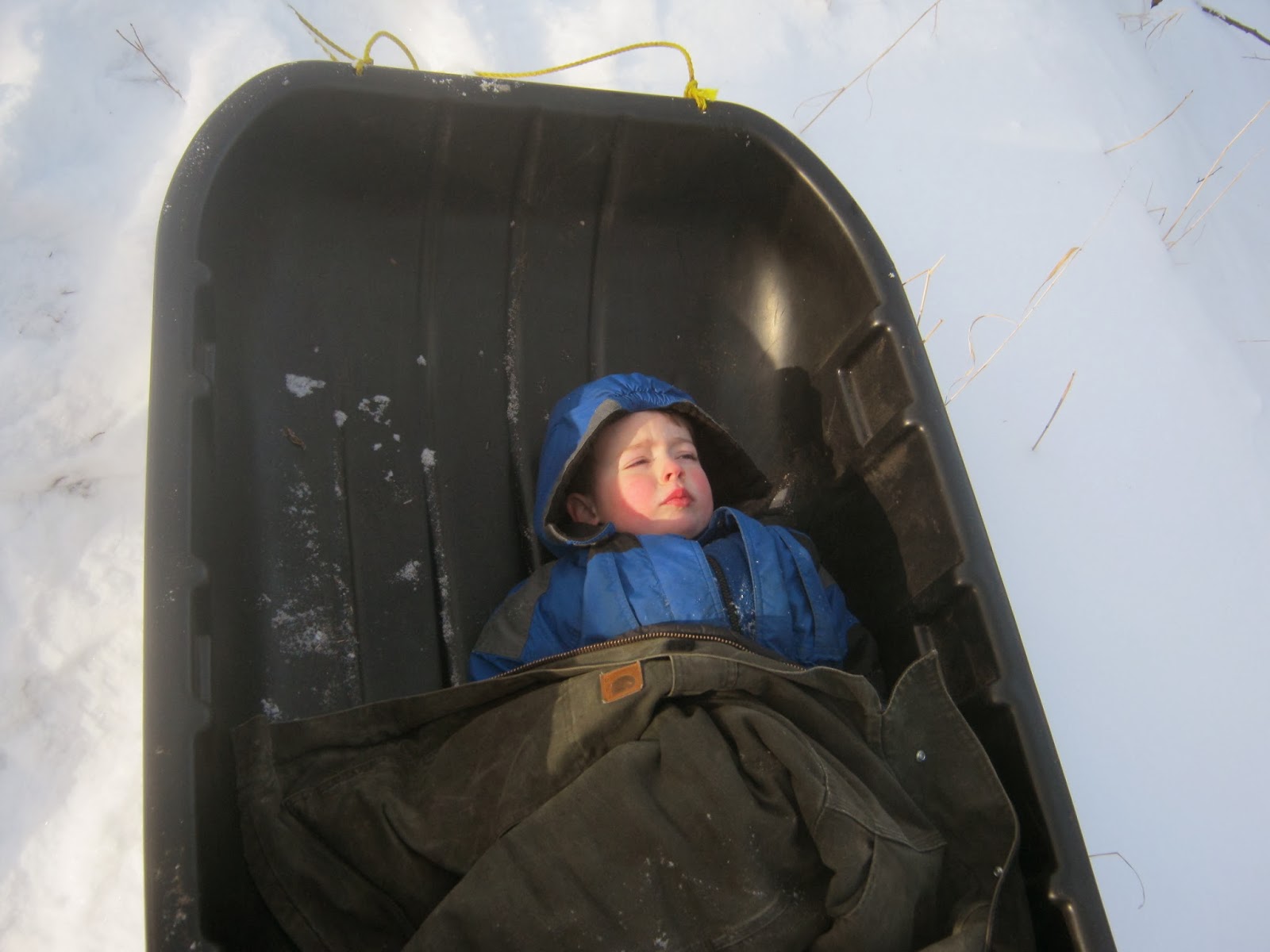 Do I see a tinge of regret on his frozen face?

By the time they made it back to the house, Charlie had joined Cubby there in the bottom of the sled under A.'s coat. It was not a happy sled any longer. Both children had to be hauled bodily into the house, where they both proceeded to lose their damn minds.

The adventure started out exciting, and they did enjoy themselves, despite the aftermath looking like this: 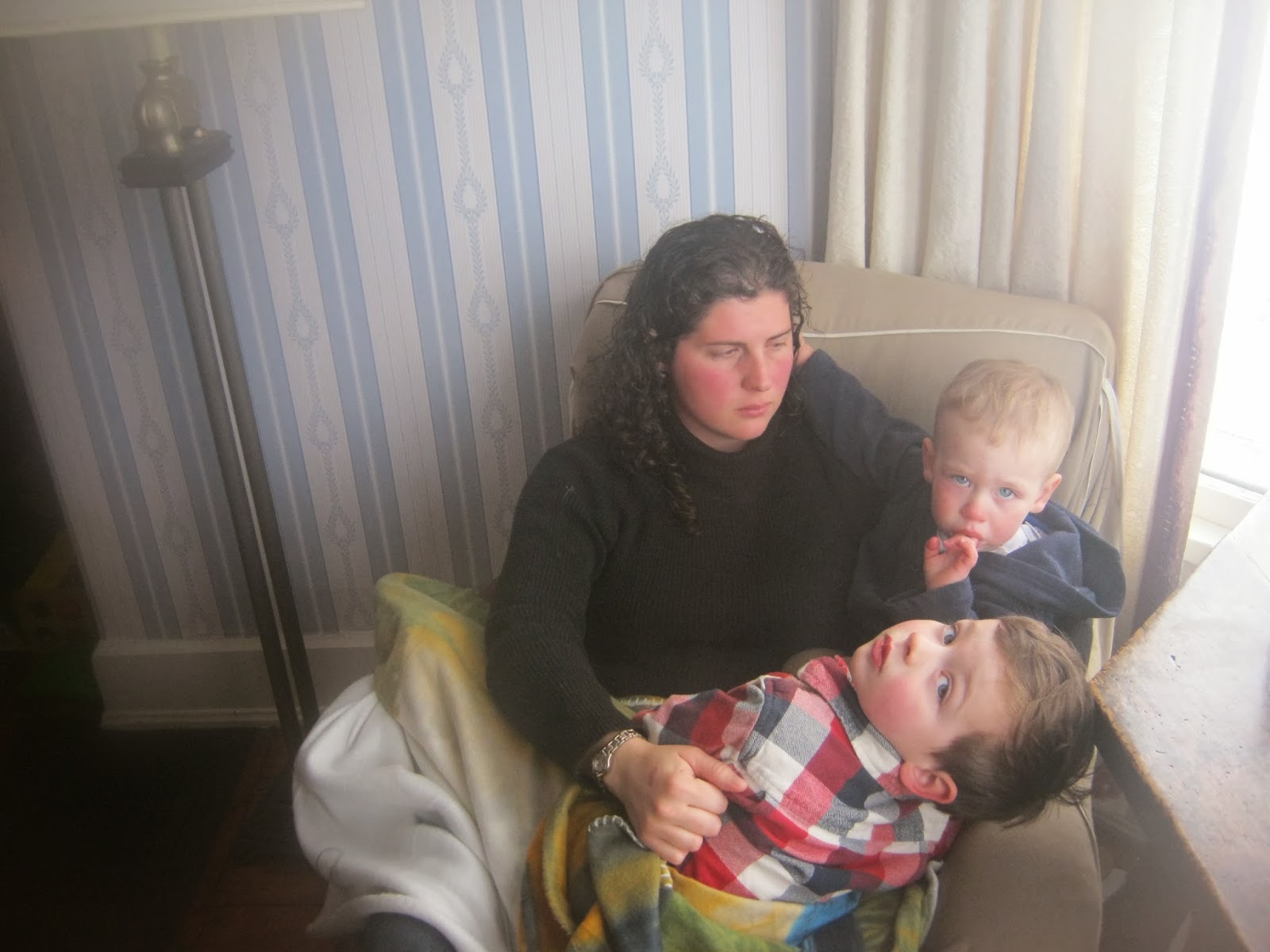 Accusing glares from the safety of Mommy's lap directed at the architect of their misery: Daddy.

Unfortunately, the ice broke up the next day and is currently nothing but fifty feet of slush extending from the frozen shoreline. I know this because I hauled those children down to the beach myself this morning in that very same sled so they could see. We stayed all of ten minutes, at which point I hauled them back up, because it was about ten degrees with a stiff wind down there.

We did not come home via the gully, because Mommy ain't no fool. Plus, it's hard enough pulling the sled loaded with a combined 70 pounds of boy from the beach straight to the house. I call it my Supplemental Shred.

Anyway, in summary:  It got cold. The lake almost froze (as did the children*, but never mind that) and A. was beside himself with joy.

Good things do happen in this world.

* Humorous hyperbole. My kids are unbelievably hardy. A lot more hardy than their mother, that's for sure.
Posted by Kristin @ Going Country at 9:56 AM 1 comment: