Long version: We had to take the puppies in to the larger town for a late-afternoon vet appointment for their shots. I wasn't sure if I would be able to find something at the grocery store to have a roadside picnic or if we would just go home.

We got home at 5:30 p.m. and everyone ate some version of the leftover elk chili, tortillas, and cheese. I had a salad with the very last avocado my sister brought with her and some hard salami I had gotten at the store.

You know you live a lot of miles from a store when salami is an occasional treat.

Long version: This was the night of the Halloween celebration in the village. The one restaurant has a baked potato bar buffet that's free for kids, which is pretty much the only way our family of six is going to be eating at a restaurant.

I skipped the potato and just had the pulled pork, chili beans, and Fritos with various toppings. The kids mostly skipped real food entirely and homed in on the completely laden dessert table.

Long version: "Good news!" I announced cheerily to A.-the-cauliflower-hater. "We're having curried cauliflower with dinner!" To which he replied, "Oh good. Cruciferous vegetables with curry powder are really what I've been missing now that we're so far from fresh produce."

So much sarcasm in that kitchen.

Cubby and I enjoyed our curried cauliflower, though. So did Poppy. Another for the curried cruciferous vegetable team.

Long version: Nothing to see here. Just another workday dinner in which everyone was fed in a very unfancy manner.

Long version: This elk is very good for stir-fry, being very lean. 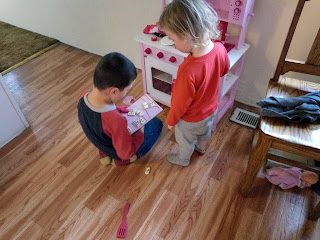 Long version: We started the day by losing power at 6 a.m. Charlie got up a short time later and immediately asked, "But how will I read my book? Oh, never mind. There's a candle." 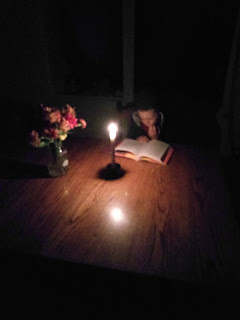 Abe Lincoln's got nothing on him*.

The roads were icy, it was snowing, and we were surrounded by ice fog, so school was canceled. Since it was a Wednesday, this meant that I didn't have to go to work. Hooray.

My very old propane stove actually has pilot lights, so I can cook even without electricity, but I wasn't looking forward to boiling water for dishes. So I was glad that the power was back on by noon.

A. packaged the elk meat by simply stuffing gallon-sized zip bags as full as they could get. This means that when I take a bag of elk out of the freezer, I'm dealing with a LOT of meat. So while I was trimming and cutting the elk for the stir-fry, I did some extra meat and put it in a marinade of olive oil, vinegar, garlic, salt, and dried basil and oregano for the next day.

A.'s favorite meat preparation is fried, then mixed with marinara sauce and covered with mozzarella cheese. So that's what I did with the marinated meat. Thus, pizza elk.

I used the rest of the marinara sauce in the pasta, along with some Romano cheese I used in place of our usual Parmesan. A. had purchased the Romano at the cheese factory some time ago, and I figured it was close enough to Parmesan.

Charlie did not agree. He started eating his pasta, made a face, and said, "This pasta tastes okay, but it smells."

So I guess I shouldn't try using Limburger next time, then.

Long version: We all went to Cubby and Charlie's school Halloween party in the afternoon, to kick off the sugar bingeing early. In between the party and trick-or-treating, I managed to get some real food into everyone.

After their brothers left to go trick-or-treating with A.--who was not looking forward to a two-hour trailer ride in the forty-degree weather--I let Charlie and Poppy have a candy picnic by the stove with the candy we had already accumulated. 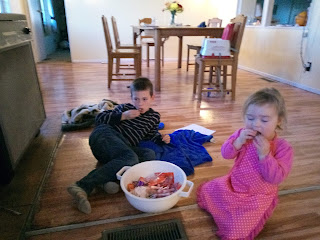 * For my sister: Please note the flowers you brought us are still going strong two weeks later. Probably because our house is usually so cold it's basically a refrigerator, but still. We're getting your money's worth out of those flowers.


You know how when you start to type in the Google search bar, it will auto-fill after the first word or so? I don't know what kind of algorithms they use for this to try to guess what you're looking for. Maybe it's just magic?

Anyway, somewhere online I saw something along the lines of, "Type in 'my children are' and let auto-fill tell you the truth you don't want to admit."

Or something like that. I can't remember the exact words, or where I saw it, but I did it.

Here, in order, is what auto-fill thought I was looking for:


Last night was the village Halloween celebration. Of course, we went, with the under-10 set in costume. 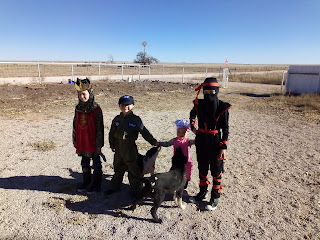 From left to right we have a very sulky Crusader king, a fighter pilot who needs a couple of years to fill out that flight suit, the world's most adorable chef, and a very fierce ninja in Converse. Plus a couple of puppies who are hopeful that the chef has some treats in that apron.

Part of the celebration is one of those trunk-or-treat deals where the kids go to (parked) cars and get candy. They also got candy at the haunted house. Between the four of them, they came home with this: 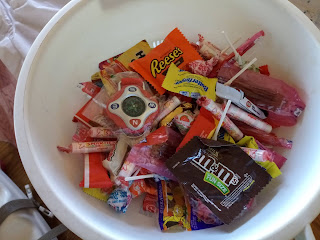 After the first day of treats, I always dump all the candy in that one huge colander. So that's the beginning of The Candy Bowl.

Later this week, there will be a Halloween party in Jack's classroom, as well as one for Cubby and Charlie. And then on Thursday is the actual trick-or-treating. Soon The Candy Bowl will be overflowing into a Candy Bag.

Given the rate at which I allow my children to eat candy, this means that it will sit around until about Christmas, at which point all the good candy (i.e., chocolate) will be gone, leaving only the unwanted DumDum lollipops and weird stuff like Atomic Fireballs, which I will throw out eventually. It's a tradition.

But for now, we have KitKats and Reese's Peanut Butter Cups in The Candy Bowl, with the promise of much more to come.