One thing about being married to a woodchuck man is that the term "DIY" takes on a meaning far beyond that of your average Home Depot project.

For instance, a couple of weeks ago A. and I were lamenting all the green tomatoes in our garden and how we just weren't going to get the warm weather to ripen them. "We need a greenhouse," said A.

So he built one. Starting with trees from the brush behind the house. 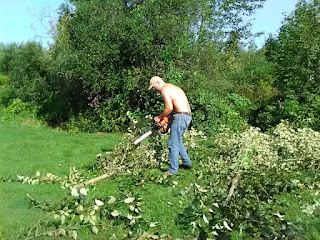 If your projects start with chainsawing trees down, you might be a woodchuck.

I used to be his unskilled--and frankly, kind of unwilling--helper with these projects. But I have now passed the torch. 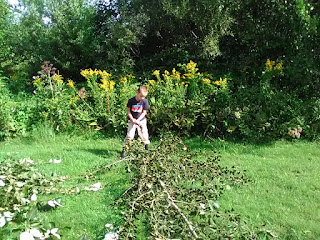 And the hatchet for trimming. 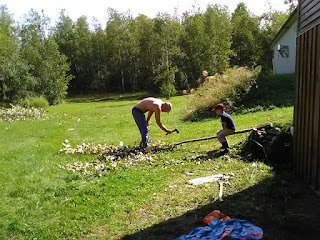 A.'s new helper is a lot more enthusiastic. As well as more skilled, to be honest.

After a lot of cutting, trimming, dragging, and wiring, there was a frame the likes of which I could have never imagined. 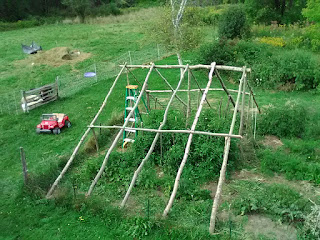 Maybe we'll just move in with the tomatoes this winter. The structure is certainly big enough.

The project had to be put on hold until the plastic for the covering could be procured at a store, but on Tuesday, the tomatoes were comfortably settled in their rustic greenhouse. 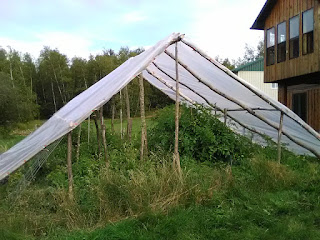 Sides coming soon to up the sauna atmosphere.

Just in time, too, as it was 38 degrees when I woke up this morning. Tomatoes do not enjoy 38 degrees.

You know what does enjoy 38 degrees, though? Hanging lamb carcasses. Specifically the one that's hanging under the porch right now.

After severe sticker shock at grocery store meat prices last week, and seeing a relatively cold forecast for the next few days, A. decided to butcher the first of the lambs. He killed it and dressed it out yesterday--with the enthusiastic assistance of all three children--and it's hanging under the porch until at least tomorrow, when he'll cut it up.

Lamb and tomatoes underway. Winter is coming, and we're getting ready, woodchuck-style.


"Hey, guys. I could use some help picking up all these branches from the lawn*. We can pile them up in the fire pit and have a bonfire later." 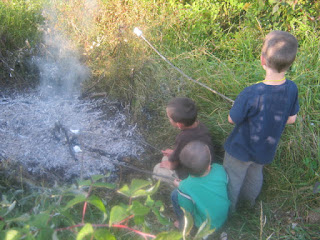 Mommy manipulation for the win.

* There were dozens and dozens of branches to be cleaned up, most from a very ambitious project that A. completed yesterday and that I will share later. It involves my tomatoes. Please contain your excitement.

It sure is lucky for my children that my idea of fun is picking feral* apples, making them into sauce, and then canning the sauce. If you're going to only have one hobby, I suppose it might as well be an edible one. 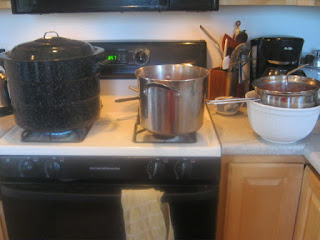 More beneficial to them than Sudoku.

Of course, those lucky children spent most of the time I was making and canning the applesauce fighting over blocks and action figures, resulting in many canning interruptions for Mom Refereeing.

Oh well. Anyone who expects gratitude from children is doomed to disappointment.

* As opposed to true wild apples, like crabapples. There are legions of feral apple trees around here that are descendants of unknown cultivars planted by settlers many years ago. Perfect for fall foraging and a winter's supply of applesauce.

Labels: all about me, brothers, country wisdom, domesticity, family, fun with food


This morning A. loaded up the Subaru with camping equipment and all three boys to climb a mountain over an hour away.

Jury's out on whether he's completely crazy or just Dad of the Year. Maybe both. Lucky boys.

I did not accompany them. I'm just not one of those Iron Women who run marathons or hike mountains or sleep in a tent at almost eight months pregnant.

I don't feel bad about that, either.

I was probably taking a nap in my nice soft bed about the time that A. took this picture. 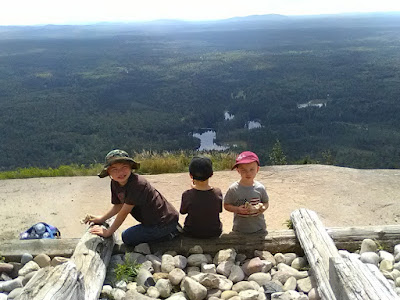 I can tell myself it was a well-deserved nap, though, because those peanut butter sandwiches they're eating? ALL ME.*

A. called a little while ago to inform me that they've got the tent set up in a state forest. I expect I'll see them early tomorrow morning, exhausted but exhilarated and ready for an extra-large breakfast. A. will almost assuredly be ready for lots of coffee, too. And he will have it. Because climbing a mountain AND camping overnight with three little boys deserves at least that much, right?

Right. Dad of the Year, for sure.

* Actually, doing all the food prep for camping is the best kind of food prep, because once it's done, they leave and I don't have to do ANYTHING ELSE for hours. Glory, glory, alleluia.