Friday Food: KAF Was My BFF This Week


That was a terrible title, but I do owe a debt of gratitude to King Arthur Flour and their excellent recipe site this week. I used three different recipes for things I've never made before, all three with KAF recipes, and all three worked perfectly. If you're not an experienced baker, you need a recipe source you can trust to get it right. King Arthur Flour is it.

Okay, end totally unpaid endorsement. On with the food!

Long version: We went on an expedition to the faraway bigger town this day, so I knew I wouldn't have much energy left for cooking when we got home. Thus, I cooked extra onion the day before and thawed ground beef so I could make very fast tacos. Good thing, as I was not only exhausted, but also not feeling very well by the time we got home at 3 p.m. After getting all the groceries put away, I collapsed into bed to rest. At 4:30, I heard a conversation in the kitchen about my whereabouts and condition, culminating in Cubby asking, "Wait. Did she make dinner yet?"

Nice to know I was missed.

I got up, browned the meat, added the onions, the remainder of a can of tomatoes plus some salsa, microwaved some tortillas and cheese, heated up the beans, cut up cucumbers, and called it a dinner.

Long version: I was still not feeling particularly well, so I suggested to A. that maybe he could prepare the two rabbits he had caught in his snares the day before. He rose to the challenge with an Italian dish that called for cooking the rabbit pieces in a red wine sauce. The sauce involved an entire bottle of wine and fourteen cloves of garlic.

There's food to put hair on your chest.

He also put in some pork chops, just to make sure there was enough meat.

I made the rice and green beans in an attempt to create a balanced meal. A. doesn't worry about such trivialities.

This is what the children did during dinner preparations: 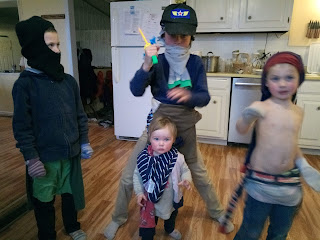 Long version: Good thing I had planned on leftovers, as Rafael called at 3 p.m. to see if A. wanted to go to his ranch in the canyon and A. ended up taking all three boys and not returning until a little after  6 p.m. Everyone ate some combination of leftover tacos, rabbit, rice, and tomatoes.

Long version: Cubby's birthday meal should always include seafood. He LOVES seafood, but it's not something that's readily available in any quality near us. However, A. went to Santa Fe unexpectedly on Monday, so he picked up some Texas Gulf shrimp. I just boiled them and then added melted butter and garlic.

I made the mini hamburgers for the half of the family--me, Charlie, and Jack--that doesn't like shrimp. And I made hamburgers because I was too lazy to make meatballs. I seasoned them like meatballs, but no bread crumbs, and then just fried them as very small patties. Honestly, they were almost as good as meatballs and a hell of a lot easier.

I used the remainder of A.'s wine sauce in the tomato sauce. That was a good call.

Cubby requested a chocolate cheesecake this year. I'd never made one, so I used this recipe from King Arthur Flour, but I had to adjust it for my 8-inch springform pan.

A. was in the kitchen while I was making it, and when I told him I was reducing all the ingredients by 25%, he made a face and wished me luck. His faith in my math skills is sorely lacking.

I did all the math right (HA HA, A.) and it came out fine, but I was somewhat shocked to learn that I don't really love chocolate cheesecake. I love cheesecake, and I love chocolate, but not together. Something about the tang of the cream cheese just doesn't seem right with chocolate.

But of course, it wasn't about me, and Cubby did love his chocolate cheesecake. Even if it did crack so severely that my carefully placed "decoration" was sliding into the abyss. 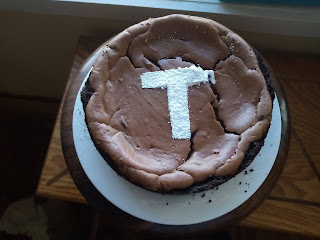 Another birthday, another Ugly Cake. It's a tradition.

But hey! At least I managed to find the actual birthday candles this time! And everyone else liked it. 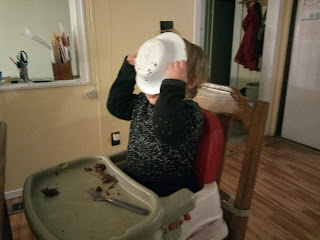 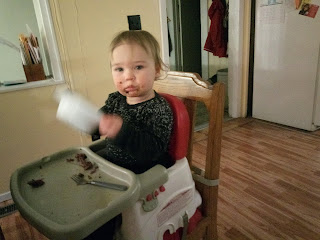 Long version: I spent much of the day making (and cursing) the sugar cookies I stupidly decided to make for Jack's class Valentine's Day party. I used the last of my cocoa powder to make the brownies for Cubby's school birthday treat on Monday, so I couldn't make brownies again. I've never made cut-out sugar cookies before, but it seemed a very traditional thing to do for Valentine's Day. 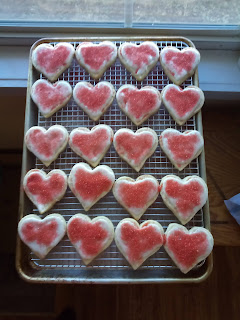 Only twelve of the fifty or so I rolled, cut out, baked, and decorated. Boo.

I was not pleased to be faced with more food preparation at dinnertime. That's why I sprinkled seasoning on three random pork chops that needed to be cooked, plus a pound of meat shaped into hamburgers, and slapped both forms of meat on my grill pan. To that I added a sliced onion. When all of that was done, I put on pieces of buttered bread to fry until toasty.

I had made the ranch dressing the day before, thinking I would serve salad for Cubby's birthday dinner, but I ran out of motivation to wash and spin lettuce, so we had it this night instead.

Long version: This was the day of Jack's class party. I had made so many sugar cookies that I decided to use those to go with the boys' valentines for their classmates. So for Jack's party treat, I made Rice Krispie Treats*. 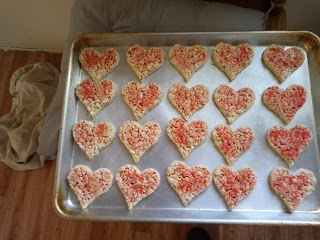 Now I'm going to force you to admire the sum total of my labor of love (geddit?). 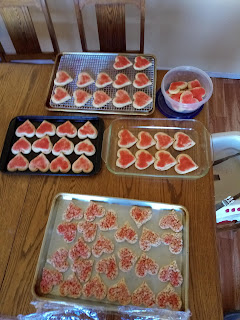 I made A. admire this too, because God knows, no one else will. They'll just eat it.

And also help Charlie cut out the letters for the poster to go on his last-minute mini-float while Jack tried to steal more of the candy he got at his class party and Poppy cried because I wouldn't let her have one of the cookies I was putting in sandwich bags for Charlie's and Cubby's classmates.

It was a little hectic. Or should I say spirited? Ha ha.

Long version: Jack, Poppy, and I were due at Cubby and Charlie's class party at 2 p.m. I had said I would bring biscuits, in an attempt to provide something with slightly more substance than cupcakes and cookies, of which there were many. I decided to make cheddar biscuits, which I did by just making a double batch of the baking powder biscuit recipe I have memorized from my New Better Homes and Gardens Cookbook and adding garlic powder and lots of cheddar grated medium-fine.

Incidentally, my mom gave me that cookbook when I moved into my first apartment, I do believe. Let's not talk about the fact that my "new" edition is from 1996 and is thus over twenty years old. Yikes.

I like that recipe (2 cups flour, 1 tablespoon baking powder, 1/2 teaspoon salt, 1/3 cup butter, 3/4 cup milk), but for cheese biscuits, I think one with more butter would have been better. I was going for a biscuit that could be eaten plain without feeling as if it needed more butter spread on it, but I thought they were a bit too dry for that. I brought some butter with me, but then someone else brought queso (melted cheese with jalapenos in it) for chips and I saw more than one person putting the queso on the biscuits, so it all worked out in the end.

I made almost three dozen biscuits and they were all eaten. There were only about fifteen people in attendance, so that means they were a hit. 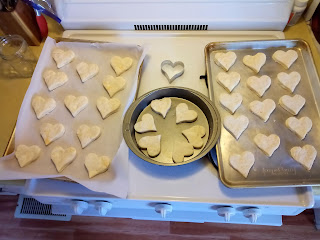 I should've gotten a picture of them after baking instead of before, because they rose so high they were falling over. But it was a little nuts trying to pack these all up and get the two little ones out the door, so here they are before going in the oven. That heart-shaped cutter sure got a workout this week.

After the class party, we stayed for the homecoming pep rally--which is something to see with an entire student body of thirty kids--and then the basketball game at 5 p.m. A. met us at the school around 4:30 p.m. and everyone ate a hamburger from the concession stand for dinner. Except Jack. He got a hot dog, but didn't eat it. Too full of biscuits and cookies, I guess.

* If you followed all of this: Yes, I did indeed go from planning to make brownies for Jack's party, to making and planning to bring sugar cookies, to actually making and bringing Rice Krispie Treats. It's been that kind of week.

I Got Spirit, Yes I Do


Okay, that's actually a complete lie. I have no spirit. Never have. I dislike dressing up, cheering at sports events, and coming up with cute ideas for theme days.

Unfortunately, I have to do all of that this week on the boys' behalf.

See, this week, in addition to being the week of Cubby's birthday and Valentine's Day, is also Spirit Week at their school, culminating in the homecoming basketball game tomorrow. So every day has a theme.

Monday was pajama day. Easy enough, although Charlie, being Charlie, elected not to participate.

Tuesday was dress as something that starts with the first letter of your name, or wear the first letter of your name and make words with your friends. Ooookay. Charlie came up with his own idea for this, which didn't make a lot of sense, but since he was willing to do it all himself, I let it ride. Cubby thought of something about ten minutes before the bus came, but it was too late and he ended up just taping his letter to his shirt.

Today is dress as what they want to be when they grow up. Super. As A. remarked, it's like having Halloween twice. And we all know I suck at Halloween.

However. I resolved to at least try.

Jack said he wants to be a construction worker.

Cubby said he wants to be a bush pilot.

Charlie said he wants to be a wild man (a survivalist without a job, that is)*.

So, with the aid of duct tape, construction paper, and various pieces of furs and random items, we have  . . . 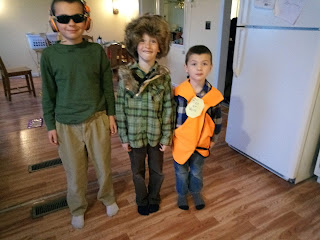 I surpassed myself. Although surpassing myself is a pretty low bar.

Tomorrow they're supposed to dress as their school mascot or in team colors, which is fine, but they're also supposed to have mini-floats (made with, like, little wagons or strollers or whatever) for a halftime parade at the basketball game. Cubby made his at school with a classmate. Charlie told me, again, he didn't want to participate. Until this morning, when he decided he did.

So this afternoon, I will summon my fake spirit once again and help him make a float with Poppy's stroller and a "game board theme." Wish me luck.

* I resisted the urge to tell Charlie he doesn't need a costume for that as that's his natural state. 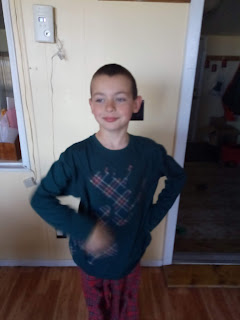 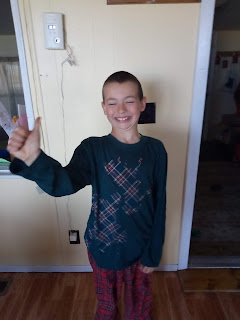 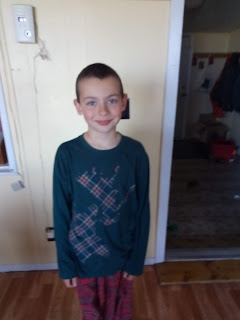 Happy birthday to Cubby.
More Man than Cub every year.