I will preface this story by informing you that though I was raised Catholic and was very active in the Catholic church through college, I am not now. At best, I could be considered a dispassionate agnostic. The MiL sometimes takes Cubby and Charlie to her Presbyterian church, but that's the extent of their religious exposure.

Which is why the following conversation was a little surprising. It started when I wouldn't let Cubby put the couch pillows on the filthy floor to "camp" inside.

Cubby (in a very petulant tone): Daddy lets me.

Me: Jesus Christ has nothing to do with pillows.

Cubby: He has to do with everything. He made the world.

Me: Right. And He gave us free will to make choices, and I choose not to put the couch cushions on the floor.

Cubby: But He forgives us if we do something wrong.

Me: Yes. But it's best not to do anything wrong that requires forgiveness. So don't put the couch cushions on the floor.

And then he flounced off.

Jesus and I both love him, but I make the rules. So there.
Posted by Kristin @ Going Country at 11:25 AM 4 comments:

Labels: all about me, country wisdom, Cubby

If You're Eating, Stop Reading Now

I know it's never going to be anything good when I catch The Smell. That particular Smell with a capital "S" that means one thing: a decomposing animal.

This time The Smell was located within smelling distance of the dining room door. I caught the scent a few times while I was going in and out, yet I found myself not-so-strangely reluctant to seek out its source. But knowing that nothing good ever comes of ignoring The Smell, I went on a search and destroy mission.

About ten feet from the door, behind the magnolia tree, I found it. It was the remains of some kind of rodent, a rat or a chipmunk maybe. So little remained of it that it was hard to tell its original shape, thanks to the fact that it was literally writhing with hundreds of maggots.

Oh yes. It was just as vomit-inducing as it sounds.

Charlie heard my exclamation of disgust and came over to investigate. I instructed him not to touch it and grabbed a handy shovel to scoop the whole mess up.

It broke in half.

I KNOW. Just when I thought it couldn't get any more foul, I end up with half a maggoty corpse on a shovel and the other half splatted on the ground with maggots wiggling away all over the place.

Do you want to throw up yet just reading about it? Yeah, me too.

I asked Charlie to grab a stick for me to push the rest of the filth onto the shovel, which he obligingly did. Then I asked him to take a nearby watering can, fill it with water, and wash all the maggots off the stone while I went to the gully to dispose of the horror on the shovel.

He got most of them washed away. I completed the flooding with a large bucket of water and then decided to share the whole happy episode with you.

Hey, at least I didn't take a picture. You're welcome.

Edited to add: Oh, BUT WAIT! There's more! About twenty minutes later, I was up on the front porch with Jack when Cubby wandered down to the front lawn by Otty and said, "Yuck. There's some gross meat here that Otty brought." It was a big piece of a deer lung or something. God knows where she found it. It was already covered in flies and starting to get The Smell. Back for the shovel and a stick for scooping, then flinging.

What a beautiful day this is turning out to be.
Posted by Kristin @ Going Country at 11:57 AM 4 comments:

Labels: all about me, Charlie, country livin', wildlife

The Disappointment Was Keen

Maybe I shouldn't admit this, but the thought of s'mores pretty much got me through yesterday. I helped coach Cubby's soccer practice. I shuttled children back and forth from the beach. I spent more time than I would have chosen on the blazing hot beach holding Jack and jumping him around and dangling his feet in the water.

It was really hot, and I felt like I was sweating from the time I woke up to the time I went to bed.

But! I was going to have s'mores after dinner! Anything can be endured with the promise of s'mores.

At 5:30 p.m., I gathered together all the supplies for our hot dog and s'mores cookout and we hauled everyone back down to the beach. Cubby and Charlie found sticks to carve with their knives to make the perfect marshmallow roasting implements. I bounced Jack around and found some smooth sticks for him to chew on. A. got the fire to the right state of embers for cooking. I held Jack up by the hands so he could practice standing. A. put the hot dogs on the cooking grate. I picked Jack up and walked around with him as he got increasingly irritable. S'mores were just around the corner . . .

And then Jack was done. Too fussy and tired to hang out on the beach anymore.

So I brought him up to the house to put him to bed, leaving A. in charge of the cookout. Jack went to sleep.

When it was clear he was not going back to sleep anytime soon, I figured I might as well just bring him back to the beach. At least that way he'd have something to distract him from his unhappy, non-sleeping state and, most importantly, I could have my s'more.

But when I got down to the beach, I found that Cubby had eaten the entire chocolate bar. And there is no such thing as a s'more without the chocolate.

I was way more disappointed about this than I should have been. As evidenced by the fact that I just wrote a whole post about it.

Edited to add: 10:45 this morning. Cubby and Charlie with A. on the beach. Jack asleep. I did this: 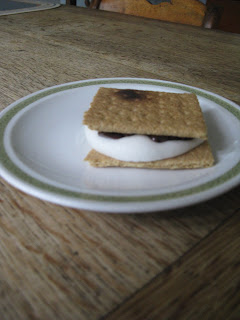 A microwave s'more. Not the same as real campfire s'mores, but I felt a certain vindication nonetheless.
Posted by Kristin @ Going Country at 5:46 AM 4 comments:

Labels: all about me, fun with food, Jack, the A team
Newer Posts Older Posts Home
Subscribe to: Posts (Atom)