Yesterday I had to take Cubby to the hospital to have his blood drawn for a routine lead test*.  I was not looking forward to this, as I am not so pleased to have someone shove a needle into my vein myself, and I could think of no good way to explain to Cubby why this had to be done to him.

After a quick analysis of Cubby's arm ("Great veins!"), the tech called in another lady to hold him while he sat on my lap.  The fact that they expected to need two adults to control one child made me even less comfortable with it.  The needle went in and Cubby gasped and then announced, "Hurt!"  At which point I started talking about how he would get to have a bandage like the goat that hits his hoof with a hammer (it's in a ridiculous children's book--don't ask).  And he didn't cry.  At all.  Not one tear, not a whimper, nothing after that first bewildered, "Hurt!"

The tech apparently had the wrong-colored tube for the lead test blood, or something, and had to switch out the tubes and thereby draw twice as much blood as necessary.  Irritating.  But even with the extended session with a big-ass needle stuck in his vein, he didn't protest at all.  When the tech handed him some Winnie the Pooh stickers after the bloody bit was over, he smiled at her.  When the other tech gave him a stuffed duck for being so brave, he said thank you (after a prompt from me, I must admit).  After some more remarks on his pretty lips and adorable face and incredible stoicism, we left the newest members of Cubby's fan club and came home.

This happens everywhere, with everyone he meets.  He is such a remarkably, unbelievably good child.  I mean, sure, we have unhappy moments and tantrums and inconsolable spates of tears, but they are few, short in duration, and confined to home.

I don't know what I did to deserve this child, but I am so, so grateful to have him.  And already bracing myself for the fact that I will pay for this good fortune with my next child, who will undoubtedly be hell on wheels.  Oh well.  At least Cubby broke me into motherhood gently.

* As a meaningless but nonetheless entertaining aside, talking of lead always reminds me of this scene in the movie Tommy Boy.  Please excuse the terrible video of some dude's television, but it's the only one I could find.
Posted by Kristin @ Going Country at 3:41 AM 7 comments:

A Day to Remember

We had a big day yesterday.  It started with A. going outside at 5:30 a.m. to fire up the evaporator in preparation for more sugarin'.

Well, actually, it technically started with me getting up at 4:45 a.m. so I could take a shower, but that's not at all memorable, so let's move on.

Jason arrived at 6:45 a.m. and Cubby demanded to go outside.  Cubby is a big fan of Jason's.  What's not to like?  The man drives a truck, provides us with fish, and is associated with maple syrup.  These are all positives in Cubby's book.


So we went outside to pay homage to Jason.  A couple of hours later, the MiL came outside to tell us that my sister-in-law was at the hospital, in labor and working to deliver Cubby's brand-new girl cousin unto us.  YAY!  Oh, and also the tree guy called and he was coming to take down the enormous and worryingly hollow ash tree looming over some power lines near the garden.

Ten minutes later, Tree Guy arrives with his enormous truck and proceeds to hop in the man lift, fire up a chainsaw, and start cutting branches way high up in the air.  Cubby was transfixed.  Of course.

Just when Cubby was sure the day couldn't get any better, a huge diesel truck pulling a trailer loaded with a real tractor came up the driveway.  And the tractor had a wood chipper on the back of it.

I thought Cubby was going to pass out from joy.  Instead, he purposefully approached the tractor, inquiring "Drive?  Cubby*?" This should not surprise anyone, given his history. When informed that he would not be operating that particular piece of heavy machinery, he then switched to "Drive?  Man?"  He repeated this approximately every five minutes until one of the men did actually drive the tractor into position.  Then they drove the diesel truck behind it and started chipping the branches. 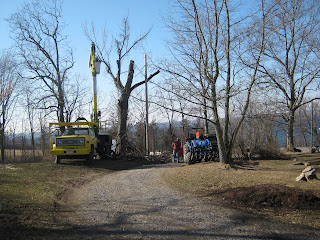 You are looking at my son's idea of heaven.  God help me.

The tree guys finished around 11:30 a.m., just in time to bring Cubby inside for his nap at noon.  What with all the activity of the morning, he was naturally exhausted and slept for three hours.  That afternoon, he spoke what is really, truly, and technically his first grammatically correct sentence with no pauses.  He was busily hammering at a chunk of wood near the evaporator and talking to himself when, clear as day, I heard him say, "Good job, Cubby**!"

Okay.  Self-congratulations.  Better than orders to his mother, I guess.

At 4:45 p.m., the MiL called to let us know that Cubby's cousin had arrived safely and all concerned were doing well.

At 5:45 p.m., I called a halt to the sugarin' so the sugarers--and Cubby--could come inside and eat dinner.

At 8:30 p.m., a large pot containing nine quarts of maple syrup was borne into the kitchen to be strained and put into jars.

At 9 p.m., I finished washing all the pots and other accouterments of sugarin'.

It was a long day, but a productive and exciting one.  Sugarin', tree removal, first sentences, and a brand-new baby.  Not bad for a random Wednesday in February.

* He did not technically say this, as he doesn't actually refer to himself as Cubby.  But we must keep the mystery alive, mustn't we?

And Now for the Season of Repentance

That would be Lent.  Not that I observe Lent in any way anymore, but I do usually celebrate Fat Tuesday in some way, even if only by cooking grillades and grits.

Except yesterday was Fat Tuesday, and nary a grit graced our lips.  We did eat some cornmeal mush, which is kind of similar, but is without doubt exceptionally northern.

I just . . . forgot.  I almost bought a King Cake at the grocery store on Sunday, but it said right on the box, "CONTAINS NO FIGURINE."  What's the point of a King Cake without the baby Jesus as choking hazard lurking inside?  Besides, buying a King Cake from an upstate New York grocery store just feels very wrong.

Anyway, it's sort of hard to get into the Bacchanalian spirit when it's 35 degrees and spitting down sleet.  That sort of atmosphere does not encourage the revelry that leads to flashing for beads.  Too cold.

So we missed our chance for our great Mardi Gras celebration.  Oh well.  At least I still manage to keep New Year's in the appropriate way.  Sort of.
Posted by Kristin @ Going Country at 3:18 AM 3 comments:

A. caught Cubby's cold with a vengeance and spent a miserable night on Sunday night trying and failing to sleep.  Which means that I also did not sleep.  He eventually gave up and went downstairs at 3 a.m. to prop himself up in the recliner to drain his head and watch terrible movies.

I slept until 5:15 when Cubby woke up, and I feel pretty good this morning despite the early wake-up call.

So the lesson to be learned here: The secret to feeling well-rested is going to bed 45 minutes after my two-year-old.  Swell.

P.S.  I found my shoes.  And an honest-to-God suit for Cubby, with a vest and everything.  Perhaps I will favor you with photos of these items tomorrow.  Try to contain your excitement until then.

Labels: all about me, country wisdom, Cubby, the A team 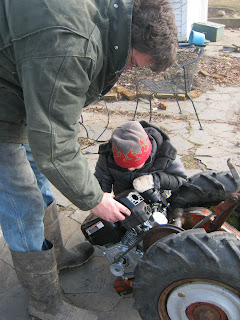 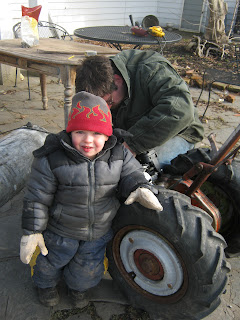 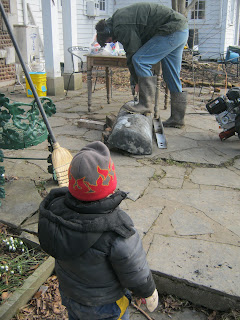 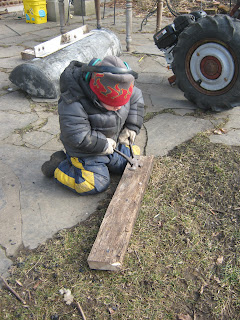 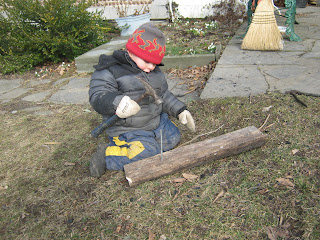 In case you were wondering what all the construction is about, A. was re-mounting his woodchuck plow with a sturdier metal mount to replace the original wood mount.  This required drills and angle grinders and all kinds of fun hand tools that Cubby could run off with at will.   A good time was had by all.
Posted by Kristin @ Going Country at 3:45 AM 3 comments:

Nothing To Do with the Country

Let's have an entirely non-rural talk today, shall we?  Yes.

Tonight A. and I are abandoning our (not very) sickly child to the care of his grandmother so that we can drive all the way to the Not Quite As Small City for a belated Valentine's dinner.  We're driving all that way because I have decreed that I want Thai food.  Basically, I want to go somewhere that does not offer burgers on the menu.  Such exotic fare is not available any closer than almost an hour from our house, so we will drive, because dammit, I want curry.

Sometimes, you just have to assert yourself.

Sometime this week, I will once again abandon my hopefully-no-longer-sickly child to go shoe shopping.  The big trip to Arizona for my sister's wedding is approaching rapidly.  I have a dress for the wedding*, but I do not have shoes for the dress.  I suppose it would be possible to shop for shoes while attempting to contain my rambunctious and sometimes-destructive toddler, but I would really, really rather not.  So I'll leave the Great Destroyer at home to have some quality time with his father while I indulge myself in some frivolous consumer activity.

And in case you come here only for the up-to-the-moment rural news bulletins that are our normal fare, I'll just quickly mention that A.'s friend Jason will be coming again on Wednesday for another day of standing around in the sleet to boil maple sap.

* A real-live maternity dress that I found for six bucks at the Salvation Army thrift store.  And it's not ugly!  And it doesn't show excessive amounts of cleavage! It's a non-Christmas miracle.
Posted by Kristin @ Going Country at 6:31 AM 6 comments: