Once Again, No Photos

The butchering of the buck has commenced. Cubby and Charlie are helping A. Jack is not.

I'm staying inside. It's warmer and way less gruesome than out there.
Posted by Kristin @ Going Country at 9:04 AM No comments:

When A. dressed out the buck he shot on Sunday, he brought in a pot containing the tenderloins and the heart. The tenderloins are just regular ole chunks of meat. Easy to cook and hard to mess up.

I've never actually prepared a deer heart before. It's been sitting in the refrigerator while I work up the desire to do so. Any recipe that starts with "squeeze to remove remaining blood" just somehow doesn't sound very appetizing.

But the heart is a muscle like any other piece of meat once it's been prepared correctly. So here I go to pump a heart that is not my own and then cook it.

Edited to add: That wasn't bad at all. Once I trimmed away the membrane that surrounds the whole heart and then sliced off the nasty bits at the very top--presumably where the arteries and all connect--the meat was quite pleasing, actually. No sinew or bones or fat or anything difficult, just nice red meat. Way less disgusting that plucking a chicken, for sure. I ended up with probably about a pound and a quarter that I cut into small pieces. I think I'll make goulash. Ghoulish goulash? Heh.
Posted by Kristin @ Going Country at 7:42 AM 2 comments:

Labels: all about me, country livin', fun with food, randomness

It's That Time of Year Again

When I go out to the shed to get some wood and am confronted with four severed deer legs on top of the woodpile.

No warning this time, either.

I didn't take a picture. You're welcome.
Posted by Kristin @ Going Country at 3:36 AM 2 comments:

Bring In the Buck, Boys

This is the second weekend of rifle season for deer, and A. was on the hunt for a buck. He got a doe last weekend, which has already been made into one roasted haunch for Thanksgiving dinner, plus two gallons of chili and two gallons of stock for the freezer.

His other tag was for a buck, which of course are less common than does and therefore that much more exciting to hunt. He's been out every day for the past four without even spotting a buck. But this morning, he went out, hiked to the neighbor's gully, and shot a buck within ten minutes.

And then he had to get it home.

He dragged it down the gully until he got just across from our house, then he dragged it up the gully bank and we brought him the utility sled to get it the rest of the way home. Cubby and Charlie had just returned from their church outing with the MiL. Good thing they were there to help. 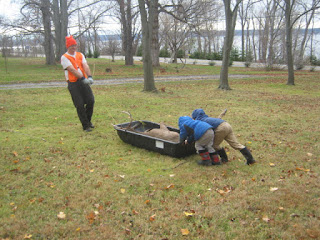 I'm sure A. never would have gotten it home without them pushing at the rear.

Once it was on our lawn, A. drove the Subaru to the sled and hooked the sled to the trailer hitch to tow it the rest of the way. 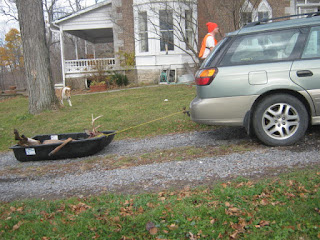 Dashing through the mud, in a one-buck open sleigh . . .

Jack was there, though his contribution was negligible. 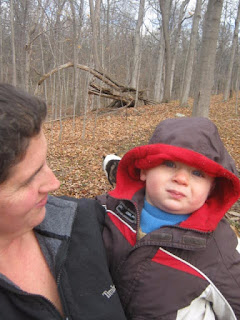 Deeply skeptical of this whole proceeding.

He did get a close-up look at the antlers, though. 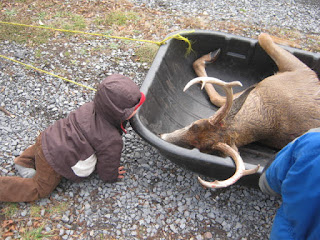 Blackrock baby and a buck.

The buck has been hung in a tree, thoroughly cleaned, and washed out with the hose. It is even now dripping onto the lawn, awaiting butchering next weekend.

You just never do know what a Sunday afternoon will bring at Blackrock.