Cubby is playing quietly and by himself (anyone with children knows why this rates italics) with his trains and cars, constructing elaborate scenarios of shunting and towing, when Charlie arrives on the scene to grab a very important vehicle and completely disrupt the fun.

Or: Charlie is playing quietly and by himself with the bags of coffee in the kitchen when Cubby arrives on the scene to grab Charlie in a headlock and completely disrupt the fun.

OR: Cubby is quietly watching one of his precious cartoons when Charlie arrives on the scene to turn off the television and . . .

OROROR: Charlie is sitting by the window watching the birds at the bird feeder when Cubby arrives on the scene to swipe at Charlie's cheek and create a nice long scratch that actually involves blood.

I don't know if this is a boy thing or a small child thing, but it's definitely not a mommy thing. Good Lord.
Posted by Kristin @ Going Country at 4:05 PM 2 comments:

In Which I Go Off the Rails

When A. bought me this shiny new laptop--which was three years ago, and so it is of course now a decrepit old laptop on which there is an extra wireless keyboard because some of the keys on the laptop itself broke and it always has to be plugged in because the battery is shot, both of which would have cost more to fix than this computer is worth, and so there you have the longest dash-enclosed aside EVER, GOOD JOB, KRISTIN--I vowed I would be better about organizing and deleting photos from it.

You can probably guess how well that went.

If you still have some faith in my vow follow-through (thank you for your misplaced optimism), I will now dash it by telling you that I just grabbed this photo from my laptop folder. It's from almost exactly a year ago: 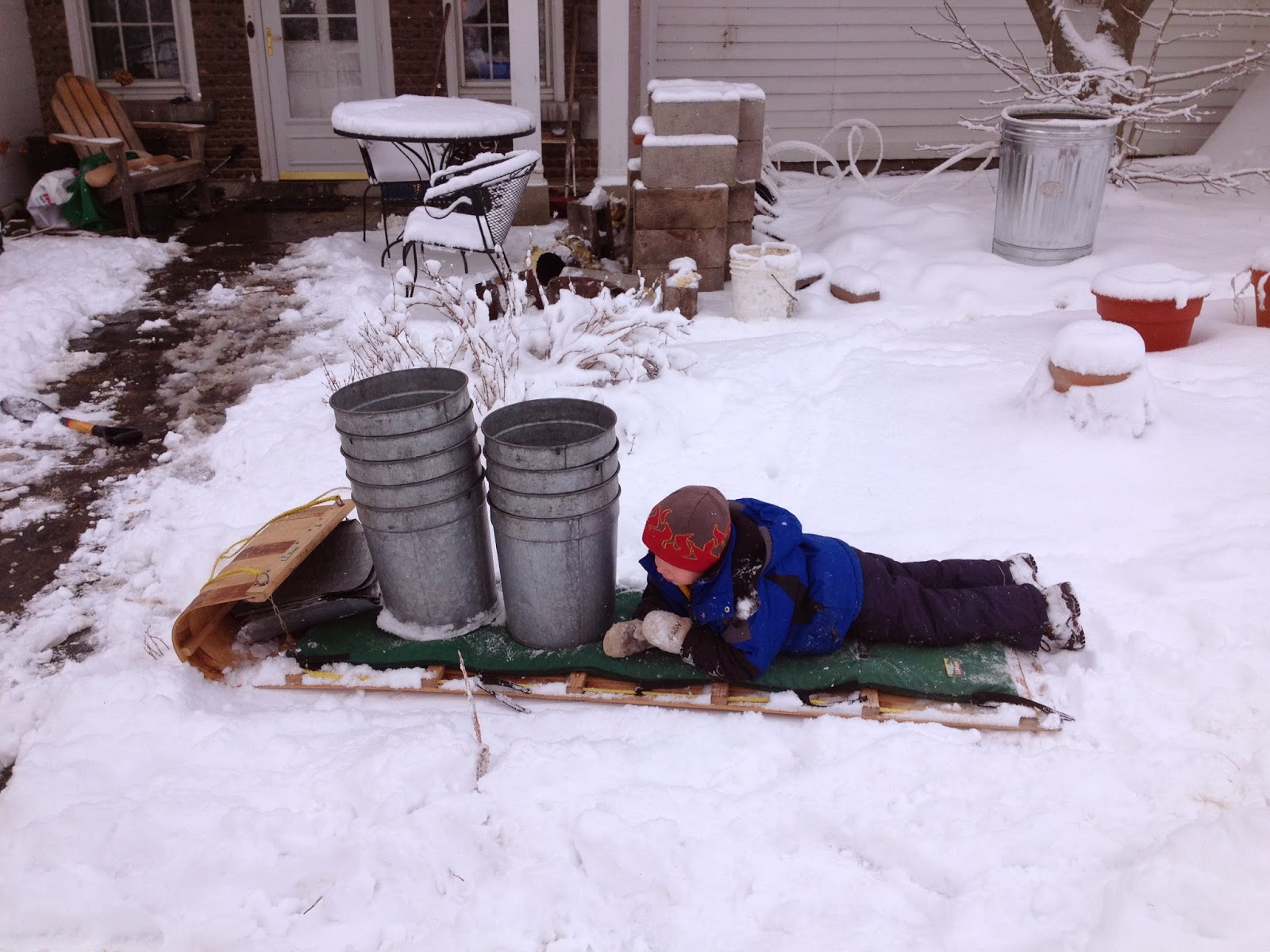 Off to tap some trees.

I could take almost that exact same photo now--snow, boy in that same coat and all--except for the fact that there is no way we're going to be tapping any trees in the near future. The forecast laughs at our attempts to find a stretch of weather in the next month in which the highs will be the forties and the lows will be below freezing (that's what makes maple trees run). There's nothing but winter to be seen for the next several weeks.

On the upside, that means A. might actually get a chance to take Cubby ice fishing this winter. With Mr. Jason, of course. They want to fish for burbot. Don't know what burbot is? Yeah, no one else does, either. It's a type of freshwater cod that apparently tastes something like lobster.

If they catch one, I'll let you know how optimistic that comparison is.

And in the meantime, perhaps I should use this housebound winter weather as an opportunity to get control of the photo situation on my laptop.

Or maybe I'll just sit by the fire and read a book. That sounds better.
Posted by Kristin @ Going Country at 10:56 AM 6 comments:

Labels: all about me, Cubby, friends, the A team, weather

The Other Side of Snow Days

It was a brief reprieve, however, thanks to that little storm that made its way to us last night. Due to the forecasted 6-10 inches of snow, all the schools in the area are closed.

Snow days are not a thing I'm too familiar with from my own childhood, since most of my school days were spent in places where they weren't an issue.

First I went to school in Hawaii; obviously no weather-related school closings in paradise. Next to Alaska; the only time they closed school in the three years I lived there was when it was 68 degrees below zero and there was so much ice fog the bus drivers couldn't see. And then I was in Tucson, Arizona. Snow and cold is not a concern there, obviously.

So the only place I remember the thrill of school being closed unexpectedly was in college in Northern Arizona, where the classes would occasionally be canceled. And what a joy it was.

But now I'm a parent. Parents do not get joy out of school closings. Parents get dread, for obvious reasons of hyperactive children and no opportunity to vacuum.

Cubby won't be very pleased either. He's still young enough that going to school is like playing, and he wasn't too enthused about going home when I picked him up yesterday.

Oh well. Snowpants and boots for all because I can see this is going to be a day of forced outside family fun. And hot chocolate. That might be the only saving grace.

* Large two-story houses are a serious problem to vacuum with untrustworthy children about. They could be --and probably are--doing anything while you're deafened by the roar of the machine.

Labels: all about me, Cubby, preschool

I don't know who this person is (hi!) who got up at five this morning and decided it would be a swell time to get that pesky EVERYDAMNDAY workout done before the kids woke up*, but I think she's kind of annoying.

I also think that push-ups at 5 a.m. should be reserved for boot camp. And my house, apparently.

* I do think the difficulty of this routine is increased by my efforts to jump and leap around quietly. Muffling my elephantine grace so the shaking of my old-ass house doesn't wake up the children requires some good muscle control. Blackrock is not a house built for calisthenics.
Posted by Kristin @ Going Country at 4:07 AM 2 comments: