Crushing on the Washing Machine

Last week I had our small-appliance repair guy--a high school classmate of the MiL's, because this is Small Town America--come to clean out our seriously underperforming dryer.

While he was here, I mentioned that we were going to be getting a new washing machine soon, since our current washing machine was purchased very used for $90 about ten years ago. And it wasn't really getting the clothes very clean anymore. And it didn't spin them particularly dry, either.

Bob the repair guy (yes, that is his real name) said that he always recommends a brand called Speed Queen, available at the locally owned appliance store we always go to in the Small City.

Bob has been fixing washing machines longer than I've been alive. If he recommends a particular brand, I'm gonna buy it. 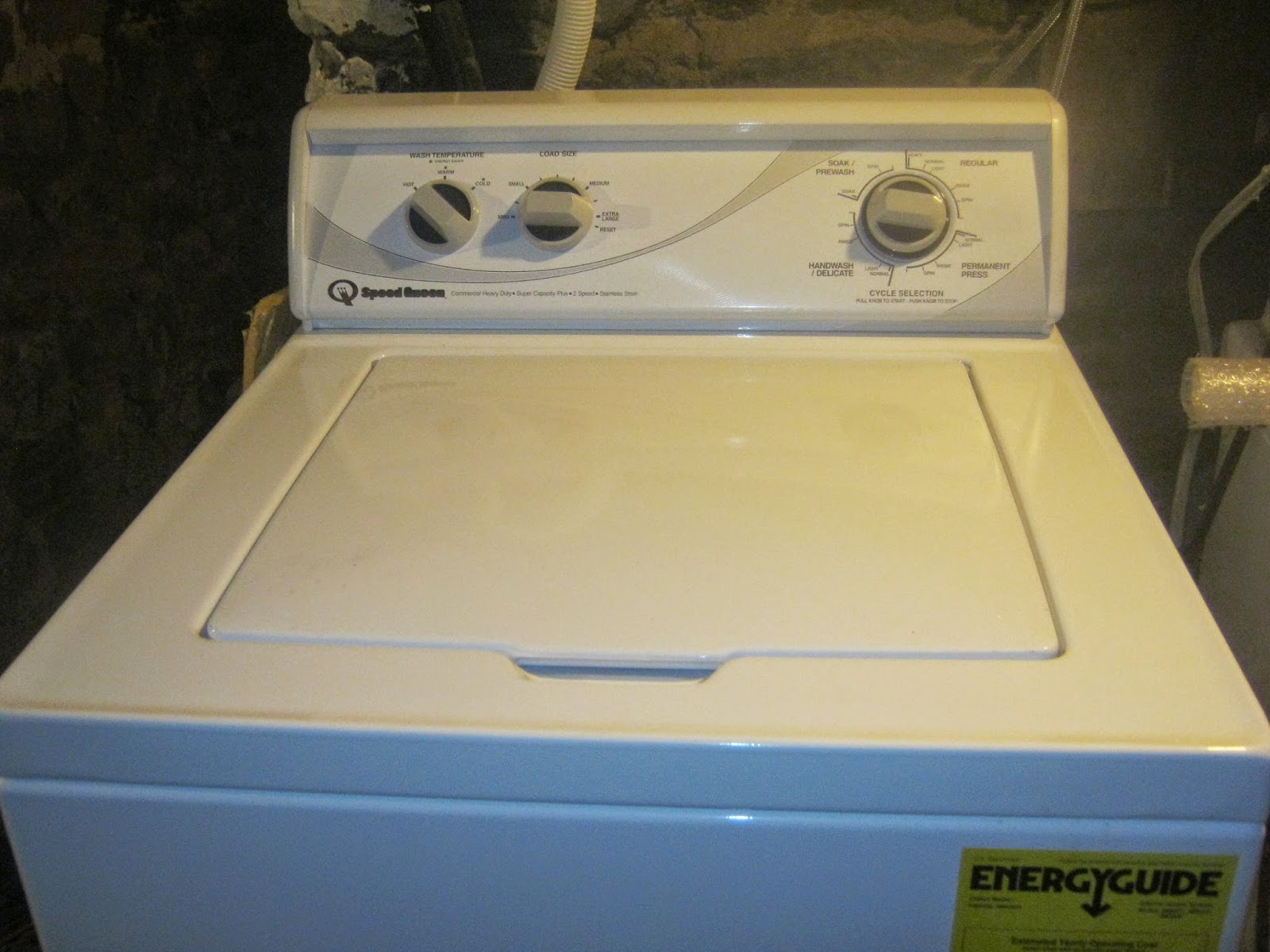 In addition, Speed Queen makes the machines that are used in laundromats. And by the Army. And, according to the salesman at the appliance store, the local dairy farms buy Speed Queens.

Well, I think that kind of machine could handle the level of filth generated by the inhabitants of Blackrock. I mean, we might not be at dairy-farm level grossness, but it can get pretty bad around here.

And finally, most machines for home use have an average life of eight years. The Speed Queen will hold up for 15 even with commercial use (so they say), and 25 years with home use.

A. bought it. It cost a few hundred dollars more than a cheap machine at Home Depot or wherever, but I have to think it will be worth it.

It was delivered yesterday. I haven't used it much yet, obviously, so I can't say if it will live up to the hype, but I must say I'm quite excited about the idea of it. It will be nice to have really clean clothes. That's all I really ask from a washing machine. And I think the Speed Queen will deliver.

And no, I have no affiliation with this brand and had never heard of it until Bob the repair guy tipped me off, so this is not sponsored.
Posted by Kristin @ Going Country at 6:37 AM 7 comments:

Labels: all about me, domesticity, randomness, the A team

Yes! That great day has arrived once again! The day when we all celebrate A.'s birthday with yet another rendition of "The Woodchuck Man Can." Every year, my lovelies. Every year.

Who can take two small boys camping overnight?
Who can sway the court by day and shoot varmints in the night?

Who can make a cane pole cut from our own land?
Who can dig the biggest ditch ever dug by hand?

Who can clear the cistern of a dozen rotting rats?
Who can shoot a doe and make it into chili just like that?

Happy birthday to A., the reigning woodchuck king of Blackrock.

P.S. As always, feel free to add your own verse should you be inspired. Or you could just say "Happy Birthday." That's always good, too.

I have had another thrilling domestic epiphany, similar to that "ohhhhh" moment when I learned about nuking a dishcloth so it wouldn't smell in the morning.

Bear with me. I find these things exciting.

This particular epiphany had to do with the tile on the wall surrounding the shower downstairs. It's very nice tile--handmade Italian tile with raised designs and fancy ridged grouting.

It is also a complete bitch to clean.

The fancy grouting and the raised designs are prime areas for mildew and mold to grow. And we have just about the most mildew-prone bathroom you'll ever encounter anyway, so this is a real problem. The only way I could get the grout and tiles clean was with a toothbrush. Attacking all the tile with a toothbrush took about an hour and left my hands in a claw-like state for an hour afterwards (even before I was dealing with pregnancy-related carpal tunnel).

Needless to say, I was never eager to get right on it. Which is why the wall was usually in really deplorable condition before I would reluctantly break out the toothbrush.

This is the condition it has been in for the past, oh, two weeks or so. But now I REALLY didn't feel up to the toothbrushing, thanks to the aforementioned carpal tunnel and being, um, nine months pregnant.

But I ALSO knew that if I didn't do it now, I was not going to be doing it anytime in the near future and I just could not deal with facing that horrifying wall of tile for the next two months.

And this is when I had my revelation: I needed a bigger brush.

I know. Sometimes I am not the brightest light on the Christmas tree.

The MiL had actually bought me a bigger brush some time ago, thinking it would work for that tile. But it had a long handle that made it really awkward to scrub a wall with. What I needed, I thought, was a big, long and flat scrub brush of the sort that I associate with maids in the Victorian era scrubbing floors on their hands and knees. Like this.

Or like a similar brush the MiL bought awhile ago for cleaning her horse blankets (I think), but that has actually been in more or less constant use in our house as a scrub brush for a lot of other things.

So I used it. And all hail the brush, I scrubbed that tile clean in ten minutes flat.

There were some areas near the corners where the toothbrush will still be useful, but overall, I have found my mildew salvation. Alleluia.
Posted by Kristin @ Going Country at 7:01 AM 4 comments: