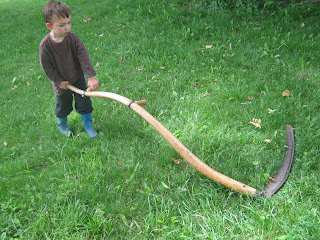 Yup, A. purchased an old scythe this past week (for various uses including possibly cutting some loose hay for the sheep in the neighbor's unused field), and do you think I could keep Cubby from trying it out? No way in hell.

Funny thing is, ridiculous as it looks to give an eight-foot scythe to a three-year-old, it's actually one of the safer tools he can use. It's too heavy for him to lift and the handle is so long he's a long way from the blade. As long as there are no dogs or babies in the vicinity, he can't cause any real damage; he just kind of pulls it along on the ground.

But I bet there's still more than one person out there shaking her* head at my parenting choices. That's cool. Doesn't bother me. And it could be worse. Cubby informed me today that now that he's three, he's old enough for a pistol, no doubt inspired by the very educational and (I now see) ill-advised book on pirates we got from the library yesterday.

That scythe doesn't look so bad now, does it?

* I use the feminine pronoun deliberately, as the odds are pretty low that any male head is doing anything right now other than thinking, "That scythe is RAD. I wanna try it."
Posted by Kristin @ Going Country at 11:16 AM 7 comments:

The Lesser of Two Evils

I just finished applying sealant to half of the grout on the tile wall around the bathtub in the downstairs bathroom*. Having now done that for the first time, I can say with some certainty that I would rather butcher a deer than seal grout.

And you know I know whereof I speak.

What with the cleaning of the grout with toothbrush and baking soda, and then with bleach and a sponge, and then brushing on the sealant, AND THEN cleaning each individual square of tile to wipe off the excess sealant, AND THEN DOING IT ALL AGAIN . . . screw it. Butchering a deer is faster and doesn't hurt my hands and shoulders so much.

The worst part is that I still have the other half of the grout to go. Dammit.

* Part of the ongoing project to bring our downstairs bathroom to any kind of acceptable state for the guests who use it. No, I have not yet finished painting. A. helped me caulk around the drywall last weekend, so the path is now finally clear for the second coat of paint on the walls and then painting the trim. After I finish this goddamn grout.
Posted by Kristin @ Going Country at 10:25 AM 3 comments:

Labels: all about me, Blackrock, manual labor

When I was younger--around 11 or 12 years old--I had a serious habit with the frozen french fries. I could eat about half a bag by myself. And would, with more frequency than I should have.

In this new life of mine, I don't buy frozen french fries. But did you know you can make them yourself?

OH YES, YOU CAN. And you should, because damn, they're good.

See, I figured this out after my Mother's Day gift to myself of canning seven quarts of potatoes. It was a pain in the ass. It took about three hours start to finish. I wasn't sure it was worth it. I have since used two of the quarts for things like last-minute soup and sending with A. and Cubby when they went camping. The canned potatoes didn't turn out mushy, as I'd feared, though they do taste a little overcooked. But it is nice to have cooked potatoes on hand.

Not nice enough that I was willing to do that again, however, and I still had a lot of seed potatoes left to take care of before they were too sprouted and unusable.

So I looked in the Ball Blue Book. Because that's what you do when you're trying to figure out what to do with excess produce. The newer version of it has a fairly extensive section on freezing, with several options for potatoes. Including french fries.

Right on, Ball Company. Now you're speaking my potato-obsessed language.

Their method involved actually frying the potatoes until they were lightly browned and then freezing them. In a puzzling omission, the book doesn't say how to cook the fries after you take them out of the freezer, but I presume you just fry them again, still frozen, thereby achieving the double cooking most people swear by for proper french fries.

But since I'm much more likely to bake french fries in the oven than fry them in oil, I did what I always do to make oven fries, but didn't finish cooking them. That is, I peeled the potatoes, cut them into pieces, mixed them all up with oil and salt, and spread them out on parchment-lined baking sheets. Then I baked them at 450 degrees until they were soft, but not crisp. After taking them out of the oven, I let them cool on the counter, than put the pans right in the freezer. When the fries were frozen, they were already separate and easy to take off the parchment paper and put in bags.

And it will be done in my house, from this day forward, amen.
Posted by Kristin @ Going Country at 11:59 AM 3 comments:

Today's Sunday Family Fun was a hike up to the woods near The Plantation so A. and Cubby could scout out a site to build a permanent lean-to for camping. A. requested that Charlie and I also go on this scouting expedition. Just before we left, I asked the MiL to take a picture of us. You know, so we would have more than the one photo of the four of us together.

Literally. This is the second picture ever taken of the entire family. And wow, is it ever a treasure.

You want a representative photo of what the Family Blackrock is really like? 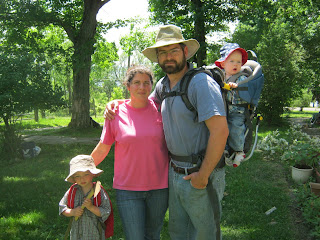 Cubby is carrying his very own hatchet, with a locust-wood handle lovingly carved for him by his father. I'm featuring my Summer Hair, with full-on frizz. A. is his usual bearded mountain-man self, with the addition of an infant strapped to him in the famous pack. And Charlie . . . well, Charlie just looks kind of dazed. Or maybe worried.

Not that I blame him if he IS worried. I mean, look at the family he found himself a part of. I'd be worried too.