Summer in upstate New York is "dish to pass" season. I always called such things potlucks, but around here, it's dish to pass. We go to a lot of dish to pass parties in the summer. And because I don't have a standard dish that I always bring to these sorts of things, every dish to pass party is an opportunity for creativity. And public failure, of course, but I prefer to focus on the positive.

We're going to a dish to pass birthday party this afternoon. What to bring? Since we have an absurd amount of lettuce in the garden at the moment, a salad seems inevitable. The MiL will take care of that. Because we often go to these kinds of parties as a household, sometimes we'll cheat and only bring one dish. So if I have a particular idea of what to bring, the MiL is off the hook. If she knows what she wants to make, I don't have to worry about it.

A. just brings us. And his enormous appetite.

But this time, we'll be bringing two dishes, because I have part of a beef roast that really should be cooked today. So I have to figure out something to do with that that will be acceptable to a crowd of people. It also needs to be able to sit out on a table outside for a few hours without getting gross. Which means nothing that has to stay hot. I think I know what I'm going to do with it (quickly seared, sliced thin, served cold with a sauce . . . of some kind), but you just never know what I'm going to show up with! Because I'm wild and spontaneous like that.

And if it's a dismal failure, I know there will be lots of other food and no one will know that I MEANT to bring something and then screwed it up. The beauty of the dish to pass: other people unknowingly cover your ass.
Posted by Kristin @ Going Country at 5:53 AM 7 comments:

Labels: all about me, confessions, country livin', country wisdom, domesticity, family, friends, fun with food, MiL, the A team

It's Friday! And do you know what I love to talk about on Fridays? That's right. Liquor. I've covered this topic once or twice before. On Fridays. Except it's not like I only drink liquor on Fridays, so I don't know why it seems so appropriate that Fridays be Liquor Forum day on Going Country.

I have gone through distinct phases in my drinking evolution. First, of course, is the Broke Phase, during which you pretty much drink whatever you can afford and/or can get someone to buy you if you're not 21 yet. (For my father: NOT THAT I DRANK BEFORE I WAS 21.*) This mostly meant cheap beer. I never really developed much of a taste for beer, though.

The Broke Phase usually coincides with the Shot Phase. Lots of shots. Of whatever swill is available. I hope to never again in my life ingest Jagermeister straight. Gross.

After college, I didn't drink much at all. Since the only time I really drank was when I was out with friends, and I wasn't going out a lot once I was working and doing all those other boring adult things, I mostly limited myself to the odd rum and Coke at happy hour with my co-workers. How dull.

Then A. introduced me to real mixed drinks, after we actually had enough money to have a respectable liquor collection. Gin and tonics. Sidecars. Hot buttered rum. Mint juleps. Slippery Slopes. Even frozen margaritas. All featuring very strong liquor cleverly disguised as tasty beverages. I do love mixed drinks. I also will occasionally drink sweeter kinds of wine. But mostly, bring on the cocktail shaker.

And now it's your turn, my fellow drinkers. Are you an oenophile? A beer imbiber? A whiskey sipper? What's your poison?

* For everyone else: I was actually 19 when I had my first drink--I think that's pretty restrained.

Labels: all about me, confessions, family, fun with food, the A team

It's Audience Participation Day! So, let's talk about the merits of Sonia Sotomayor as a Supreme Court Nominee. Do you agree or disagree with President Obama's nomination? Please provide three supporting arguments, and don't forget to double space.

HAAA! As if I would encourage such a discussion here. No, Going Country isn't that kind of place. We don't talk about the events of the day. We talk about trivial, but nonetheless personally important, topics. Like p.j.'s.

Everyone has their pajama preferences. I always, ALWAYS sleep in shorts, even in winter when the ice is forming on the walls. I can't STAND pants when I'm sleeping. My legs are always cocooned under two layers of wool blankets and a down comforter, so they don't need any extra layering. My arms, on the other hand, are more likely to be exposed. Therefore, I wear a long-sleeved t-shirt to bed in the winter, sometimes a sweatshirt if it's really cold. And a short-sleeved t-shirt in the summer. No tank tops. I don't like having bare shoulders. And what's the most popular style for pajama sets? Pants and tank tops. OF COURSE.

Also, I can't wear anything too loose to bed, because I'm very flippy when I'm sleeping and loose stuff just gets all twisted up and uncomfortable.

But I know I'm not the only one with strong pajama opinions. So what's YOUR p.j. preference? Lacy nightgowns? Frumpy flannels? Or do you go the Naughty Nekkid route? Do tell.
Posted by Kristin @ Going Country at 5:23 AM 13 comments:

Hey, remember the potato harvest? Remember the nine wine boxes full of potatoes that were put in the cellar in October? They're all gone. 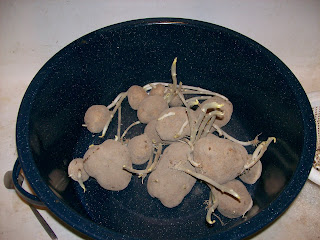 It was a good run.

The very last potatoes were consumed last night (roasted, if you must know, to accompany lamb chops and green beans). We did give away probably about two boxes worth to family members, but that still means we ate seven boxes of potatoes in seven months. A box a month. That's a whole lotta french fries.

And now I am left with the realization that there will be no more potatoes from the garden until at least July, when I can maybe dig up some new potatoes. So if we want potatoes between now and then, I'll have to BUY them.

I don't know if I can handle this.
Posted by Kristin @ Going Country at 5:12 AM 6 comments:

I have mentioned before that A. is not into gardening. He doesn't like fussing around with plants, transplanting and weeding and hilling and top dressing with compost and all the other million and one things that go into raising plants that will produce food. Except for a little bit of assistance in spading up the beds and harvesting potatoes (the man's got impressive shoveling skills), he stays out of the garden.

Except on Sunday, he discovered the joys of irrigation. 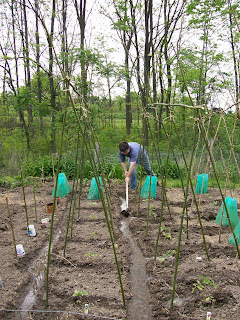 This is nothing more than a very large boy playing in the dirt.

After planting Hubbard squash, summer squash, pumpkins, cucumbers, green beans, parsley, and dill, I went inside to do the dishes, and A. went down to the beach to start the water pump. Next thing I know, he's out there in the garden, wandering around digging trenches with the hoe and flooding the plants with water. I ran out to supervise, knowing his tendency to get a little carried away with his projects, to the detriment of the environment around him. Since the environment around him this time included my precious baby plants, I raced out to make sure he wasn't going to wash them away, or step on them with his huge boots, or destroy them with the hoe. Or something.

See, we don't have a garden hose hooked up to the house water system. Which means that watering the plants involves literally carrying all the water from the cistern or the rain barrels to the garden. It's a bitch, and I hate doing it. Unfortunately, our summers are generally pretty dry. Last year was an exception, which is why everything produced crazy harvests and I ended up singing Tom Petty songs while I lost my mind (and gallons of sweat) canning the ridiculous number of tomatoes the rain-soaked plants produced.

I guess A. likes the Tomato Crazy, because he was determined to find a way to water the garden with the lake pump. The lake pump pumps out a lot more water than your average garden hose. You can't just train the flow of water onto the plants; they would wash away. So instead, he dug a trench along the sides of the garden, and then used the hoe to carve out some more trenches nearer the plants so the water would flow in between them. It worked really well. And A. was SO HAPPY wandering around with the hoe, digging this trench a little deeper, filling that one in to reduce the flow to this particular plant. He hasn't had so much fun in a long time. 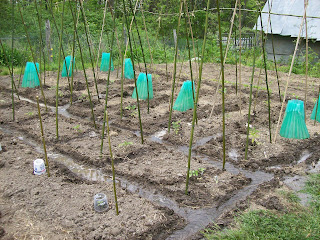 This is apparently how the date groves are watered in Saudi Arabia, where A. lived when he was young. It appears that young A. soaked up (geddit? soaked? HAAA) some lessons in irrigation during these formative years. So I predict that A. will be taking much more of an interest in the vegetable garden this year. At least as long as he gets to construct tunnels and dams in it.

More Garden Stuff--BECAUSE YOU LOVE IT

And if you don't, humor me.

Yesterday I planted the purple cabbage plants. This involved digging up a patch of ground that hadn't been tilled, because there were some over-wintered spinach plants in there that I wasn't ready to pull out when the rest of the garden was tilled. But they were starting to bolt anyway (meaning go to seed, which is when they become bitter and inedible), so I yanked them out and dug up the area. It was really weedy, so I had to dig it up and pull all the weeds out, too. And they were really good weeds, like dandelions, which have tap roots that I'm pretty sure go to China. Fun!

After the digging, hoeing, and raking were all completed, the purple cabbages went in. I left in one small chard plant that had been just starting to grow there, because I didn't have the heart to yank it out just as it started to get going. I'm such a sucker.

More than one person has asked me what kinds of tomatoes I put in. The varieties change every year, depending on what's caught our eye in the catalogs over the winter. We're impulse tomato seed buyers. Better than impulse car buyers or something, I guess. Anyway, this year, I have in Black Krim, Jet Star, Primetime, Giant Tree, Celebrity, Baby Cakes, Kellogg's Breakfast, Stupice, Roma, and San Marzano. And I'm not going to post all the descriptions of what those are, because A) I am too lazy to cut and paste that much, and B) I'm assuming most of you don't really care and those of you who do can look them up yourself.

So with that pleasant directive, I wish you a happy Sunday, duckies!
Posted by Kristin @ Going Country at 5:53 AM 8 comments: