Yesterday when I was threatened by a falling container of frozen beans that almost crushed my foot, I decided the small freezer over the refrigerator had really gotten out of control. So I started pulling out unnecessary things, like three bags of cornmeal and some ham bones saved for future soup. These things got put in the big chest freezer. As I got deeper into the little freezer, I found a package of bacon that I didn't even know was in there.
That's what I call a lucky break.
The lucky bacon is even now on the stove, sizzling away for Saturday breakfast, to be combined with some eggs and fresh tomatoes, also cooked in the bacon grease. Life is good.
Posted by Kristin @ Going Country at 7:33 AM 6 comments:

This morning I was wandering around outside letting the chickens out, picking some ripe tomatoes (yay!), checking for eggs in the random spot on a hay bale high in the barn that Penny the hen has decided is perfect for egg-laying. You know, morning chore stuff. And as I was wandering, I was of course cataloguing all the crap that just isn't getting done. The sumac forest and thistles that need to be cut down in the sheep pastures, the weeding, the picking up of random buckets and tools, and on and on and on.
Then, to further cause anxiety, I started to think of all the endless chores in the house that have been sliding: cleaning the bathroom, taking the shower curtain down and scrubbing it with bleach outside to get rid of the ever-present mildew, dusting, vacuuming, de-cobwebbing (totally a word, yes), sewing on the button that came off my pants, ironing . . .
Anyway. I was frustrated and starting to get annoyed. Then, when I was looking for a photo to post today, because I figured that would be better than bitching about all this crap I'm behind in (oh wait, did I just do that? my bad!), I found this photo: 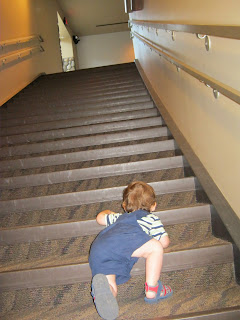 Sing it with me now! Cliiimb every mountain . . .
I suspect there is some inspiring message I should take away from this, about how seemingly daunting challenges are only exciting opportunities and how our children are the best teachers, etc., etc. But mostly I just thought it was really cute. So have a photo of Cubby quite happily climbing an excessively long staircase at the museum in Kenosha, Wisconsin. And take from it what you will.
Happy Friday, poppets!

Hey, what did you do last night? Eat some dinner, do the dishes, maybe read or watch a little TV before bed?
Yeah. I plucked chickens.
This was not my plan. My plan was to do some of the work I'm actually paid cash money for (freelance editing, that is). But around six o'clock last night, Cubby and I were out in the old milk barn watching A. playing around* with the free weights and the weight bench he threw in there, when A. and I started talking about the chicks. Because we were right next to the chick cottage, you see. Except they're not so much chicks anymore, but more chickens and a WHOLE LOT of roosters. The last time I had a chance to see a bunch of them together, there were 17 total that I counted, and 12 of those were roosters. Nasty, chuffy roosters that have started fighting and spurring and crowing and generally announcing that their date with destiny had arrived.
Forty-five minutes later, Cubby was in bed, four roosters were shut in the coop, and I started heating a pot of water on the stove for the scalding.
A. did the throat cutting, the dunking in the scalding water, and the rough plucking. I did the detail work, pulling out the little bits left in the skin and making sure the birds were as clean as possible. I'm assuming these will be the ones we'll be roasting whole, since they will be the youngest, so we really want to leave the skin on them and get the skin as free of feathers as possible.
After they were plucked, I held them by the feet while A. singed them with burning newspaper to get the little bits of feather that remained. Then he eviscerated them and cut off the heads and feet. After that they just needed to be rinsed with the hose and put in the refrigerator to chill.
From the first fatal cut to the pan of chicken in the refrigerator was just over an hour. That's probably a pathetically long time to people accustomed to dressing chickens, but since we've only done one at a time in the past, we were pretty pleased with how quickly four went. A. killed and dressed one a few weeks ago for dinner, just so we could try one, so counting that one we have now disposed of five of what I suspect will end up being about 16 roosters.
Not a bad night's work. Fried chicken, here we come.
* By "playing around" I mean dead lifting over 300 pounds before stopping because he didn't have enough weight to put on the bar. Crazy man.
Posted by Kristin @ Going Country at 4:37 AM 6 comments:

So You Think You Want Sheep

Maybe the idea of a grazing flock on your lawns has struck your fancy; a bucolic scene in which there are no lawn mowers spewing fumes or consuming costly gas. Or maybe you just want to raise some lambs for meat. I won't dissuade you from either of those goals, but you should know what you're getting into. And so, for purposes of education, let's review our flock's grazing session yesterday.
A. let them out of their pasture because the high temperatures and lack of rain has pretty much killed the grass in there. He blocked off a section in the back of the house behind the forsythia so they could eat the weeds and grass that has been growing mostly unchecked back there. Because there was a lot to eat there, he thought if he just blocked the major openings in the forsythia hedge and up the lane, they would stay put.
He should really know better by now.
The sheep did not want to stay where all that good grazing was. They forced their way through the forsythia hedge (some of them getting quite comically entangled for several minutes before breaking free) and made their way purposefully towards the flower bed to eat the MiL's day lilies.
A. herded them away from the day lilies and then ran to get in front of them to cover up the rose bush before they ate that. They made their way around the house, eating the forsythia hedge as they went. After a few minutes they were near the gate to the paddock by the house, so A. let them in there and shut the gate behind them, thinking they would eat the weeds in there and he could relax for a little while.
A few minutes later I saw a couple of the big Cotswolds climbing (with their front legs only--obviously, sheep can't really climb trees) the small pear tree in the paddock and eating the pears on the lower branches. Wretched things.
A call to the shepherd resulted in much cursing and the locking of the flock back into the pasture. The whole excursion lasted maybe 15 minutes and involved no less than four incidents of damaging grazing.
But that's what sheep do. They wander around and they eat. Anything. Usually the things you most want them to stay away from. Also, they shit everywhere they go. And sheep poop is fascinating to toddlers. They will pick it up. And it is gross.
Just something to keep in mind when you get all starry-eyed about a sheep flock.
Posted by Kristin @ Going Country at 7:25 AM 6 comments:

A. and I said our vows at the little white country church a few miles up the road. In those eight years, there have indeed been good days and bad, sickness and health. We've been richer and poorer, but always had enough. (Sometimes just enough, but enough nonetheless.) We have loved and cherished and occasionally wished to throw the other person out of a window.
That's marriage, you know.
We've progressed from a studio apartment in the ghetto in Phoenix to a crappy basement apartment in a respectable neighborhood in Albany to Blackrock. A. started with goldfish, then we got a dog, and now we have sheep and chickens.
And of course, now we have this: 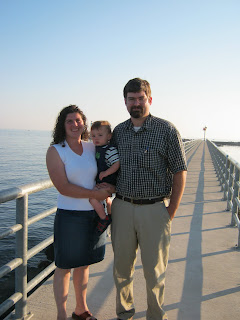 "This" was desperately in need of a nap and could not understand why we were standing on a pier jutting into Lake Michigan at Indiana Dunes State Park at seven in the morning. He was a good sport anyway, though.
It's been a partnership in the truest sense, and I see no reason why the next eight years shouldn't be just as interesting. And the next eight after that, and after that, and after that.
We'll just keep on keepin' on, for as many years as there are. As we vowed, eight years ago today.
Posted by Kristin @ Going Country at 6:05 AM 18 comments:

Labels: family, the A team

I Wish I Could Hug 60 Degrees

This may be the first time in days that I have not been sweating. Literally. I've been sweating all day as I chase Cubby around and stand in the full sun with him in the lake and water the parched garden and the parched animals. Then I'd take a shower before bed, only to sweat all night when I would try (and mostly fail) to sleep in our over-90-degrees-at-all-times bedroom. All the time flushed and damp and dealing with a constant state of low-level misery.
And now it's raining.
There's really nothing like rain after a stretch of punishingly hot weather. I'm not going to say that there have not been many times in the past week or so when I have wished fervently that we have air conditioning. That would be a big, fat lie. But there's no doubt that not having it makes us so much more appreciative of something other people see as a minor annoyance or a slight variation in a climate-controlled life.
Thanks for the rain, Mama N. We all needed it.
Posted by Kristin @ Going Country at 5:22 AM 9 comments: