Okay! Now that we've all spent the last three days eating, drinking, and generally celebrating Our Great Country with wild revelry, it's time for us to continue the celebrations with yet another great American tradition: The family roadtrip.
That's right. Going Country is going on a roadtrip. A., Cubby, and I will be hitting the road tomorrow for Illinois, where my cousin is having a very large reception on Friday to celebrate her wedding. The wedding actually occurred in Mexico a couple of months ago, but they're having this reception for all the people (hi!) who couldn't make it to Mexico. My dad rented a house on a lake in Wisconsin where all of my immediate family will be staying. It's going to be a party.
But first we have to get there.
Today I will be spending my day gathering the various accoutrements belonging to the child, as well as all the food we're bringing in the car in coolers, plus clothes and the jars of jam for my family and toys and water shoes and those chunks of wood we're bringing for my dad to bring home . . . Well. It's going to be a busy day.
We're planning on leaving at 4 a.m. tomorrow. The idea being that we can just take a sleeping Cubby out of his crib, put him in his carseat, and make it a few hours down the road before he actually wakes up. Of course, this may end up being like the time we took him on a late-night plane ride hoping he would sleep and then he, uh, didn't. But at least with the car we can stop and get out and let him run around. To that end, we've planned a route that does not involve much freeway driving, so we can pretty much just pull over whenever the need arises.
But still. We're talking about 15 hours in a car with a child who rarely spends more than half an hour in his carseat. It will be an interesting experiment. Cubby often pleasantly surprises me when it comes to untested situations, however. I guess if you expect the worst, then anything else is just a bonus.
No matter how those two and a half days on the road go down, we will eventually make it to Wisconsin, where we will sit on a different lakeshore and play with my niece and eat, drink, and be merry once again.
I will probably not be taking any time from the merry-making to spew my usual drivel here. Certainly not while we're on the road. If my parents bring their laptop and this house we're staying in has Internet access, I'll probably send a shout-out from Wisconsin. But I'm not going to make a great effort to do so. Just so you know.
So send all your positive vibes to the Family Blackrock as we embark on our voyage. And stay tuned for the undoubtedly hilarious stories that will result.
Hasta luego, poppets.
Posted by Kristin @ Going Country at 4:47 AM 15 comments:

Labels: all about me, family, travelin'

Saturday night, we had a bonfire on our beach with a few friends and a few fireworks someone brought.
Last night, our next-door neighbors had a much bigger bonfire on their beach with many more friends, an impressive array of food, a table fully stocked with every imaginable liquor, beer, or wine (plus some seriously kick-ass made from scratch margaritas--YUM), and a LOT of fireworks.
It was pretty bad-ass. They even had glow sticks. Our neighbors throw a good party. And I very much enjoyed attending a party in which the travel to the party did not involve strapping Cubby into a carseat and driving anywhere. Walking down the driveway and down the lakeshore about fifty yards is the way to go.
Today we have yet another soiree to attend. There will be more food. More alcohol. More fire. What better way to celebrate the good ole fun-lovin' U.S.A. than with three days of excess? Seems about right to me.
Happy Independence Day, duckies! Go have some fun and blow some shit up. It's the patriotic thing to do.
Posted by Kristin @ Going Country at 5:03 AM 2 comments:

Telling you that A. is really strong is like telling you that Cubby is really cute, or that I really like potatoes. Understatement. That's what calling A. "really strong" is.
He's not a small man anyway, but his strength relative to his size is really phenomenal. Phenomenal in the literal sense, in that he's something of a phenomenon when it comes to lifting heavy things. Not weights on a bar, although he can do that, too. No, his incredible strength gets used with some frequency at Blackrock for practical applications like lifting the lawn tractor so I can put jack stands under it or lifting the washing machine so the dogs can kill a woodchuck.
Or this. 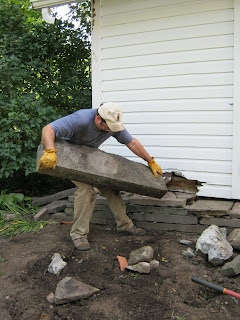 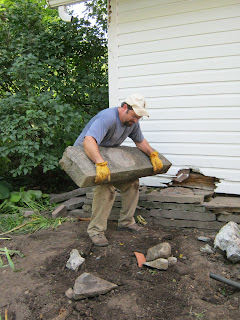 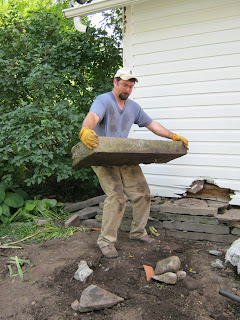 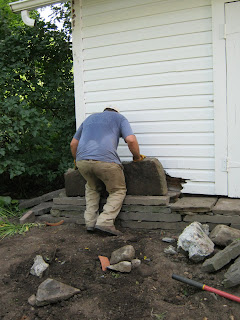 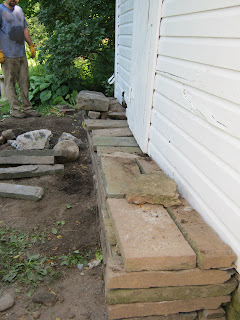 No one should be able to lift that stone like that. That thing weighs probably 350 pounds. But that was the stone that A. wanted for the end cap on the foundation wall. I couldn't even budge one side of it. So he lifted it into place by himself. It was, as the MiL remarked, impossible. But somehow A. made it possible.
He's a useful sort of man to have around. I think we'll keep him.
Posted by Kristin @ Going Country at 6:13 AM 9 comments: