Long version: Everyone ate their meatless food in whatever combination pleased them. Works for me.

Long version: I still had the sort-of-barbecue sauce from the brisket, but no meat in it. So I browned some of the pork sirloin, dumped in the sauce, simmered until thick, and done. It was surprisingly good.

Long version: Last year for Easter dinner I made hamburgers, french fries, and milkshakes. This year I made nachos. I think my holiday theme is restaurant-style junk food at home. But in all honesty, I would much rather eat nachos than ham, so I did.

Life is too short to be a slave to unappetizing traditions.

I did feel I should make some effort for a dessert, even if the kids had stuffed themselves with chocolate at 7 a.m. So I made coconut-flour cupcakes from a recipe the MiL got out of her BJs magazine like six years ago. They don't have any wheat flour in them, so everyone can eat them. The lemon glaze isn't in the recipe, but it is good. Just lemon juice mixed with powdered sugar and poured over the cupcakes while they're still warm so it soaks in.

And here we have the early morning Easter helper: 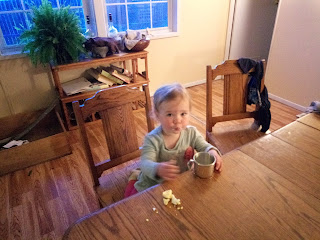 The early bird gets the cracked Easter egg for first breakfast.

Long version: Miss Rebecca is Miss Amelia's daughter. She stopped by on Sunday afternoon on her way to bring Miss Amelia home from their family Easter celebrations to deliver a casserole she had made for us. It was a kind of enchilada casserole with corn tortillas, ground pork, green chili sauce, and cheese.

It was very good. Unfortunately, Miss Rebecca, unlike Miss Amelia, has no problem with spicy food. This was way too spicy for me. Too spicy for Jack and Poppy, too, who had tacos with some of the leftover meat from the nachos. Charlie ate his serving of green chili, but didn't ask for more. Cubby ate two servings and announced that he likes the way spicy food feels in his stomach.

Long version: I amused myself by thinking of names for this stew that combined the two meats in it. It could be Beep Stew, or Sheef Stew, or, going in another direction, Button Stew. Get it? Beef and mutton?

It was really good. I used some bacon in it this time, along with quite a lot of garlic and about half a can of tomatoes, so it had a very good flavor. Sometimes I find stew to be bland--even stew I make myself, which is annoying--but this wasn't. Bacon and garlic have that effect.

Long version: Another 4-H meeting at 4:15 p.m. seemed like a good excuse to eat leftovers. Anyway, we had stew, green chili casserole, and taco meat left, so there were plenty of options.

Long version: We bought another house this afternoon. Not because we're moving out of this house, but because this was the property adjacent to ours, and the house is about 200 yards from our house. It's been abandoned for about a decade, so the price was right. 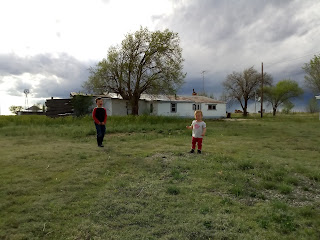 There's no electricity hooked up at the moment and one of the bedrooms appears to have the remains of a pigeon scattered about it. So, you know, it won't be appearing in the pages of House Beautiful anytime soon.

We celebrated our dual homeownership with steaks and a tour of our gracious new abode. Which is when we discovered the remains of the pigeon. Also, this is the kitchen. 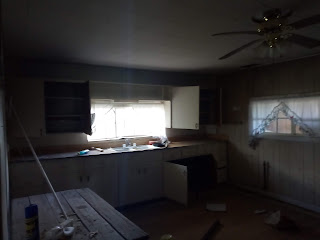 As long as I don't have to put curtains on my (current) dining room windows to keep neighbors from looking in, I don't care about the kitchen. And as long as I don't actually have to cook in that kitchen*.

* A kitchen, incidentally, that did not have running water and electricity until the 80s. The 1980s. Like, after I was born. Modernization was slow in coming here, to say the least.


Now that it's the Tuesday after Easter, I think it's time to throw some pictures your way, right? Right.

So this girl woke up at 4:40 a.m., which definitely makes it challenging for the Easter Bunny to do her thing. 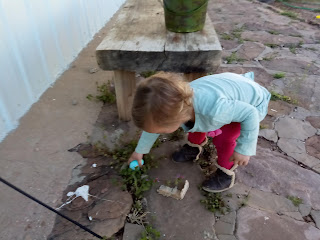 I guess she figured Jesus rose, and so should she.

Nevertheless, there were eggs* hidden outside to be hunted. 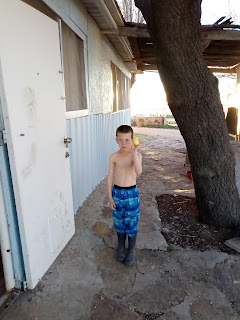 This is such a classic Charlie photo. Shirtless, with the joy of Easter just radiating from his face.

And there were baskets, too. 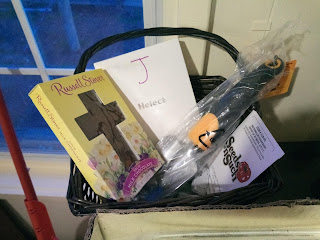 Chocolate crosses, peanut butter bunnies, calculators, trowels, and vegetable seeds. No jelly beans, because no one likes them. No plastic "grass" either, because that is an abomination.

After which I presented them all with egg salad and crackers, which they of course ignored in favor of eating all the chocolate. 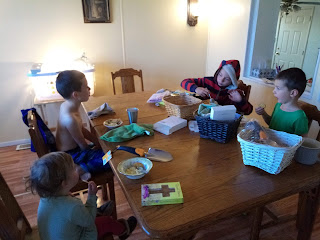 I have fond memories of doing the same thing in my own chocolate-fueled childhood.

Then we got all dressed up and went to church. 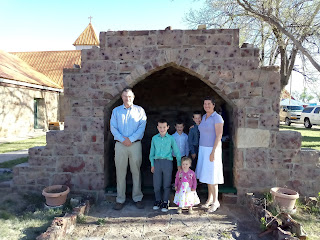 Floofy dresses are a definite perk to having a little girl.

Upon returning home we put the new trowels to work planting the miniature roses that were handed out at church. 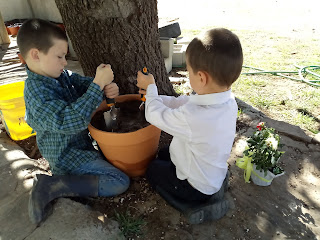 Those trowels? They're Fiskars. The Easter Bunny had some help from the MiL on those, and now my children officially have better trowels than I do.

There was also a big planting frenzy by A., who helped the boys plant every single seed they got in their Easter baskets. So we now have about 40 hills of corn, five hills of watermelons, and a twenty-foot row of green beans planted. It's too early for the corn and watermelon, really, but we'll worry about that later. We can always re-plant if we have to, I guess.

Oh, and what did we have for our special Easter dinner? Not ham. 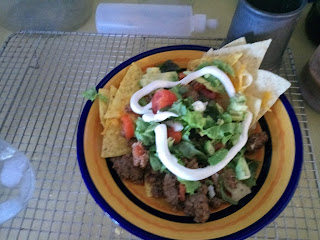 Build Your Own Nachos. Because I'm an adult and I can make what I want on holidays. There has to be some upside to this adulthood nonsense.

And there you have it. Easter is over and we are closing in fast on the end of school.

* Incidentally, are we the last people in America that dye and hide real eggs? All I see anymore are the plastic ones filled with junk. I feel about those the same way I feel about plastic grass.