I'm Choosing to Focus on the Positive


It started snowing lightly about an hour ago, and I was looking out at the gently falling snow thinking happy thoughts about Christmas-y weather and cozy houses. Then I came across this photo that A. took last year, in November. Not happy. And will for sure happen sometime in the coming months.

Thankfully, there are plenty of happy things to focus on inside the house, too. 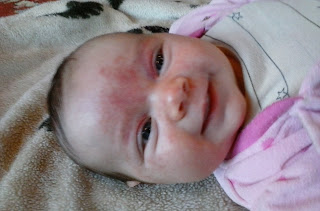 Like smiling babies. Doesn't get much happier than that.

Happy Friday, my lovelies. I hope you're finding the happy wherever you are.


This morning I had to confiscate a rubber bracelet imprinted with "Jesus Loves You," because it was being treated as a giant rubber band projectile by my precious little gifts from God.

Jesus loves you, but not when you try to take out your brother with a Sunday school bracelet.

Anyway. That has nothing to do with the rest of this post, which is all about a beaver. Or rather, about another beaver*. 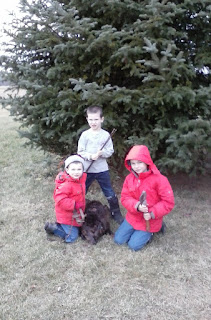 And here it is, with its eventual consumers.

That photo, by the way, is totally staged. Jack is holding a trap, which he is not normally allowed to handle. Cubby is holding a hatchet, which he is normally allowed to handle but which doesn't play any part in the trapping of the beaver. And Charlie didn't even go to check the trap, instead just running out for the photo op when the real trappers returned with the rodent and then going back into the warm house to continue building with Tinker Toys. He's holding the trap setting tool. What a fraud.

Now that A. has trapped another beaver, I am required to make beaver tacos again. I can do without them, personally, but the kids love them. Like LOVE LOVE them. They talk all the time about the beaver tacos we had last year, so of course, when they saw this beaver, they were all, "YAY! Beaver tacos!"

A. and I are less enthusiastic. Beaver meat is okay, but it's awfully . . . red. I know that sounds weird, but it's really, really red, in an almost disturbing way. Kind of like liver, and man, I really hate liver.

No matter, though! It's not about me. A. did all the cutting and trimming of the meat for me, so all I have to do is cook it. Which I did by putting the meat in some water to come to a boil, and then forgetting it was on there when I took Jack down for his nap. I came upstairs to a stove covered in boiled-over beaver juice.

It is about as appetizing as it sounds, yes.

I got that cleaned up, though, and now have the meat successfully simmering gently on the stove. I also have a grouse in the refrigerator to cook. A. shot it when he was deer hunting. Grouse I can wholeheartedly recommend. They taste like really good chicken.

Beaver in the pot, grouse in the refrigerator. It's a northwoods kitchen for sure.

* I just realized I never responded to a person in the comments of that post who asked if we have a lot of beavers in our area and what kind of trap A. uses. The answers are: There are a TON of beavers here. A. is trapping them at a neighbor's hunting cabin, where there are so many that the cabin is in danger of being submerged in the ever-expanding beaver pond. And the traps A. uses are instant kill traps set under water, so they're very humane. 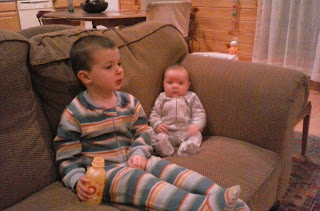 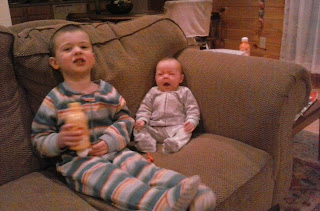 When even the baby is yawning, you know it's too early.