Long version: A. bought these huge bone-in chicken breasts when he was last at the store. I was kind of grossed out at how big they are, actually, imagining what the chicken that carries around such a breast must look like, but it is convenient that I only needed to cut the meat from one up into chunks for the stir-fry. It ended up being two whole cups of meat, which I marinated for a couple of hours.

The rest of the stir-fry was frozen stir-fry vegetables with some sliced onions I had cooked the day before and extra frozen green beans. The sauce was soy sauce, vinegar, garlic powder, ginger, and peanut butter.

Long version: I poached the remaining two giant chicken breasts and then shredded the meat from them before combining that with some sauteed diced onion, two tiny cans of tomato juice from Miss Georgia's box of food, and a packet of taco seasoning from the same source. The seasoning didn't actually have any sketchy ingredients in it, but the combination of the tomato juice and the seasoning packet made for some pretty salty chicken.

I adjusted the amount of salt in the tortillas accordingly, though, and it was fine.

Long version: We woke up to the year's final lamb this morning. It was a nice big boy. 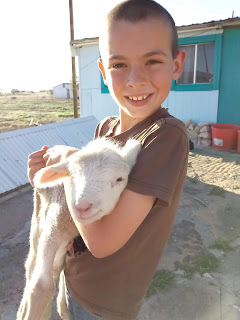 So this year's final lamb count: 4 girls, 1 boy and no ewes left to deliver.

My original plan for dinner included a soup made from the sausage and the liquid from poaching the chicken, and peanut butter cookies for dessert. But then I spent some time chasing wandering sheep in the late afternoon and I was hot by the time I got them all in and had to start dinner, so I nixed both the soup and the baking.

Long version: It's been awhile since we've had meat+rice+cheese, but here it is! Courtesy of leftover taco chicken, leftover rice, and the ten-pound block of cheese I get from Sysco.

Long version: One of Miss Georgia's deliveries included a large package of flour tortillas. My children were THRILLED, as I do not ever buy flour tortillas. They've been happily eating them for breakfast and lunch. There were just a few left, so I heated up the leftover chicken and rice, rolled it into the tortillas, and fried them for a minute on each side until they were crispy.

I was pretty sure the children would like this, but I wasn't prepared for how much they liked it.

From Cubby: "Well, this is the best food ever."

From Jack: "I could eat a million of these."

From Charlie: "Delicious and nutritious."

From Poppy: Silence, because she was too busy stuffing her face.

Too bad for them the tortillas are all gone.

Long version: I made bacon for breakfast, and there was quite a bit left over. So I started by cooking diced onion in bacon fat, then throwing in the leftover diced bacon, a 12-ounce can of tuna, a couple of tablespoons of mayonnaise, some frozen peas, and about a cup of shredded cheese.

It was really quite tasty, although I have no idea what to call it. "Tuna thing" sounds appetizing, right? 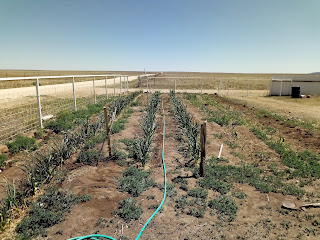 A few of the many rows of garlic A. has.

Charlie started counting all the garlic plants but stopped at about 1,400 plants. Some of those are smaller and won't be producing usable scapes, but we still have many, many scapes to use.

I started with pesto.

I used the food processor to combine scapes, a few lamb's quarters plants we pulled up in the pasture, a handful of walnuts, and olive oil to make a pesto.

Then I put it in everything.

The lamb stew was just stew meat from the wether with a lot of sliced onion, a small jar of pureed tomatoes, the liquid from poaching chicken for the chicken tacos (it wasn't really a stock, because it was literally just the water and chicken), and some carrot and potato chunks. To that I added a few spoonfuls of the pesto, and the whole thing turned out really well.

As did the bread for the children, which was simply slices of bread with butter and pesto spread on them and then broiled.

And the asparagus, which was store asparagus that A. bought when he had to go get hay. I just cooked it covered in some butter, then added the pesto and a tiny bit of shredded parmesan that's been sitting around in the refrigerator forever.


Yesterday all four children were playing a game and Charlie came to me very upset, saying Poppy was ruining the game.

"It's a gorilla game, and she keeps saying she's the mommy gorilla!" Charlie told me in great agitation.

"NO, YOU'RE NOT!" Charlie yelled back at her.

"Okay," I said calmly. "What's the problem with her being a mommy gorilla?"

To which Charlie replied, "She ALWAYS wants there to be mommies and daddies and we ALWAYS want to play killing games! THERE ARE NO MOMMIES IN KILLING GAMES!"

It's hard to be the sole female sometimes.

Back to the (Sur)Real World


We received notification quite suddenly yesterday that there would be Mass this morning at our church. There were, of course, rules regarding how many people could be in the church--in our small church, that's 33 people--and everyone over the age of three was required to wear masks.

I must admit that my initial reaction was, "No way. How am I gonna keep four little kids in masks for an hour?"

When I suggested that maybe I should stay home with the younger ones, Jack immediately said that he wanted to go, and of course Poppy wasn't going to be left behind. So we had to come up with masks for all of us.

We have one fabric mask our neighbor made and gave to us, two hospital-grade N-95 masks that A. bought about a year ago to have on hand for sanding projects and so on, and a lot of large cloth napkins.

The professional masks are actually pretty hard to breathe through (props to the medical professionals who wear those every day), and we weren't expecting to be in close proximity to anyone, so I decided not to use those.

Charlie wore the one fabric mask, and the rest of us wore the cloth napkins, tied bandito-style around our faces. 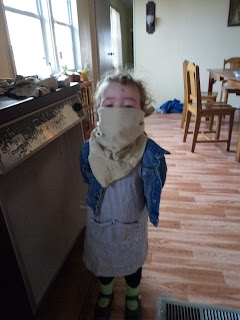 Not technically required to wear a mask, but not about to go without one if her brothers had one.

We had a really fun few minutes before leaving for church when we were trying to figure out who would wear what, and the children complained that the (clean) cloth napkins smelled funny, so we tried rubbing them with lime, and then I put a tiny bit of the perfume I never wear on them.

I found my napkin-mask extremely hard to tie because of all my hair that kept getting tied up in it, and I also found it very hard to keep up because it stretched out just a teeny bit. The kids did really well, actually, although they did all escape with me halfway through the 35-minute service when Poppy announced she needed to pee*.

There's no bathroom in our church, so I had to bring her outside to the village's public bathroom. The three boys all came with me, and as soon as we got out the door, ripped off their masks and started gasping theatrically.

But they did keep them on the whole time with minimal complaining, although with a lot of slipping and readjusting. We need to get real masks with elastic to go around the ears, because I guess this is the new normal.

* She also informed me, at full voice in a quiet church, that she needed to poop. Two-year-olds are not known for discretion.