Friday Food: Using It Up


This week was all about eating perishables before we left for our trip to Arizona. And apparently, also all about fajitas.

Long version: This was the day of our Fun Family road trip, which meant that I had recently visited a grocery store. And that is why we had such thrilling and highly perishable items as cucumber, grape tomatoes (the only kind worth buying at a store), and fresh pineapple on hand.

Just a little bit of deprivation is very good for cultivating gratitude. Because when you only have access to fresh pineapple once a month and you know once it's gone you won't have it again for another month? That pineapple tastes extra-sweet. And this one was already really sweet. 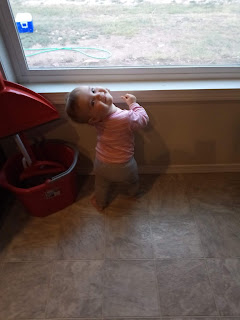 Almost as sweet as this girl.

Long version: It seems the mule deer around here are even milder in taste than the white-tailed deer in New York. A. really needs to go hunting.

I had labeled this bag of venison "stir fry meat," but since we had had stir fry just a few days previously, I used it for fajitas instead. For some reason, recipes for fajita marinades online all seem to include soy sauce. And lime juice. Who am I to question the wisdom of the internet? I used both, along with chili powder and cumin, which isn't included in most recipes, but which I consider to be mandatory in any sort of Mexican food.

I guess I'm a rebel after all.

We usually use sharp cheddar cheese with tacos or fajitas (and everything else), but I had picked up some queso fresco at the store the day before. The name literally means "fresh cheese," and it's meant to be crumbled on top of Mexican food. As you might guess from the name, it's a very mild cheese, like fresh mozzarella. Pretty good, but it kind of disappears into the food and you can't really taste it. Maybe that's the point.  I think I prefer the sharp cheddar, though.

Long version: The venison was three small roasts that I marinated with olive oil, apple vinegar, garlic, salt, pepper, and thyme, then seared on my griddle pan. I put the onion in the middle part of the pan where it wasn't as hot. 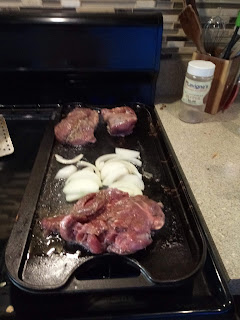 And then I took a picture. Because why not.

After the outside of the venison was nicely browned, I took it off, sliced it, then put it back on the pan. I also added diced grape tomatoes and garlic to the onions, along with some of the marinade. After all that was off the griddle, I used it to fry the bread.

I cooked the venison a little too long, so it was a bit chewy, but still tasty.

Long version: Stop the presses, because I followed a recipe. I KNOW. There's something about chicken that motivates me to search for different ways to cook it. Maybe because I don't really like it that much.

Anyway, I made this recipe using four drumsticks and four thighs. I don't know how many pounds I had, but I halved all the spices and everything and it worked out just right.

The chicken itself turned out really well--the marinade did indeed make it moist and flavorful as promised--but the reduced juices at the end were waaaay too salty. The recipe does warn that they end up salty, but the sauce was really inedible.

I was going to make baked potatoes, as the oven was on for so long, but I completely spaced on actually putting the potatoes in and only remembered about twenty minutes before dinner. Rice to the rescue!

I hated to just throw away all that juice with all those spices in it, so I put it in the rice. I forgot, however, that there was sugar in the spice mixture, and the resulting slightly sweet rice was kind of weird. I added some sour cream to mitigate the sweetness, which helped, and it was fine.

If I did this again, I wouldn't bother with the juices. The chicken itself was good, and I liked the method. I might try it with Cornell chicken next time.

Long version: When I picked up the boys from school, Jack was the proud possessor of a baby food jar of butter he had made himself in class that day. At that very moment, I had bread baking in the oven. I considered this a sign that instead of roasted potatoes with our cheeseburgers, we should have fresh bread and fresh butter.

This was a good decision.

The salad greens were almost half beet greens, because the bitter cold this week* meant that I needed to pull the beets lest the greens just freeze. So I have a lot of beet greens on hand. I actually prefer them raw in salads, though I find it best texture-wise to mix them with crunchier lettuce, like romaine or iceberg. And lucky for me, what's the only lettuce available in the nearest (20 miles away) grocery store? Iceberg. And what kind of lettuce is available in the next closest grocery store (50 miles away)? Iceberg and romaine hearts.

Long version: Didn't we just have fajitas a few days ago? Yes. Did anyone care? No. The package of fajita beef was the first one I grabbed from the freezer Wednesday night, and I thought that was a good idea because it would use up my one remaining bell pepper and then I wouldn't have leftovers. An important consideration when one is leaving for a week-long trip.

By the time you read this I'll be in a speeding box with four small children, dispensing drawing paper and snacks and answering "Are we there yet?"s with, "No. Try not to think about it."

* It got down to ten degrees on Monday night. This didn't faze the collards, but that's too much for beet greens.

And Now, To Watch the Paint Dry

Everyone, your attention, please.

Well, as much as I'm going to finish before we move into our new house by the end of the month, anyway.

I don't know how many hours I've spent total, but almost every Monday and Wednesday for the past six weeks, as soon as I put Poppy down for her afternoon nap, I would rush up to the new house, paint madly as quickly as I could, then rush home again in time to pick up the boys from school.

It was kind of stressful, actually, and also very tiring. But I knew that once we were moved in, I wouldn't regret a single bit of paint I had gotten on the walls.

I got the living room done, the dining room, Poppy's bedroom, the entryway, and the hallway. I did not paint any of the bedrooms besides Poppy's, the two bathrooms, or the kitchen, although they all could have used it.

I also didn't do as careful a job as I might have wished. I just did not have time. And in this case, done is definitely better than perfect.

I'm pretty pleased with what I did get done. Wanna see*?

Let's start with the living room, shall we? And its infamous paneling. 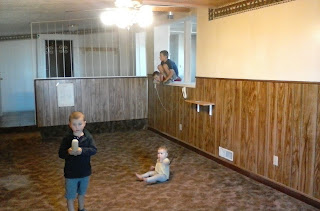 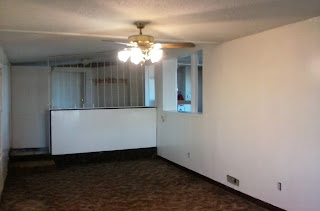 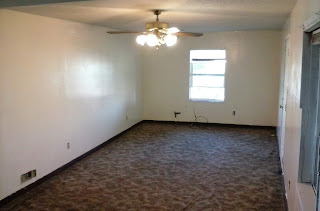 Those afters actually don't show the finished product, because I painted the brown baseboards too. Close enough to get the idea though.

Now, Poppy's room. Remember how I said the whole thing was covered floor to ceiling in paneling even uglier than the paneling in the living room? This is it. 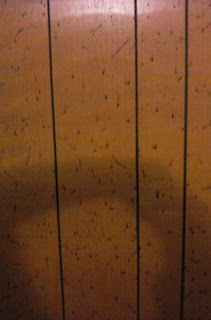 Seriously, what is up with this? It looks diseased.

I couldn't get a good after picture because there's no natural light in there and it's too dark. This was the best I got. At least you can tell the paneling has been covered up. 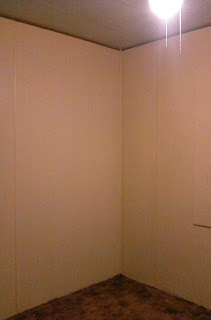 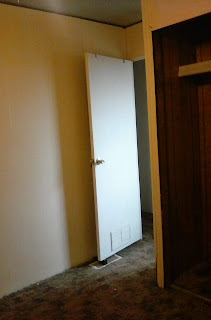 Next, the dining room. I wasn't going to bother painting this, because at least it didn't have any gross paneling in it. It did, however, have flat white paint on the walls that was covered in spots and stains. The whole house was painted in flat paint, as a matter of fact. Flat paint is impossible to clean. 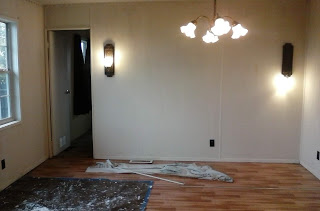 Plus, it looks, well, flat.

I don't seem to have a picture of the whole thing done, but here's the progress picture. 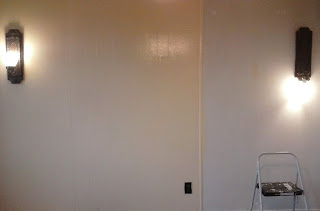 Yes, that light fixture on the right is broken. That's on A.'s (very long) list.

Last, the hallway. These walls had more flat paint, this time an odd pinkish white that just looked kind of dirty. I painted it a kind of ivory color. Though it's still a narrow hallway with nasty brown carpet. 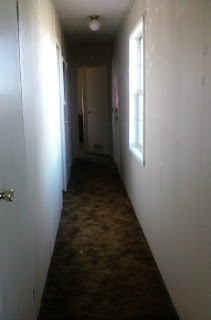 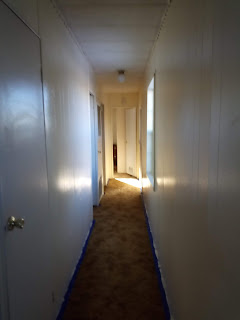 All this paint, incidentally, was custom-mixed by me. And the reason it was custom-mixed is because the former owner left behind some paint that I decided I might as well use. Unfortunately, it was a kind of ugly orangey-yellow. So I pretty much just mixed that with white paint in different combinations to make various shades of light and lighter yellow, or just mostly white with a slight yellow tint.

As I told A., it means all the room colors are very harmonious, because they're all in the same color family. Sounds legit, right?

Of course, it also means that I can never touch anything up without painting everything all over again, because I'll never to be able to match the current random colors.

The painting is done. For now. There may be some more at some point--like those bathrooms, or maybe Cubby's room--and probably also some brown carpet remediation, but for now, I'm calling it quits so we can work on actually getting moved in by December 1. Wish me luck.

* I spent a minute trying to get the before and after pictures side-by-side before giving up and figuring you can get the picture (ha) as is.