Something You Didn't Know

I used to write poetry.  It was, admittedly, quite awful poetry, but I was reminded of it when I saw this by Christine.  And then, sitting and holding Charlie (not coincidentally), the following was just . . . there.  In my head.  And now it's here.

Holding a baby
Sticky from entry

Holding a boy
Crying in fear

Holding a boy
Screaming and kicking

A boy holding tight
to my legs for safety

A baby holding my finger
The instinctive grip of survival

Holding until they let go
And then I will be left
Holding only the memories
Of holding
Posted by Kristin @ Going Country at 8:59 AM 6 comments:

It All Started with a Clogged Drain

This afternoon when I was cleaning the upstairs bathroom, the sink stopped draining.  I asked A. to go to the hardware store in the village and get some drain unclogging stuff.  He did.  Then he poured it down the wrong sink upstairs.

I told him we needed more because the sink in our bathroom was totally unusable.  He didn't really want to go back to the village to get it, but when I suggested perhaps we could make it a family outing, he was all for it.

So we went fishing.  There's a dock at the village park where A. and Cubby go to catch pan fish.  I didn't really want to go, but since Cubby has a cold and has been a little, ahem, delicate of temper, I thought it would be prudent to tag along and forestall the whining for Mommy that would be certain to occur if I wasn't present.

When we got to the village, I remarked to A. that before we left I wanted to go the wine store to get a bottle of my favorite wine (a Vidal Blanc made by a local winery).  Then he decided that since it was 4 p.m., he would get a can of beer.  And he got me my wine. I wasn't actually planning on drinking any of it right then, but, well, he got the chilled bottle. And I was sitting in the sun on a blanket in the grass.  Of course I had to have some.  We didn't have a corkscrew, but it didn't matter, for we are woodchucks and ingenuity is ever our watchword.

Woodchuck instructions for wine opening: Push the cork right into the bottle with a pair of rusty pliers.  Then, to get the cork out of the way so it doesn't keep floating at the top and getting lodged in the neck of the bottle, thereby preventing the wine from coming out, find a long stick and push the cork down far enough so it's in the wider part, where it will flip sideways and stay that way.  Now you can drink straight from the bottle, because if you don't have a corkscrew, you probably don't have wine glasses.

This is how I found myself sitting on a blanket in the park with a baby this afternoon swigging wine straight from the bottle.  It was way classy.  And I bet it resulted in great clucking and head shaking among the two elderly couples walking their yippee little dog in the park.

It's pretty nice, though.  Just remember that if you're drinking straight from the bottle, you have to be very careful to watch your intake.  Especially if your current job duties include producing milk for a small person.

Incidentally, it turned out that on A.'s first trip to the hardware store, he bought the only bottle of drain unclogger they had (it's a really, really small hardware store), rendering the trip for a second bottle useless.  So it's a good thing we had another reason for going to the village.
Posted by Kristin @ Going Country at 6:39 PM 13 comments:

Labels: all about me, family, the A team

Isn't it funny how people start predicting a child's career before that child can even successfully use a toilet by himself?  For awhile, A. thought Cubby should be a sailor, although lately he's leaning towards astronaut.  Many people have said Cubby will be an engineer when he's all grown up, based on his unnatural affinity for tools.  Personally, I think he should be a host for a home improvement show.

He already evidences all the necessary traits.  Freaky obsession with tools?  Yup.  Incredible physical attractiveness?  Yup.  Continuous and occasionally irritating stream of patter explaining his every action to the poor schlub who obviously doesn't know a monkey wrench from an allen wrench (that's usually me at this stage of his life)? Definitely.  The kid's obviously got a calling.

Allow me to present Tool Time with Cubby.  Episode One: Replacing Rotted Siding. 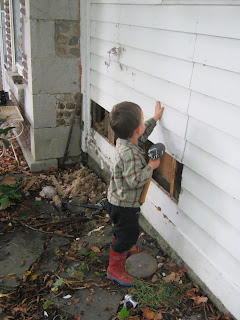 You can see the siding on this board addition circa 1923 has been sadly rotted out by moisture.  Two boards have been removed (revealing some really nice mouse nests underneath WHEE!).  It's important to check the remaining boards for soundness by pressing on them with your hand. 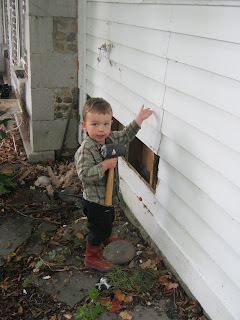 This particular board has been deemed sound and will remain.  As Cubby will explain very earnestly. 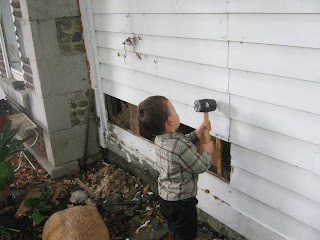 But it's always good to make doubly sure by pounding it with a rubber mallet.  Since that's the only tool his lame Mommy will let him play with.  When he's big, he's going to use the power drill and you can't stop him.

I really should get a video camera.  I could totally film a pilot episode now.

An anonymous someone mentioned yesterday that there never seem to be any photos of me with my children posted here.  There's a simple reason for this:  There aren't any.  And that is because I am always with them and I am also the only one who takes pictures.  A. is not prone to snapping photos of tender moments.  Or any moments, really.  Neither is the MiL.

But!  When my parents were here, the MiL did grab the camera handily sitting on the table to take these pictures of me with my children and my mom.  They're not the best quality, but they are literally all I got. 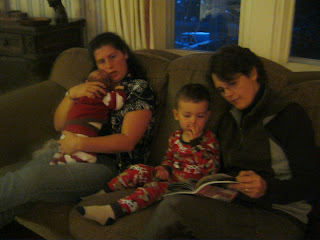 We're reading a field guide to amphibians.   What?  You thought it would be something cute like Goodnight Moon?  Perish the thought. 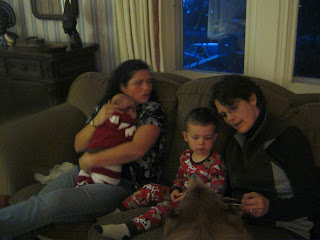 Did you know there's a salamander called an amphiuma that can grow to almost four feet and is known to bite?  Neither did I, but I do now! Thankfully, it only lives in the southeastern United States, so it will never show up in my living room.
Posted by Kristin @ Going Country at 3:30 AM 8 comments:

Labels: all about me, Charlie, Cubby, family

By 11:30 yesterday morning, Cubby was down for his nap, Charlie was asleep, and A. was just waking up from his antihistamine-induced coma.  Without hives, thankfully.  Cubby woke up from his nap a little too early, and neither A. nor I was looking forward to a rainy afternoon trapped in the house with our two bedevilers.  So when A. offered to take Cubby into the Small City for a late lunch at the Chinese buffet, I actually said Charlie and I would go too.

I don't really like buffets, since quality takes a definite backseat to quantity.  But I was not about to stay at home with the baby and have to find something for dinner.  So I packed a still-sleeping Charlie into the car and away to the buffet we went.

A. and Cubby love the buffet.  A. because he can eat insane amounts of protein for a low price, and Cubby because of the variety.  Crab!  Shrimp!  Chicken!  Broccoli!  Green beans!  Potatoes!  Sushi rolls!  Plus pudding AND Jell-O AND a cookie!

It's pretty much Cubby's idea of food heaven.

Charlie slept the whole time, so even though I wasn't too enthused about the food, I was VERY enthused about getting to eat ANY food without dealing with a baby.

Then, since we were on a roll with the happy times, we went to our local Huge Outdoor Store so Cubby could look at fish and guns and all kinds of fun outdoor stuff.  And then we went into the attached mall, where he raced around like a maniac and played around the arcade.

So it was good.  We'll end on the positive note here, and just ignore the dead sheep A. had to dispose of before we left and the fact that when we got home we were out of water and A. had to spend an hour in the driving rain fixing the water pump.  Forget all that.  Yesterday was okay after all. 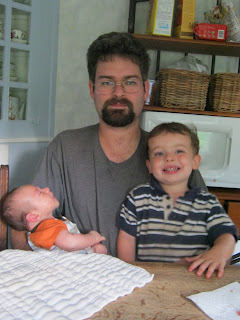 This is a photo from a few weeks ago, but whatever. Besides a larger baby and more layers, not much has changed.
Posted by Kristin @ Going Country at 6:59 AM 4 comments:

In ten years, I might say this to A.:

"Hey, remember that Sunday morning when Cubby was two and a half and Charlie was two months and Cubby wet his bed and came in our room at five a.m.?  And you got up to get him dressed and he screamed like he was being scalped the whole time?  And then you saw you had hives, probably from a spider bite you got the morning before, and so you took a double dose of antihistamines and went back to bed while I stripped Cubby's bed and brought him downstairs?  And then you brought a crying and hungry Charlie to me  half an hour later and for the next six hours, one or the other of the kids was crying?  And it was raining so we couldn't go outside?  And then Cubby peed his pants while he was standing in front of his toy box and half the puddle went under the toy box and I had to lift the extremely heavy full toy box to mop it all up?  Remember that morning?  Boy, wasn't that FUNNY?"