This week's Friday Family Fun featured the MiL and Rafael, who stood in for me and Poppy on an adventure into the canyon.

A. had called Rafael to see if he needed help harvesting the rest of his vegetables before the hard freeze that's supposed to hit on Sunday night. The result was everyone but me and Poppy going to Rafael's ranch in the canyon. Including the MiL, who arrived on Thursday night from Tucson for a few days.

Poppy and I didn't go because there was some concern that the road would have too much water on it from recent rains and there might be some hiking necessary if anyone got stuck. For this reason, Rafael drove his truck and A. followed in our Honda. Rafael almost got stuck in mud at one point, but everyone made it out in the end.

Anyway. I wasn't there, obviously, but the MiL kindly took some pictures for me.

There are, of course, cows on the ranch. 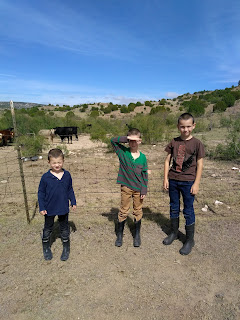 There are chickens, too, but I don't have a picture of them.

Because I am well-accustomed to what adventures with A. are like (that is, long and remote), I made sure to quickly throw together some picnic food for him to bring with him for the boys. Cheese, crackers, and nuts and raisins go a long way in making for a fun day without whiny kids. 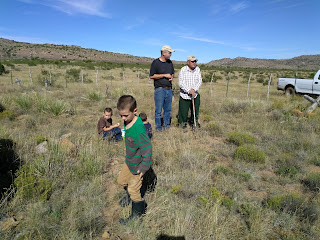 No picnic tables to be seen. Squatting picnics are common for us.

Rafael gave A. one of his precious calabazas, too. Not a calabacita, which are the immature ones eaten like zucchini, but the mature calabaza. Unfortunately, I didn't get a picture of it before A. brought it to our new house for curing, but it is indeed quite large. About the size of a volleyball. Also kind of warty. Apparently, we can cook it like a winter squash after it's cured.

I'll let you know what it tastes like when I do. Stay tuned for that excitement.

The whole trip was about five hours. Poppy and I had lots of time to bond while they were exploring the ranch. This week we'll go back to our regularly scheduled Family Fun with Mommy and Baby, but I can't say I was disappointed to have half a day in a quiet house with just a baby for company.


Wanna see what we ate this week? Oh good! Because I'm gonna show you.

Long version: The MiL arrived Thursday night with a bag of tomatoes. Less than twelve hours later, I put several of them on a pan with a head of garlic and made Finny's sauce. 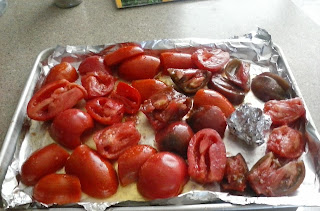 I almost went a whole year without making a batch of this. Horrors.

In addition to being The Best Tomato Sauce Ever for pasta and meatballs, it is also The Best Pizza Sauce Ever. And I already had the sourdough going for pizza on Friday. So serendipitous.

I made one pizza with chorizo and onions; the other was just cheese. Both were delicious.

Long version: When we went up to the new house on Friday with the MiL, Cubby asked to bring his .22 for target practice. A. told him he could, and when A. was setting up a target by the woodpile for Cubby, a rabbit ran out.

And so I had a rabbit to cook. Rabbit is best when it's stewed for awhile, and I didn't have time to do that on Friday or Saturday. Sunday was the day.

I thought it would be appropriate to make cacciatore--which means "hunter" in Italian--with it. Plus, I had some of Finny's sauce left over for pasta.

My master plan is for A. to teach the kids how to hunt, then I can teach them how to cook, and they can take care of everything. I'm trying to work myself out of a job, you see. Thus, I had Cubby help me make the coniglio cacciatore. (We filled the rest of the pan with pollo--chicken--because one cottontail does not feed six people.) 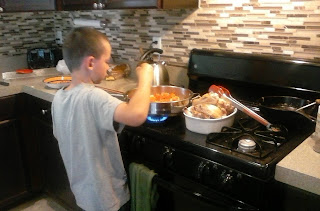 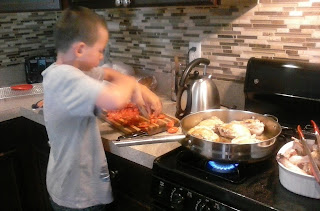 His hands were not actually moving so fast that they blurred while he was chopping. I just have a
crappy phone camera.

I didn't actually follow a recipe. Do I ever? Instead we just browned the meat, cooked onions, garlic, and diced tomatoes, added dry vermouth, chicken stock, and a few spoonfuls of Finny's sauce, then put the meat back in to simmer until it was tender. The rabbit didn't get particularly tender, but the kids didn't care. They enjoy tearing resistant meat off the bone.

Of course, since Cubby was helping me in the kitchen, Charlie and Jack must do likewise. Charlie peeled two carrots for me. Jack helped me slice zucchini. I don't have a photo of that, as my hands were busy trying to keep him from slicing off the tip of his finger.

Long version: Cubby came home early from school with a general malaise that manifested in a headache and upset stomach. He was feeling better by dinnertime and told me he was hungry. So I made him some soup with chicken stock and leftover chicken, cooked carrots, and rice.

The ability to make Spontaneous Soup is a small talent, but very useful.

Long version: Man, that was some good feta. It's made at the cheese factory where I got all that cheddar cheese a couple of weeks ago. I will definitely be getting more of that next time I'm there.

The MiL brought me the celeriac and squash. She grew the celeriac herself. The squash looked like butternut, but the skin was much darker, so I don't know exactly what it was. Cubby actually liked it, though. Cubby and Charlie have historically been very anti-squash, though I continue to give them some to try every fall. Victory.

I also gave each boy a piece of celeriac to try. Both Cubby and Charlie asked for more. That's more than a victory; that's a miracle. Guess I'll have to grow celeriac next year.

Long version: This was not at all my plan for dinner. I had planned on making a beef stir fry. I had the beef marinating and everything. Unfortunately, my hand and arm were so sore after all my sanding, cleaning, and painting at the new house--and I was so tired--that I just didn't have the physical ability to do all that chopping. I didn't have the mental fortitude either.

In such cases, scrambled eggs save the day.

The collard greens were from our very own garden. 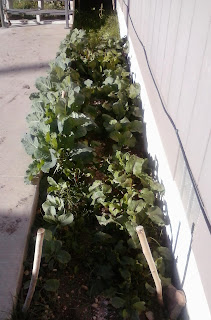 It's looking much more impressive than the last time I showed it to you. Three cheers for A.

I just cooked them in olive oil with a lot of garlic. And I cooked them for at least half an hour until they were soft, because I do not enjoy tough greens. They were delicious.

I don't habitually buy mini anything, but the mini bell peppers were the only non-green ones at the tiny grocery store. And I don't do green peppers. The kids were very pleased with them.

Long version: Stir fry really takes far too long, what with all the chopping and separate cooking of the individual components and all. It sure is good, though.

This time I used a piece of the fajita beef, marinated in soy sauce, vinegar, ginger, and garlic powder and sliced very thin. The vegetables were onions, carrots, broccoli, and bell peppers, and I used the same marinade with some cornstarch added to make the sauce.

I had a little meat left that wouldn't fit in the pan when I made hamburgers two days previously, so I fried those for Charlie, who does not enjoy stir fry.

There was some leftover rice, and some leftover potatoes, but not enough of either for everyone, so A. and Charlie had potatoes and the rest of us had rice. Stir fry with mashed potatoes is a little odd, but A. didn't seem to mind. More filling probably than the rice, anyway.


Hey, you know what a one-year-old thinks is hilarious? The sound of sandpaper on a wall. I know this because Poppy has been accompanying me to the new house while her brothers are at school, and watching my attempts to make it less ugly.

"Less ugly" is my design aesthetic, incidentally. Somehow I doubt I'm going to score my own show on HGTV (is that the right one? I don't have a TV so I have no idea) with all my careful improvements to our added-on-to trailer.

On the upside, this is the best house for an impatient person like me to be working on. It was so bad to start with, anything I do will make it look better. Also, I don't care if my children totally destroy it, which they probably will. Sort of the same idea of driving an old beater car so you don't care if someone sideswipes you.

So far I've gotten the walls in the living room spackled, the spackle sanded, and the walls wiped down in preparation for painting. Poppy assisted me in these jobs by trying to stick her fingers in the exposed electrical outlets, pulling the step stool down on herself while I was getting a clean cloth, and breaking my sunglasses.

I got most of the living room ceiling painted today during one of her naps. It was this nasty dark brown that could best be described as "excrement colored." It really needed painting. After I did all I could while she was crawling around, I came home to drop her off * before going back to the new house to paint the ceiling, because there are some things you just don't do with a baby present. Painting a ceiling is definitely one of them.

A. has to do the rest of the ceiling for me, because I couldn't reach. And then I can paint the walls. 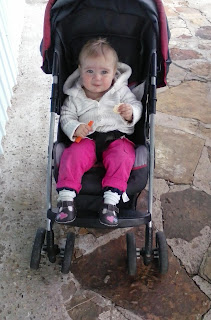 This one is not invited for that, either.

It's slow going getting anything done working around a baby and three other kids, but I'm getting there.

* Obviously, A. was home. I didn't just leave the baby sleeping and then drive ten miles away.