This Is Getting Monotonous

Here I sit yet again, glowing attractively with sweat and eating a large bowl of White Lightning ice cream in a vain attempt to keep cool.

I saw the doctor yesterday for my now-once-a-week check to see if there's a baby planning on arriving anytime soon.  The doctor made small talk in the form of informing me much too cheerily that record heat was forecast for today.  Then he told me that second babies are on average born four days after their anticipated due date.

Is there a jury in the world that would send me to jail for smacking that guy right in the face for saying such things to a woman who is quite obviously DONEDONEDONE with the pregnancy-in-summer thing and just looking for any small sign of hope that this child will arrive sometime before I spontaneously combust from a combination of heat and pregnancy-related discomfort?  No female jury would, anyway.  In fact, they might add a couple of whacks for me.

Labels: all about me, baby stuff, randomness, weather

We celebrate in our own particular way here at Blackrock. 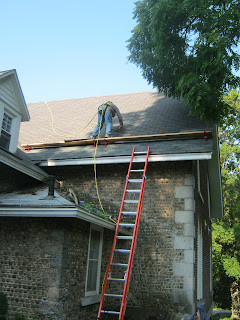 A. is going to be really, really glad when this roof is done.  So will I.  TERRIFYING. 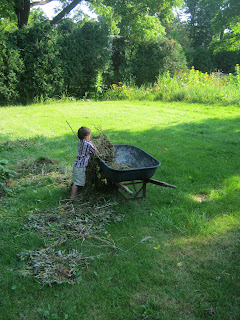 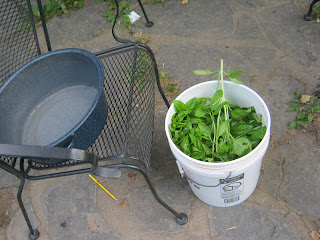 While I was picking the leaves off the basil branches, Cubby entertained himself by planting the stripped branches to make a basil forest. 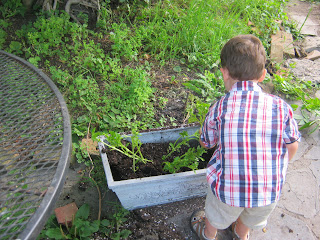 Good to put this planter to use for something besides weeds.

And then, of course, we had to go inside to dump all that basil in the food processor with walnuts and olive oil and garlic, and then eat it.  Because it wouldn't be fair to make Cubby sit through all the making of the pesto and then not get to eat it.  He does love his pasta with pesto.

Know who doesn't love pasta with pesto?  A.  He finished his roofing (well, not finished, but quit for the day anyway) around 11 a.m.*  He saw the pesto and, as he told me later, knew immediately that his secret hopes for a big Fourth of July barbecue blowout were to be dashed.

Damn straight.  I want a holiday too, sometimes.  And I really do not enjoy standing over hot coals when it's 92 degrees outside.  I was planning on copping out with hot dogs.  So A. took matters into his own hands.  Thirty minutes later, I went out to look for eggs in the shed and walked right in on A. butchering a lamb hanging from the shed roof.  Why not, right?  All that meat right out there in the pasture and all, just waiting to be put on the grill.

Except first it had to be slaughtered and butchered.  So he did that.  The lamb ended up being 20 pounds dressed weight (that is, after gutting and skinning), so it didn't take long.  And it was small enough that he just cut it in half lengthwise and put it in our chest freezer to cool down.

Then he had to build a grill big enough to hold half the lamb.  So he did that.  Random fire bricks and big grate that mysteriously appeared on our beach?  Check.

The grilling of the lamb was sort of disturbing, since it looked exactly like, uh, a skinned animal lying on a big-ass grill: 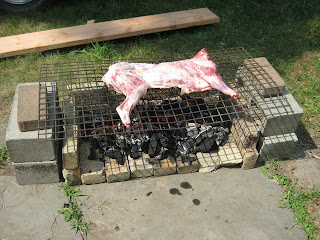 Tasted good, though, and A. was overjoyed that he got to glut himself on grilled meat as an appropriate celebration of This Great Nation.  I was overjoyed that I didn't have to cook except for cutting up some peppers and onions for him to put on the grill with the lamb.  It all worked out.

Then we took Cubby down to the blisteringly hot beach, where I convinced A. to give him his bath in the lake so when we went back up to the house, all I had to do was get him into bed and then I could plant myself in front of the fan in the living room with an enormous slice of watermelon because HOT HOT HOT, MUCH TOO HOT.

And that's the Fourth of July, Blackrock-style.


*  I think one of the definitions of crazy may be spending five hours on a roof on one of the hottest days of the year.  And if that's a definition, I married a crazy, crazy man.  Useful, though.
Posted by Kristin @ Going Country at 4:34 AM 5 comments:

It is currently 6:30 a.m. and A. is balanced precariously on a ladder, beginning phase 2 of the roofing.  Cubby, shockingly, did not demand to go out and throw a fit at the base of the ladder when I refused to allow him to climb it.  Instead, while I was finding the small portable radio to motivate A. with patriotic country music (currently: "Riding with Private Malone"--a gem of a song about buying a car haunted by the ghost of a young, dead soldier), Cubby decided it would be an excellent time to view some quality television.  Apparently, at 6:30 in the morning PBS shows the new version of "The Electric Company."  The theme song is a rap song.  Not much as I remember it from my own childhood, but whatever.  Could be worse.

A. considered taking the whole family fishing this morning instead of roofing, but he has this fear that the motor will quit in the middle of the lake and I'll go into labor.  Since I never really want to go fishing, I did nothing to try to assuage his (admittedly far-fetched) fears on this subject.

So here we are.  Child care, hard labor . . . just another day at Blackrock.

Edited to add:  Did I say there might be something worse than the new "The Electric Company"?  I think that was mistaken.  About two minutes after I published this, Cubby came in to request that I sit and watch with him.  So I did.  For about thirty seconds, at which point I said, "Wow, this is really bad.  You think we should turn this off?"  And he did, while repeating, "This is really bad."  Maybe it was that bad when I was young too and I just don't remember, but it certainly is terrible now.  It was so bad that I preferred standing around outside supervising Cubby "sweeping" the steps and pushing the lawn mower to sitting in a chair and watching that dreck.  If it's so bad I don't want to sit in a chair, you know it's really bad.
Posted by Kristin @ Going Country at 4:42 AM 2 comments:

In lieu of anything remotely resembling a story with a narrative and a point and all that other hard stuff, how about a random collection of things from today.  Yes?  Great.  You're my kind of people.

1)  This morning as I trudged wearily towards the kitchen at 5:15 in search of coffee, I happened to glance out the dining room window towards the paddock and saw . . . what the hell is that?  Is that a sheep?  With a water bucket on its head?  Yes indeed.  I briefly considered going out there and getting the bucket off myself before deciding the hell with that and waking A. up to go chase his own sheep around and save them from their own stupidity.  It was the ram with the bucket on his head, incidentally.  Which makes me consider that possibly our future lambs are not getting the best genetics when it comes to intelligence.  And that's saying something in regards to sheep.

2)  Thanks to that early rousting from bed that resulted in an early start in his office this morning, A. finished up with his work mid-afternoon today.  So of course I put him right back to work digging up the garlic.  I could have done it myself, but once again decided the hell with that and enlisted A.  I'm getting to be a real pain in the ass lately.  The garlic looks pretty good actually, despite an invasion by some very pushy volunteer potato plants and the overshadowing of the asparagus trees that always get way bigger than I remember them being.  So if nothing else, we'll have lots of garlic this winter.  That's something, anyway.

3)  We had our chimney cleaned and inspected today.  All the official recommendations for this stress that it be done EVERY YEAR or certain conflagration will ensue.  I think we last had it done at least two years ago, possibly three.  But the official recommendations don't really apply to us as our woodstove was actually listed as "unclassified" by the inspector--which translates to "HOW old is this thing again?"--and burns way hotter than modern stoves.  Which means virtually no creosote build-up.  Good to know.

4)  I would be quite happy to never hear the word "no" from the beautiful mouth of my son ever again.  Particularly in a long, loud, strung-together manner that transcribes thusly: "NONONONONONONONONONONONOOOOOOOOO."  This is the response I got today for questions involving the potty, eating lunch, going outside, drinking water, checking for eggs in the shed, the advisability of touching Daddy's chainsaw, and too many other things to mention.  I was also informed loudly and at length that he did not want Mommy to eat anything this morning.  He has yet to learn that I don't take orders from a two year old.  Maybe earplugs would be a good idea.

5)  We were also treated to a ten-minute monologue by this same child regarding his stuffed lambie.  He was actually talking to the lambie, asking what was the matter, pretending to give it milk from a bottle and put it to bed.  This gives me hope that someday I might actually end up with a compassionate, fully rational individual as my offspring instead of a demanding narcissist.  Unfortunately, that day was not today, nor will it be tomorrow.  But someday.

A. and I went into the Small City yesterday for a few hours to run some very boring errands.  We left Cubby at home with Grandma.  When we got home, I found this: 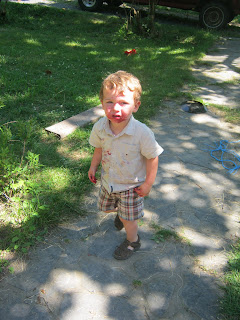 At least we know he was well-fed.

Nice to know someone is enjoying the mulberries, anyway.

He has also been very busy fixing Daddy's truck: 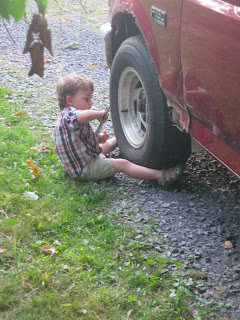 Too bad the problem is actually with the transmission, not the tire.

Meanwhile, Daddy has been enjoying the view from the roof: 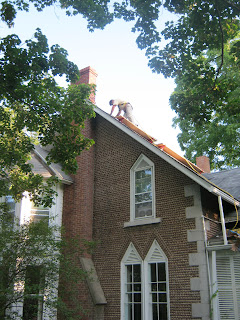 Okay, maybe not so much "enjoying the view" as "sweating his life force out in the sun and trying not to fall off the roof."  Same thing.

And what have I been doing?  Watching my feet and ankles swell.  Yes, I have become a hobbling cliche of a massively pregnant woman in the summer.  I did not take pictures of that, however.  You are welcome.

The only way to avoid the swelling is to put my feet up.  Guess how often that happens in the course of a day.  Right.  Pretty much not.  Ever.

No matter, though.  Today is July 1.  We'll have a baby this month, one way or another.  And then my feet can get back to normal while the rest of me falls apart.
Posted by Kristin @ Going Country at 5:45 PM 5 comments: