And I Didn't Even Blink

I was outside with all three boys this morning when Cubby called me to the front porch, announcing, "You HAVE to see this."

That's how I knew it would be something I probably wouldn't actually want to see, but I went anyway.

It was a dead grackle. Yup, could've happily skipped that one.

I could tell from the fact that the grackle was directly under the parlor window that it had flown into the window. I was almost certain it was dead, although I did have a momentary flash of horror as Cubby bent to pick it up that it might have just knocked itself out and would come back to consciousness right there in Cubby's hands, at which point I'm pretty sure I would have had a stroke.

It didn't, though. It was very dead, with a broken neck. And I know it was broken, because Cubby spent several minutes in a minute examination of the deceased bird, pulling out its wings, feeling its beak, touching its creepy sharp talons, and all the while its head was flopping grotesquely about on its broken neck.

I assume he meant sad that it was dead, because the grackle was quite clearly beyond any emotion.

Cubby then danced the grackle about on the porch railing, singing an original song with the refrain of, "I'm the beautifullest gracklegracklegrackle, graaaa-CULL!"

And then Charlie had to have a turn, of course.

Some of you may be wondering how I could have let my sons play with a dead bird. Well, it's not the first time, you may remember. And I did insist that they could only play with it this afternoon, at which point we would bury it in the gully because it would start to rot. I also insisted they wash their hands thoroughly when they were done with it. See? Totally responsible!

In the end, I suppose I just didn't care that much if they were playing with a dead bird because, well . . . this is our life. And this is the sort of thing they do. Country boys gonna be country, and nothing I can do will change that.
Posted by Kristin @ Going Country at 1:14 PM 2 comments:


Well, in that case, you'd best go somewhere else.

But! If you want to celebrate Cinco de Mayo Blackrock-style, post-three-kids . . . well then. Look no further. 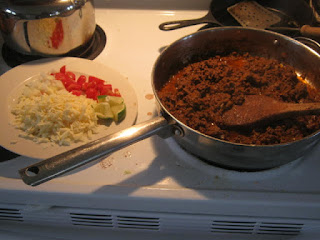 Taco meat with a toppings consisting of cheese, onions, tomatoes, and lime? Festive!*

It's kind of dumb that I insist on celebrating (in the loosest and lamest sense) Cinco de Mayo, considering I have zero Mexican ancestry. But then again, I'm only nominally southern, and I'm pretty stubborn about the New Year's Day health, wealth, and happiness, so what the hell. We take our traditions where we can find them.

* Plus gin and lime, even though it's not Friday. Wild. Should've been tequila, but, well, I didn't have any and I don't really like tequila, so there you are.

Posted by Kristin @ Going Country at 3:42 PM No comments:


I've had an on again/off again relationship with running my whole life. I've been firmly in the "off" setting for the past six years, however. I just couldn't figure out the logistics of running while also being pregnant/nursing/on constant call for one, then two, and now three children.

Also, if I'm to be honest, I just didn't really want to run.

But then I did.

Last week when we took the kids to the playground at the local school, I ran around the extensive athletic fields. It was surprisingly easy. Then again, it was also only about a mile and, more importantly, on the grass.

I didn't realize that the grass was a key component until I tried running on the road this past weekend. As soon as my feet hit the blacktop of the main road, I could feel the jolts running up through my body from the unyielding surface. And then my wretched foot started to hurt.

I thought it would be okay, though, because I only run on the main road for a few hundred yards before I turn onto the small road leading away from the lake. When I ran it regularly six years ago, that road was gravel.

Alas, I am doomed by progress. That road has been paved.

I walked part of the way just because I didn't want to cripple myself by striking hard on pavement with my weak feet.

Okay. Now what? I can't run regularly on a paved road without crippling myself. I can't be getting in my car to run at the athletic fields. I have a very limited amount of time for this fitness crap, you know. I'm already getting up at 5:30 a.m. so I can be done and showered in time for my child care duties to commence at 6:30.

That left running from the house up to the Plantation.

I had some reservations about this. It's a very steep incline running up there. But then an easy downhill run to come back, which is nice. Also, it's wet. Really, really wet. High grass in our pasture to start, then unmowed grass in the neighbor's field, all trapping every drop of moisture. It rained all day yesterday, and by the time I got to the neighbor's field this morning, my feet were so wet I was squishing with every step.

It was 39 degrees. That's some cold, sock-saturating water, right there. I was really questioning my motivation for doing this at about that point.

That was the worst part, though. By the time I got through the fields I was mostly awake (5:30 a.m., remember?), and the path through the woods was relatively dry, though muddy in parts. I had to stop once to break off a hanging limb that was in my way, and I had to do a small hurdle over a fallen tree, which was actually kind of fun.

I scared off three deer and heard some wild turkeys gobbling in the gully as I ran. There was no loud traffic, no chance of being hit by a large truck, and no hard pavement.

So I guess I'll be a trail runner now. Let's just hope I never meet a coyote up there.