Long version: The day before, I had made the children bacon sandwiches for breakfast, and they inexplicably did not really eat them. I have no idea why. I mean, BACON SANDWICHES, HELLO.

I cut up the remaining toasted bread, doused it with olive oil, salt, and garlic powder, and shoved it in the oven while it was on to cook some old pumpkins for the livestock. Result: croutons. Yum.

The remaining bacon was used in the potato cakes, which I made with leftover mashed potatoes, the diced bacon, a bit of flour, an egg, and some grated cheese. Half of the children loved them; half did not. A pretty standard reception to a new food.

Long version: "Elk bites" is chunks of elk marinated in olive oil, vinegar, salt, pepper, and garlic, then seared and served with ketchup for dipping. Boring, but serviceable.

Long version: I have a confession to make: I dislike whole chickens. I dislike cooking them; I dislike cutting them up; I even dislike eating them.

I buy them sometimes anyway, though, just as a break from red meat and because they're cheap.

So then I had this chicken to roast, and it was HUUGE. Like, Charlie came in the kitchen while I was prepping it and asked, "Is that a turkey?"

It was so big that I had to cut it up after a couple of hours in the oven just so it would actually get cooked in time for us to eat. I cut off the legs, then sliced the breast through in a few places without actually cutting it off.

I seasoned it with lemon and garlic inside, and melted butter and lemon on the outside (plus salt and pepper, of course), and then made a quick sauce with the pan juices, Dijon mustard, and heavy cream. It came out pretty well in the end. And we had quite a bit left over, because eight pounds, remember?

It was incredibly warm this day, so A. deputized the children to continue the stone wall he's building around the backyard garden. 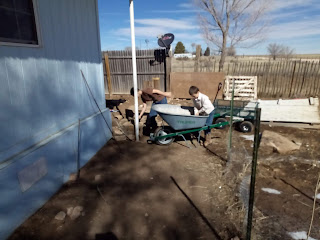 Long version: Surprisingly tasty, if not gourmet. Does the job for a work night, anyway.

Some day I'm going to have fresh vegetables from the garden again. At the moment, most of the infant fresh vegetables are living in the children's bathroom in the upgraded grow box A. put together for me. 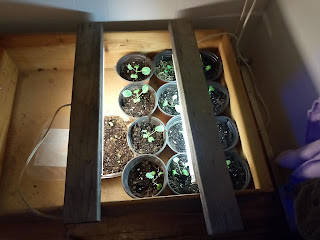 Same lights, but we switched out the busted laundry basket for a discarded drawer from the children's bunk bed. Roomier, and more aesthetically pleasing. My grandfather, who made that bunk bed and these drawers, would be pleased with the newest incarnation of his woodworking, I'm sure.

The lettuce and arugula are still alive outside, if tiny. Hooray! And while they grow, there are frozen peas.

Short version: Chicken quesadillas for the children, soup for me, pinto beans and frozen green beans for all

Long version: Miss Amelia called on Tuesday to let us know she had some pinto beans for us. When A. went to get them, he returned with a box that contained two jars of beans, a package of flour tortillas, some slices of American cheese, a small container of honey, a stick of butter, and a single serving of soup.

Thanks to Miss Amelia's box, I was able to make very exciting flour tortilla quesadillas for the children. I never buy flour tortillas, so this was a big treat. I shredded the last of the leftover chicken and heated it with salsa and garlic powder before putting it in the tortillas with cheese--cheddar for Charlie, who does not like American cheese, and American cheese for the rest.

I think the soup was ham, chicken, and potato with green chili. I wasn't sure about the ingredients, but it sure did taste good. And it was very nice to come home from a challenging day of work and eat some soup that I did not have to make.

Long version: I forgot I had already prepped some elk steaks from the piece of elk I was using for the pizza elk on Tuesday. Very efficient of me, but not very useful had I completely forgotten they were sitting in the refrigerator.

They were just pieces that I pounded thinner with the rolling pin, then seasoned with salt, pepper, and garlic powder, and paprika and fried. The children ate theirs with ketchup. I ate mine with barbecue sauce.

I didn't have any sauce for the leftover pasta, so I just heated it in the microwave with butter, cream cheese, garlic powder, and a little cream. Cream cheese with pasta is way better than it has any right to be.

I cooked most of the cabbage in a pan with onions and carrots. But Charlie and Jack ate their cabbage raw. Weirdos.


Poppy and I were having her required wake-up cuddle early (very early) one morning, when she spontaneously gave me a very sweet kiss on the cheek. 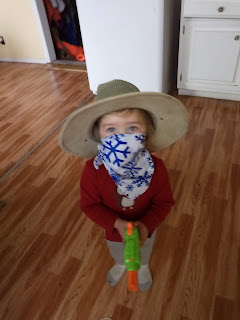 Further on the Fringe


About three years ago, I mostly stopped using laundry detergent when I washed our clothes. I noted at the time that this was hardly a mainstream approach to laundry, but I also noted that I didn't care. The word I used was "fringe."

And now the fringe continues to unravel, you might say.

About two months ago, our dryer broke. A. fixed it briefly before it broke for good. Instead of buying a new dryer right away, A. built a winter clothesline for me in the pasture, where the clothes get sun and wind. That is not the case with the clothesline in the fenced-in backyard, which is great during the windy season or in the summer, but not very useful in the winter. So the new clothesline does get clothes dry here in New Mexico even in the winter, except for on days when it's actually raining or snowing. 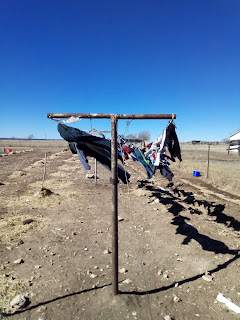 Yet another glamour shot of a clothesline on this blog. There can never be too many.

At about the same time, our washing machine ceased to actually clean our clothes, instead depositing visible dirt on clothes that hadn't really been that dirty to start with. It was clear there was significant filth in the innards of the machine somewhere.

Eventually, A. took the whole thing apart so we could clean it. He needed a special part to get the drum all the way apart, which we ordered.  But the part didn't come for almost a week, during which time both our broken dryer and pulled-apart washing machine were sitting out in front of our house on the patio. A lovely home decor statement right by our door.

During this period, we were doing laundry in the bathtub again.

A. did manage to get the whole washing machine back together again, and it worked for two loads before it refused to drain water out of the drum.

A. was so sick of dealing with laundry machines at this point that he declared he would rather do laundry in the bathtub indefinitely than buy another machine.

I disagreed. Strenuously. I told him I was willing to live without a dryer, but definitely not without a washing machine.

I found a place in a small city 90 miles away that sells refurbished appliances and called them to make sure they had some washing machines. It took another week of tub laundering before we were able to make it in to the city to buy a machine, but we did eventually.

They actually had sets of both washers and dryers, but I told A. not to bother getting the dryer. After two months without one, I realized I really don't need one here. I mean, sure, it's sometimes a pain to be rushing laundry out first thing to make sure it gets dry, and hanging clothes on the line when it's still below freezing is no fun, and sometimes the dirty clothes pile up a bit if we have a couple of days of inclement weather, but generally? Nope, don't need a dryer here.

So now in addition to not using laundry detergent, I don't use or even own a clothes dryer. Fringe, for sure. But still okay with it.

Labels: all about me, domesticity, randomness, the A team
Newer Posts Older Posts Home
Subscribe to: Posts (Atom)