The other day when I was downstairs with Charlie, I heard the thumping upstairs that indicated Cubby was done with his nap and emerging from his room.  When the thumps did not descend the stairs, I went upstairs in search of the thumper.

I found him in our bedroom, applying deodorant to his forehead.  He explained he was putting Daddy's deodorant on because he smelled like peanut butter and jelly.

He also told me that same day that it didn't matter what I said, he was going to press on Charlie's head. This was after, of course, I had told him not to do that and he had said yes I will and I had said no you won't.  And he said YES, I WILL.  And I said NO, YOU WON'T OR YOU WILL BE IN BIG TROUBLE.

All caps and italics included in this conversation.

After the pronouncement that it didn't matter what I said, he was going to do it anyway, I said something brilliant like, "OH YES IT MATTERS; IF I TELL YOU NOT TO DO SOMETHING YOU WILL NOT DO IT" (all caps again).  And then I hauled him into the other room for a time out.

Oh, the hilarious and infuriating things kids say.  A laugh a minute, this parenting gig.  About a minute all day, that is.

* It kind of does, because we explained that deodorant is used by adults so they don't smell bad.  I don't think most people would rank peanut butter and jelly up there with B.O. on the Stink Scale, but whatever.

Chillin' on the Beach

Eleven.  For a high. So of course we went down to our beach. It looked a lot like this.

"We" was actually just Cubby and me.  A. stayed behind to listen for Charlie to wake up from his nap.

It actually wasn't too awful down there, but only because there was no wind whatsoever.  Had there been even the slightest breeze, our faces would have frozen immediately and I would have hauled Cubby back up to the house before you could say "frostbite."

But it was sunny and still, so we played down there for an hour.  Well, Cubby played.  Mostly he chewed on little stalactites of ice I broke off the ice ledge near the water.  He told me they were very good popsicles*.  And when he got to the last inch or so, he would throw that bit away.  Because that was the core, you see.

He's a funny one, that Cubby.

I really should've brought the camera, but . . . I didn't.  I'm sure you can imagine it.  Cold, ice, freezing water, and a weird but entertaining kid.  That's my life.

* Did you know this was a brand name?  I did not, until my spellchecker highlighted it because it's supposed to be capitalized.  I did not capitalize it, though, because, well, because it looked too weird.  But just so you know, Cubby was not eating a brand-name Popsicle.  Perhaps they should look into making a Lake Water flavor.
Posted by Kristin @ Going Country at 12:28 PM 5 comments:

One of the unfortunate realities of parenthood is that you will never again get a sick day to spend feeling sorry for yourself and resting.

Well, maybe you do when your kids are older and capable of using a toilet by themselves, but I can't speak to that yet.  All I know is that when your kids are little, illness doesn't mean taking it easy; it means everything will just suck a lot more for however long you're sick.

But of course, your kids don't care.  They still want you to take pictures of yourself wearing stupid bunny ears: 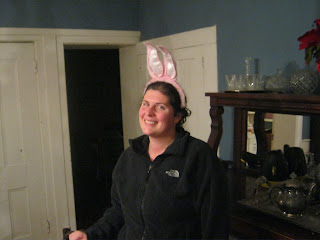 A. actually took it, but whatever.  I allowed this hideous picture to be taken, for the sake of my son.

And read stories about sheep and roosters building houses: 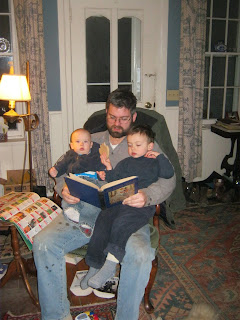 Yup, A. has the cold now too.  The family that coughs together, stays together!

And so you do it, because that, my lovelies, is parenthood.
Posted by Kristin @ Going Country at 6:12 AM 6 comments:

I knew it was coming, and here it is: The Cold.

Yes, my children were kind enough to share their misery with me, so we can all suffer together.  There's a lot of mouth breathing going on around here.

A. has so far not succumbed and is right now doing the dishes for me.  I must really look pathetic.

Oh well.  Par for the course with small people and their snot around.  See you on the other side.

P.S.  Just so we can end this on a note that does not involve disgusting talk of illness, you should know that Cubby has requested an air impact wrench for his birthday.  Also a log debarking tool and balloons.  I think he'll only be getting one of those three.  Guess which.
Posted by Kristin @ Going Country at 5:28 PM 6 comments:

Look! Some Stuff From My Camera! 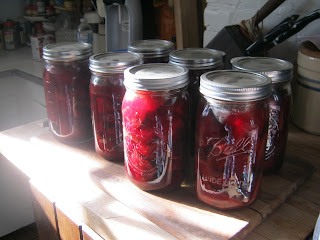 I love the sight of successfully canned pickled beets in the morning. 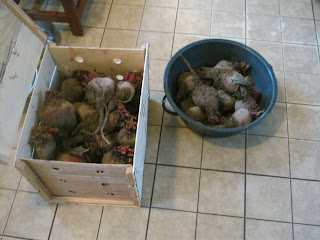 If you've ever wondered what a bushel of beets looks like, wonder no more. 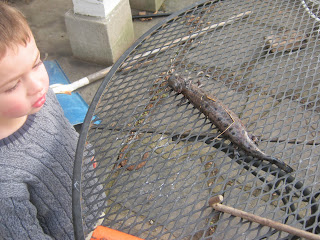 A. found a dead mudpuppy in the gully the other day and brought it home to show Cubby.  Not quite as gross as a lamprey, but mudpuppies are also capable of biting humans.  Not, obviously, when they're dead, however.

That's all.  You may carry on with your Sunday now, duckies.