The Great Western Move of 2018 continues.

When you move, you really want to get all your stuff in the back of the truck, drive to your new house, and unload it all. Even that is a challenge, but you add in an infant, two pit stops for more unloading and loading, AND a nail in the moving truck's tire, and you have one hellish move.

The nail was in the tire when we picked the truck up from Enterprise. A. noticed the soft tire (but not the nail yet) and asked them to check on it before we took the truck. They filled the tire, but didn't see the nail. A. saw it two hours down the road when we were stopped at a gas station.

Four hours later (nationwide chains are not my favorite), we finally had a new tire. This meant that instead of getting to our house in the north at 2 p.m. to load the truck, we got there at 6 p.m. And then spent the next five hours loading the truck (mostly A.) and finishing packing the house, plus cleaning (mostly me).

For those keeping track, that meant we worked until 11 p.m. And then Poppy inexplicably decided she was done sleeping for awhile exactly as we moved the mattress into the living room to sleep at 11:05 p.m.

So basically, there was no sleep on Thursday night.

At six the next morning, we were back at it, finally finishing up in a mad rush at exactly 11 a.m. The truck was completely full and not all that carefully arranged*. We booked it back to Blackrock (no nails this time, hooray), getting back at 5:30 p.m.

After a life-saving dinner the MiL had made--food was not the priority during our northern moving blitz--we started unloading a third of the truck with things that are staying at Blackrock. But first we had to take out all the miscellaneous things that had been piled in front of the rugs and beds and A.'s work papers that had to come out. And then we had to put all those miscellaneous things back in.

I say "we," but it was mostly A., while I dealt with our frankly hysterical children and tried to direct A. regarding what was staying and what was going.

At 9 a.m., he and Cubby started off for their drive to New Mexico. They're due to stop in Wisconsin at 11 a.m. tomorrow morning to pick up furniture at my aunt and uncle's house, before continuing to New Mexico.

I will not be there to help with the unloading, obviously--and I can't say I'm sorry about that--but I contacted the secretary at the school to ask if there were any high school kids who might want to earn some money helping A. with the furniture that requires two people. She gave me the number of our neighbor, who has both a husband and a son who can help.

So the moving continues, although my part of it is over for now. Until we get to New Mexico and I have to unpack all the very-hastily "packed" boxes and bags, and find places for it all.

Godspeed, A. and Cubby. May the road rise up to meet you and the nails stay out of your tires.

* One reason it was so full is because when you move from a rural area, there is no leaving things for the trash collection or for free for neighbors. Not enough neighbors and no trash collection. It all, including the bags of garbage, had to go in the truck.

Labels: all about me, Cubby, moving, the A team, travelin'

Long version: I had already done the serious scrubbing of the stove, so I was trying to minimize kitchen cooking. Grill to the rescue!

Short version: Scrambled eggs, tortillas with cheese (and deli ham, for those who like ham), carrot sticks

Long version: Cooking until the bitter end, yes. This was our last family dinner in our house up north.

Long version: We were driving at dinnertime, so everyone ate some combination of the peanut butter bread, cheese, apples, peanuts, cashews, carrot sticks, Fritos, and lollipops I had packed for the car trip. Thus, no one was hungry for the ham, rice, and (garden!) peas the MiL had waiting for us when we rolled up to Blackrock at 7:30 p.m. Although Cubby did manage a plate of rice and peas at about 8:30 p.m.

He's a good eater, that Cubby. Also, bedtime? What bedtime?

Long version: Three broiled steaks, a big pot of boiled potato chunks (purposely making enough for leftovers), and a big mess of garlic scapes sauteed in olive oil until they were a little crispy.

Crispy garlic scapes are a happy thing. So, so good.

The salad had lettuce from the MiL's garden, and beets and cucumbers she got from the farmers market here. It's nice to be back in the land of easily obtainable vegetables.

Long version: Can I claim to have signature skillet casseroles now after outlining my famous chicken skillet casserole*? Sure I can. This one was diced onion, leftover ham, carrots, leftover garlic scapes, rice, and cheddar cheese. Tasty.

The leftover steak and rice was for Charlie, who is not a ham eater, but then A. ended up finishing all the leftovers of both meals, so I guess it was a good thing we had both.

Long version: We were supposed to tag along with A. for errands in the Small City and then eat at the Chinese buffet (gross, but everyone but me likes it). But then Charlie wasn't feeling great, so A. went and we stayed home. Thus, last-minute food it is.

Long version: A., Poppy, and I left Blackrock at 7:30 a.m. to pick up the moving truck and drive up to our house up north to load it up. 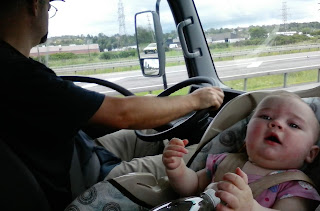 The moving crew at the optimistic beginning of our journey.

We were supposed to arrive at the house around 2 p.m. Thanks to a nail in a tire (I DON'T WANT TO TALK ABOUT IT), we didn't make it here until 6 p.m. We stopped at a grocery store on the way to get the store-prepared chicken and potatoes, plus the mozzarella for A.

The food wasn't very good, but it was far from the worst part of the day.

We're still up north, and we still have things to put in the truck. I have some anxiety that it's not all going to fit, though I suppose it will just have to. Allll the fingers are crossed.

* Famous because someone (hi, Linda!) actually made it based on the sketchy description I gave of it, and, even more amazing, actually liked the result. I'm pretty sure the Food Network will be calling me for my own show any day now.

As If We Never Left

And children on the lakeshore.

Yup. Definitely back at Blackrock.