When someone yells "Heads up!" at you, he or she is informing you of an undesirable object headed for you, from which, presumably, you should duck. So shouldn't it be, "Heads down"?

Yes, these are the ruminations on which I expend my brain power. Such as it is.
Posted by Kristin @ Going Country at 5:50 AM 4 comments:

Our Little Girl Is All Grown Up

Rita the Homeless Puppy had her first kill yesterday. Well, besides grasshoppers. The MiL was transplanting collards in the garden when Rita slithered through the narrow opening at the gate, headed for the corner of the barn, and promptly dispatched a baby rabbit.

I know many of you will be horrified at the thought of a baby rabbit being taken out, but I don't feel bad for it at all. Rabbits have no place in my garden. In fact, some bastard of an adult rabbit has been sneaking under the fence and eating all my green beans. This . . . irks me, to say the least. So any rabbit in the garden is fair game, as far as I'm concerned. Rita got a lot of praise for her hunting prowess.

She was very pleased with herself. I'm not sure if she ended up eating the rabbit, or if she just played with it after she killed it and then left it for one of the big dogs to eat. At any rate, it's clear that the killer instinct has been passed down to the next generation.

Auntie Leda is very proud.
Posted by Kristin @ Going Country at 4:59 AM 8 comments:

Don't you just hate it when your chickens stop laying and you have to start buying eggs? Like, with money? At the store?

I Probably Shouldn't Admit This

I think it's time for some True Slovenly Housekeeper Confessions.

And by the way, totally off subject, may I say how much I adore the British use of the word "sluttish" as a synonym for slovenly. It's so much more amusing. I would use it more often, if the American meaning of the word wouldn't get me so many funny looks.

I mopped the kitchen floor yesterday. It had gotten way too gross to stand any longer, what with a pickle brine spill, dogs tracking in mud, and what appeared to be some of A.'s very red spice rub flung at random about the floor. While I was mopping, it occurred to me that SOME people probably mop their kitchen floors on a regular basis, not just when they get too disgusting to tolerate. Some people may do it every week. Or more frequently. I should be one of those people, because our kitchen gets a lot of heavy, very dirty traffic, and the floor is always pretty nasty. Except it's for that very reason that I DON'T do it all that often. It's such a Sisyphean task, you know? No sooner has the floor partially dried than dirty boots are stomping through, someone drops food on the floor getting lunch, or the dogs come in and spread their filth with abandon. It's dispiriting.

I figured that the last time I mopped was about a month ago. The time before that? Who the hell knows.

I'm pretty sure I will not be getting the Housekeeper of the Year Award this year.

So tell me, duckies: How often do YOU mop your kitchen floor?
Posted by Kristin @ Going Country at 6:01 AM 18 comments:

So, Kristin, you ask. What did YOU do yesterday? (Do you like how I'm making YOU talk in MY posts now? I think that may be a sign of some kind of blogging psychosis.)
Thank you for asking. Among other things (laundry, dishes, more laundry, paperwork . . . and yes, MORE LAUNDRY--we are dirty), I cut many, many kernels of corn off of their cobs. 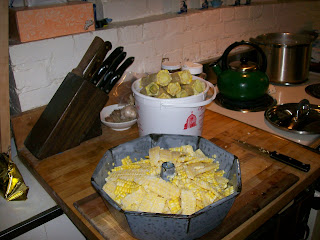 Corn off the cob. See the naked cobs in the back? Shameful.

Now Kristin, you say. Why in the name of Jesus, Mary, and Joseph do you have all that corn in a bundt pan, of all things?

Ah. And here we come to the point of today's post. (What? You were maybe thinking there was no point? Shame on you! I always have a point! Maybe not a GOOD point, but still.) I felt that it is my civic duty to refer you to the post I did last year about the best way to cut corn off the cob. So, if you have ever struggled with corn ricocheting all over the kitchen and you routinely end up with more corn on the floor than on your cutting board, go read this post. It will change your life for the better.

And after all, that's my whole reason for writing this drivel: to change lives.

* I would like to apologize for that title. It's terrible, I know. Unfortunately, nothing better was coming to me.

It's the Little Things

Now that I have fresh tomatoes again, I can have my very favoritest breakfast: toast with cream cheese and sliced tomatoes. Life is good.

What's been making you happy recently?
Posted by Kristin @ Going Country at 6:07 AM 9 comments:

Labels: all about me, confessions, country wisdom, fun with food, randomness

This Will Be Funnier Later

Yesterday, we were expecting A.'s friend J., the one who fishes ALL THE DAMN TIME, for dinner. A. decided he really wanted to make ribs on the grill. Well, who am I to stand between a man and his ribs? (Also, it meant that all I would have to make would be some corn on the cob and a salad. Works for me.)

So, he bought the ribs. This is unusual in and of itself, because we very rarely buy meat. Because of this and this, you see. Anyway, he bought the ribs, he rubbed it with his very own spice rub mixture, he started the coals at 2 p.m., he propped the grate up on bricks so it would be at the right distance from the coals, and he monitored the meat for the next three hours. It was, as you can see, A Process. But he was willing to do it, because it meant he got to have ribs for dinner.

J. arrived about 5 p.m. and I started my final preparations for dinner. Just as I was about to set the table, I glanced out the window at the grill and saw . . . no meat. With a sinking feeling, I went out to find A., who was sitting on the porch with J. I asked him if he had taken the meat off the grill. He said no. I said it's not there. There was a second of silence, and then he got up out of his chair with every intention of exterminating the dog that had absconded with his carefully coddled ribs.

There was nary a rib to be found. And all the dogs were milling around, sniffing the grill area and looking innocent. But we have only one dog who is smart enough to be capable of deception. Three of the dogs would have grabbed the meat and settled down right in front of the grill to gnaw on it. Otty, however, is quite clever enough to have snatched the meat off the grill and jumped the neighbors' fence with it, where I have no doubt she hid it away somewhere and returned to it at her leisure.

So, with no evidence, A. was forced to abandon his plan for revenge. I headed into the kitchen to cook after all, falling back on the reliable combination of bacon, potatoes, and cheese for a main dish. It was good, but it wasn't ribs.

Oh well. We may not have had the ribs, but we got a good story out of it.
Posted by Kristin @ Going Country at 5:58 AM 11 comments: