Aliens in the Kitchen

The MiL sent a stalk of brussels sprouts to me via A. the Courier this week.

What's that? You wouldn't think of your daughter-in-law when you see stalks of brussels sprouts at the farmers market? Well, good thing you're not my mother-in-law, then.

A. forgot about the stalk in his car until today. Luckily, brussels sprouts on the stalk are extremely hardy and can sit quite happily in a cold car for three days without any issues. 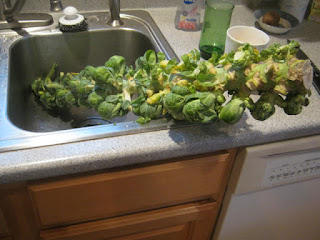 Were I the crafty sort, I feel sure I could make an excellent Halloween decoration from this. But I'm not crafty, so we'll just eat them instead.

I cut off all the alien heads and have them soaking in salt water right now (to draw out any cabbage moth worms that might have taken up residence). I don't know how I'll cook them yet. I have some ham stock going on the stove at this very moment, which seems to be a natural partner to anything cabbage-y.

Roasted is of course the most popular method of cooking brussels sprouts at the moment. That's good, too. The best brussels sprouts I have ever cooked (and eaten) involved shallots, bacon, and heavy cream--and how could it not be a winner with those ingredients, right?--all of which I happen to have on hand.

So many options, so many delicious aliens awaiting consumption.

Labels: all about me, confessions, fun with food, MiL, randomness, the A team 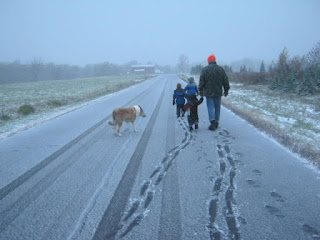 This ain't no suburb, kids. Ain't no tropical paradise, either.

It wasn't actually that cold--hovering right around freezing--but the wind was so strong that on the way home, I actually turned around and walked backward for awhile to avoid the 20-mile-an-hour snow blowing directly in my face. And it was pretty much dark by the time we got home at 6 p.m.


I went to the mechanic in the nearest village today to get my tires rotated*. The guy who owns the place is named Randy. The guy who did the actual work was named Andy.

Randy and Andy, the small-town mechanics. This SNL sketch practically writes itself.

* Everything on my van is now so rusted that A. quite correctly assumed only a hydraulic wrench could get the lug nuts off. And even with that, it still took forever. Plus, there was a muffler bracket that was loose and rattling around irritatingly. I asked them to see if they could weld it back together or something. Randy told me it was rusted through, but that the rust had also basically fused the muffler together, so the bracket was unnecessary at this point. He just cut it right off for me. Randy and Andy are obviously the right mechanics for my old mess of a vehicle.
Posted by Kristin @ Going Country at 11:26 AM 2 comments:

Labels: all about me, confessions, country livin', randomness, the A team

An Unexpected Reward for Virtue

But I also did not want all that crap hanging around and getting in my way anymore. So I gathered up all the trash and recyclables (and the children) and went. We got there fifteen minutes after it was supposed to be open. It was closed.

However! I had seen a car coming from the opposite direction as I was turning into the dump. The road the dump is on is so unpopulated that I thought the odds of that car belonging to the dump lady were pretty good. So I waited a minute. Sure enough, the car turned in to the dump and the dump lady got out and started opening up the gate and unlocking the dumpsters.

I waited until she had parked her car and gotten everything set up before I drove in. I greeted her cheerfully (I'm a big believer in fake cheeriness for the sake of politeness--it wasn't her fault I was grumpy) and started sorting the recyclables to give her time to get everything ready before I drove up the ramp to the trash dumpster to throw in my two bags and pay her.

But when I got out my wallet, she told me there was no charge and thanked me for being patient. Hooray!

You are so welcome, dump lady. And thank you for the kind gesture. It was much appreciated on a grumpy Wednesday morning.

Labels: all about me, confessions, country livin', randomness

It's a Family Tradition


Not, however, the sort of family tradition of which Hank Williams, Jr. sang. Much more wholesome than that. I speak of a tradition of the MiL's from her childhood that I revived last night for my own children: popcorn and ice cream for Sunday supper.

The MiL has told us many times that this was what she and her five siblings had on Sundays for supper. The reason they had this was because they had the traditional big Sunday family dinner in the mid-afternoon, and so there was no need for a real meal just a couple of hours later. Also, popcorn and ice cream requires little preparation or clean-up, which was probably a welcome change for her mother, what with the relentless feeding of six kids day in and day out*.

A couple of weeks ago, Charlie told me we should have popcorn for dinner. I explained that popcorn is not usually a good option for dinner. Except, I added, if you have a big meal in the afternoon like Grandma did when she was young, and then you can have popcorn and ice cream for dinner.

Charlie was approving of this idea, to say the least. Popcorn and ice cream are two of his favorite things, whereas the sort of nutritious, balanced meals we have for dinner are not usually his favorites.

And then, yesterday we had our big meal at 3 p.m. because A. had to leave to drive back to Blackrock in the late afternoon. This departure was unpopular with the children, all of whom of course prefer Fun Daddy to Boring Mom. So to raise spirits (and also, like the MiL's mother, to avoid cooking and cleaning up again), I let them have popcorn and ice cream for dinner. AND, because I'm not always Boring Mom, I even let them have their ice cream first.

I heartily recommend this tradition. It almost felt like a day off from serious meal preparation, because I did the real cooking earlier in the day and it was all cleaned up and done by the time I was ready to just flop down in the evening. There were obviously no complaints about unpopular foods from the children, and even Mia got to eat all the popcorn that inevitably ended up on the floor.

I probably won't do it every Sunday, but every once in awhile, I think we'll  honor Great-Grandma's memory with popcorn and ice cream for Sunday supper. Charlie approves.

* She also helped her husband run the family farm and worked as a traveling bookkeeper for other farms. She was a busy person.