Long version: I made a large pot of boiled potato chunks this day, both to use up the last of the now sad-looking big box of Sysco potatoes and to have some potatoes already cooked for the coming hot days.

The spinach also came from Sysco, in a five-pound bag. It was fresh spinach, which means it was a very large bag. But even a very large bag of spinach cooks down to not much spinach. I froze most of it in balls to use later, but this night I cooked some of it with the now-wrinkly grape tomatoes my mom brought.

Long version: Leftover pork with the New York State barbecue sauce the MiL sent back with A. She also sent several cans of Grandma Brown's baked beans, another New-York-State-specific product, and the ideal of baked beans according to my children.

Long version: This was a boned-out roast that I browned, then took out, sliced, and put back in the pan with a couple of cubes of garlic scape pesto and a bit of heavy cream.

Long version: Another roast, this time browned, sliced, and then added back to the pan with a sliced onion and bell pepper, plus cumin and chile powder.

The children got to have theirs with flour tortillas that my mom brought, which made them happy.

And then, after Cubby ate his burrito, he asked me if he could have another flour tortilla with baked beans in it. We had some beans left, so I said okay, and then he made himself an enormous baked bean burrito. It had like a cup of beans in it.

He ate every bite. Okay then. 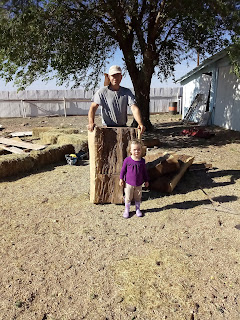 One of the giant slabs of black walnut A. brought back from New York, with Poppy for scale. She is not tiny. The slab is just that big.

Well, that made everything much more exciting, didn't it? Sure.

Long version: The last package of those giant bone-in chicken breasts, just simmered until they were shreddable, then mixed with more of the New York barbecue sauce.

And more potatoes. Told you it was a large pot of potatoes.

I promised the kids Oreos if they would get the living room picked up really well so I could vacuum the next morning. I'm sure our neighbor--Miss Georgia--who gave us the Oreos would approve of my using them in this way.

Long version: I know you all just did a double-take at the word "vegan" up there. Has such a thing ever been seen before here in this chronicle of carnivorous cooking?

No. (But I hope you appreciated the alliteration there.)

The tamales came from the bed-and-breakfast-type place my parents stay at when they visit us. The lady who owns it stocks the kitchen with all kinds of things, and one of those things was a package of frozen vegan tamales from a Santa Fe tamale company. My parents brought them here thinking we might make them one of the nights they were visiting, but it was really hot then and I didn't want to steam anything for 30 minutes.

It was hot last night, too, but I steamed the tamales anyway.

They were tasty, but . . . lacking. Lacking the adhesiveness and flavor that a cup of lard gives them, that is.

We ate them with sour cream, cheese, and, in some cases, antelope meat. So that pretty much negates that whole "vegan" thing.

You expected anything else from us?

Long version: This was real pesto, made with basil instead of just garlic scapes. This is the first time this year that we've had enough basil from the five plants still alive in the garden to make pesto.


It occurs to me that my last few posts have focused quite a bit on the raging fire near our house, and a lack of updating here may lead some people to fear we were swallowed by that fire.

We had one bad night when the wind was blowing directly to us from the fire and we could see it just over the paved road a few miles to the south of us. We figured that if it jumped that road, there was nothing to stop it from running right through the (very dry) pastures to our house. That was the night I packed all the essential documents and put the bag by the door.

A. stayed up to watch, though, and around 10:30 p.m., the wind shifted just a bit, the humidity went up, and the crisis was over for us.

Also, there was a big truck with a water tank on the back that was running up and down that road for hours, soaking the ground on the south side.

Can I tell you how grateful we are for the 75 men and women who showed up to help fight this fire? SO GRATEFUL. Most of them were from volunteer fire departments all over the northern part of the state, and they had to come a looong way to help. The community donated food, water, and places for them to sleep, and the school opened up so they could shower.

It's very comforting to live in a community that can mobilize so quickly when there's an emergency.

That fire is about 90% contained right now, burning in isolated pockets of trees on unoccupied range land. It probably won't be 100% out until it rains, though, and we don't have much of that in our forecast.

Anyway. Let's hope that's the last of the fire talk for a very long time.