Just Because It's Spring

And the magnolias aren't going to last too long this year, so I thought I should post a permanent record of what they look like now. These sorts of spring-y photos are always nice to look at in the miserable depths of winter. 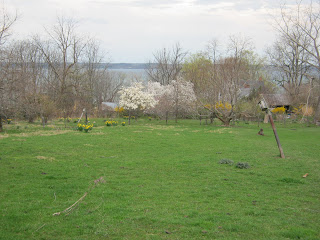 Even if the sun wasn't out when I took them. Which has been the case more often than not this month. 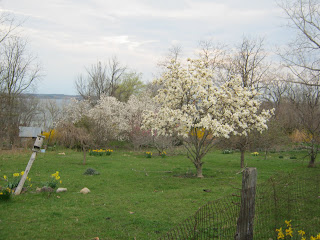 It's been the wettest April on record. Boo.
Happy spring!

Yes, I Watched the Royal Wedding

I thought I should just get that out of the way right up front. If I lived in the west, I would not have been one of those dedicated people who got up at 3 a.m. to watch, but since I was awake anyway and Cubby was still asleep, I turned on the TV. It was definitely worth watching. Sort of a combination Macy's Thanksgiving parade/Presidential inauguration/Grammys--if I may make some very American comparisons. Those Brits know how to put on a show, for sure.
ANYWAY.
Know what else is putting on a show right now? Our daffodils. The whole family hiked up to the morass of mud known as the pasture the other evening just to see them in their full glory.
First A. let the sheep out to graze on the neighbors' fresh grass. 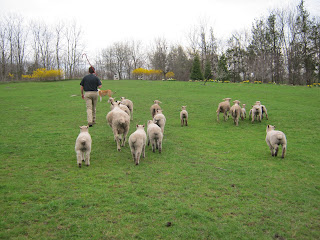 Because it IS always greener on the other side of the fence.
Cubby came too, of course. The pasture is really fun for Cubby. So much to do and see. 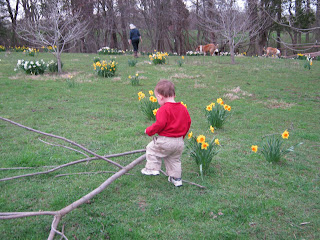 He favors sticks over flowers.
So much mud to wallow in. 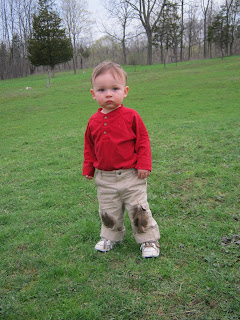 There is no point in trying to keep a farm boy clean. Talk about a losing battle.
Old bathtubs full of stagnant water and random pipes in the ground to inspect . . . 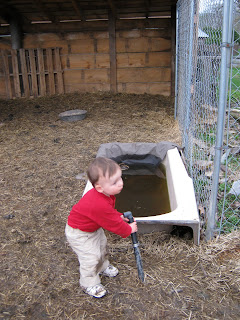 It's a pretty good life for a toddler.
Happy Friday, duckies!
Posted by Kristin @ Going Country at 7:07 AM 8 comments:

Right. After a few days of all talk and no photo action, may I present . . . 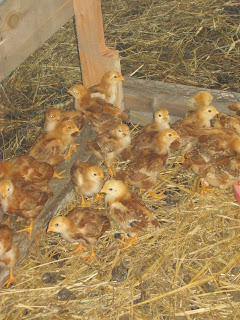 CHIIIIIICKS!!!! (That one's for you, J.T.)
They're about two and a half weeks old now, which is why they are no longer just bundles of yellow fluff but instead look like . . . miniature chickens. The breed is Rhode Island Red, which is a very old dual purpose breed (meaning for both eggs and meat) known for its hardiness. Good thing, considering their new home.
And speaking of their new home . . . 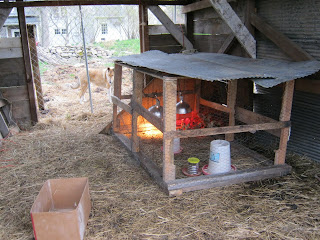 CHICKEN TRACTORRRR!!! (What, not as exciting?) (Please note Mia gazing in longingly from outside the barn.)
I didn't actually take any pictures of the chicken tractor as it was being built, but you can see it's just two rectangles top and bottom with three vertical supports on either side (plus one horizontal on either end for stability). The whole thing except the top and bottom was then wrapped in Satan's wire and put in the barn with a couple of spare pieces of metal roofing on top. A. pried apart pallets to use for the supports on the sides and end, because that wood is thin and makes the whole thing lighter. Also, that way it was free, which is always our aim.
Woodchuck construction at its finest.
It's not actually a tractor yet, because we haven't put wheels on it. So it's . . . a litter, I guess? A. and I can carry it together anywhere we want to put it for now. We do have two old wheels that came off Grasshole, so if we can rig up an axle and put those on the back, then I guess it would be, oh, a rickshaw.
Yes, in time, we may have the world's only chicken rickshaw. We aim to be original.
Posted by Kristin @ Going Country at 5:26 AM 10 comments:

I did take some pictures of the chicks in their chicken tractor yesterday, right before Mama N. unleashed some torrential downpours that washed away deep ravines in our driveway and dumped a few gallons of water through the exhaust fan in the ceiling into the downstairs bathroom.
Yay.
So instead of chatting about chicks this morning, I have to go outside to try to rake the driveway back into some semblance of levelness. And possibly take apart the bathroom fan, which appears to be stuck on.
Until later, my duckies.
Posted by Kristin @ Going Country at 6:52 AM 2 comments:

I'm still pretty tired today, which is probably because I did not so much rest yesterday as haul chairs back to the barn, move furniture, wash linens, vacuum, sweep, and generally clear up from the Easter festivities. No photos of that, though, because, well, I was busy and does anyone really need to see pictures of empty wine bottles and dirty napkins? No.
But you DO need to see photos of the tomato seedlings I transplanted to bigger pots during Cubby's second nap. Yes, you do. Just trust me on this. 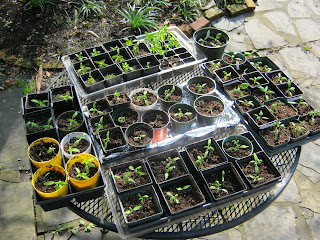 See? You NEEDED to see this. Don't deny it. 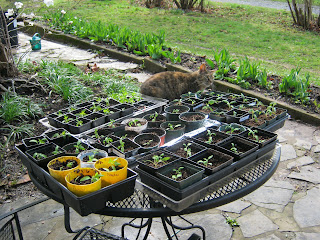 Just like Belle NEEDED to take the only open spot on the table for a nap. Weirdo.
I have about 75 transplanted, with 30 or so still to do. But I ran out of pots. So those 30 have to wait until A. gets to the Small City to get some more pots for me.
And let's see what else we had on the camera . . . 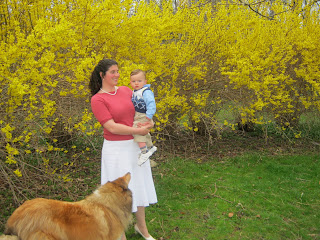 We have proof that I don't ALWAYS wear mud-stained jeans and faded sweatshirts. Just ALMOST always. 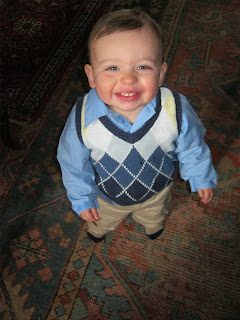 Oh yeah, and proof that Cubby is a total ham. Also, extremely cute in his nerdy argyle sweater vest.
Those were from Easter, obviously. Unfortunately, there was no opportunity to take a family photo when all of us were dressed up and Cubby was awake, so we continue our long tradition of not ever having all three of us in a picture at the same time.
I don't seem to have any pictures of the chicks or the chicken tractor yet, so I'll remedy that today and maybe tomorrow will be an All-Chicks Photo Post.
Or maybe one of the dogs will tree a raccoon and boot the chicks as a post topic once again. You never do know at Blackrock.
Posted by Kristin @ Going Country at 8:01 AM 5 comments:

So Much To Tell

No energy to tell it. So how about a handy yet somewhat boring cop-out list?
1) We had twenty people for Easter dinner here yesterday. Which is why I have no energy. But we do have a lot of leftovers, so at least I don't have to cook today.
2) We also took Cubby to church yesterday. The service falls smack in the middle of his usual morning nap time, so it required some complicated machinations to figure out a way to have an awake and not cranky Cubby for a whole hour. He was definitely awake and not cranky, but he was also not about to sit still for an hour. Or even stand in one spot. He made it about 45 minutes (with the aid of some hot cross buns the MiL had fortuitously baked for him), and then A. had to bring him outside to run laps around the church parking lot.
3) Instead of doing housework on Saturday, A., Cubby, and I took a family field trip to the Small City to visit the farm store and pick up the Easter flowers for the MiL's church. We also stopped on the way to get 24 Rhode Island Red chicks (surprise!). Which is why we had to go to the farm store, for the starter feed and a new bulb for the heat lamp.
4) That Subaru can carry a CRAZY amount of stuff. Specifically, seven large boxes of flowers, fifty pounds of chicken feed, 25 pounds of oyster shells (for our old hen--they need extra calcium), a few bags of miscellaneous farm store purchases, a box of chicks, two adults, and one toddler. Possibly also a partridge in a pear tree. I love that car.
5) The guy we bought the chicks from had some two-week-old chicks, so we got those. They were significantly bigger than the hatchlings we were expecting, so the tub we had set up for them was too small. Which is how A. ended up spending the rest of Saturday breaking up pallets for lumber and building a chicken tractor. The chicks are now located in the currently-unoccupied sheep barn in the paddock, where the dogs can hear them and smell them but can't get to them. How very frustrating.
6) The tomato seedling forest in the study is getting to a critical stage. I really have to transplant pretty much all of them to bigger pots. Like, now. And it's raining. Again. So I can either stand out in the rain to do my transplanting, or make an enormous mess in the kitchen. Decisions, decisions.
7) I have relevant photos to illustrate all of this, but they're still on my camera. And I now have even LESS energy, so the photos will just have to wait.
8) Is it bedtime yet?
Posted by Kristin @ Going Country at 4:40 AM 8 comments: 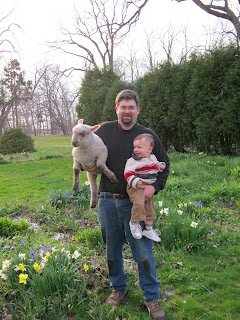 Happy Easter
from Blackroc
k
P.S. Cubby is actually laughing in this photo, despite the yelling lamb six inches from his face. Still no fear.
Posted by Kristin @ Going Country at 5:09 AM 6 comments: