Let us all just pause for a moment and let it sink in that today is exactly one month before my due date with Baby #4. (And Girl #1.)

Now that the pause is over with, I can acknowledge that that doesn't actually mean all that much, considering babies come when they damn well please. Cubby was ten days early. Charlie and Jack were each a couple of days early. So maybe this one will be early too. Or maybe she'll be three weeks late, like I was.

That's unlikely, actually, because the medical community really doesn't allow women to go that far past their due dates anymore. So it's safe to say that I'll be having this baby next month one way or another.

I washed and sun bleached the diapers yesterday and there are 25 quarts of applesauce in the utility room. I'm totally ready, right?

Labels: all about me, baby stuff, confessions


Though I would never be considered a meticulous housekeeper--let's not talk about the last time I cleaned behind the television, for instance--I do have some serious issues with clutter. It adversely affects me in a very noticeable way. Emotionally, mostly.

This is very unfortunate, considering that I live in a two-bedroom house with four other people, three of whom are small children. And that there will shortly be another small child in this already-crowded house.

I spend a lot of time picking up, putting away, and throwing things out when I can get away with it.

My absolute least-favorite kind is the kitchen counter clutter. My children are forbidden from putting any of their toys, pencils, papers, or other junk on the kitchen counters. That's my work space. My cubicle desk, if you like. It drives me crazy to have to work around non-essential items.

But this time of year, I don't mind a certain kind of kitchen counter clutter. 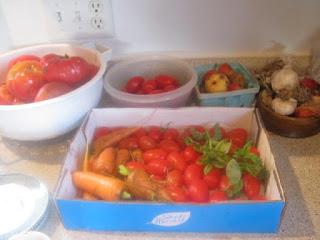 It makes me happy to see my counter filling up with tomatoes. It also makes A. happy, because it means that we all have to be appropriately congratulatory about his woodchuck greenhouse, without which I doubt there would be enough ripe tomatoes to clutter up anything.

Of course, this kind of clutter is much more satisfying to take care of than, say, picking up a thousand small pieces of cardboard from Cubby's latest complicated cardboard creation*. Because this kind of clutter gets turned into Finny's tomato sauce. Also, at the command of Prince Jack, some apple/pear sauce. 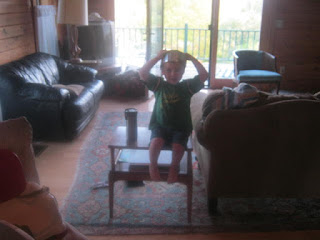 Don't cross the boy with the crown.

Then most of the clutter turns into food for the freezer. 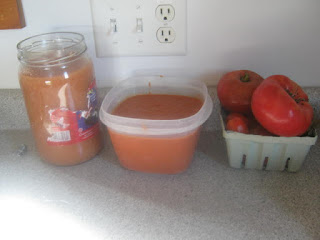 Actually, the apple and pear sauce (in the jar) will probably all get eaten before I have to freeze any. But some of the tomato sauce will get to the freezer. Hooray.

The only downside? More clutter in the form of this: 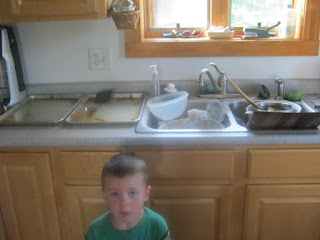 * That kid makes everything out of cardboard. Crowns (he made the one Jack is wearing in the photo), robots, castles, and, lately, a smartphone. Yes, out of cardboard. He made little letter pieces that can be arranged to type things out. He informed me quite earnestly that he's been puzzling over how to add Minecraft to it next. And this is why I will never buy him a real smartphone like his friend from school has, which constitutes his sole exposure to the addicting devices. Much better to make them out of cardboard. At least when you're seven years old.

Labels: all about me, Cubby, domesticity, fun with food, Jack, The Tomato Crazy

And Yet, I Keep Typing

That's hard to believe. How could I possibly have 2,502 posts' worth of words to spew about essentially nothing?

That was a joke.

Just for the sake of round numbers, I should have noted that this thrilling post about canning applesauce was #2500. But if I had known that one was such a momentous marker, I would have felt some pressure to make it, like, about something, rather than just a random stream of consciousness about The State of My Canning.

And really, that's perfectly representative of the entire story I've been telling here for the past, uh, almost ten years. (That is also hard to believe.) Random and not terribly exciting, but fun anyway.

So here we go with the next 2500 posts about inconsequential triviality. Thanks for coming along for the ride.

Fodder in the Playroom


Yesterday evening I was upstairs doing dishes when I heard the children shrieking from downstairs, "SHEEP IN THE HOUSE! THE SHEEP ARE IN THE HOUSE!"

I went downstairs to find the four remaining rams milling around in the kids' bedroom.

A. was moving their fence, so they were wandering around and apparently wandered right through the downstairs door that one of the children left open.

They were happy enough to follow me back outside, though. After all, it's not as if there was any corn in the kids' bedroom.

I did not run upstairs to get the camera to take a photo for you, because I really wanted them out of the house quickly.

I shut the door and went to find A. "Your sheep were just in the kids' bedroom," I said. "But at least they didn't poop in there*."

As if our whole lives aren't blog fodder without even trying.

Then, when the kids were picking up downstairs before bed, they discovered that while the sheep hadn't pooped in their bedroom, they HAD pooped in the playroom.

Luckily, sheep poop is relatively dry and inoffensive and easy to clean up. Easy for A. to clean up, anyway, because I certainly wasn't doing it. And the boys, of course, found the whole thing HILARIOUS.

Come on, cold weather. We need to do some more slaughtering.

* It's important to be cool when dealing with things like sheep. Otherwise you'd spend all your time getting hysterical about things like livestock in your house.