A. took the boys to Tucson on Tuesday, which is quite obvious in my cooking. In that I kind of . . . stopped. But don't worry! We still ate.

Long version: I found one more package of cube steaks in the freezer, which I marinated with olive oil, vinegar, chile powder, and cumin, then seared and cut thin for tacos.

They were a little bland, unfortunately, but nothing a little salsa couldn't fix.

Long version: I hadn't taken any meat out to thaw and was vaguely planning on making tuna patties when Miss Amelia's daughter showed up with a large jar of soup her mother had made for us. It was a chicken soup with celery, potatoes, carrots, and I think barley. Or maybe brown rice. Something kind of chewy, at any rate.

In any case, it was good. That's what most of us had. A. and Charlie, who is not a soup fan, had the rest of the cube steak plus three leftover kibbeh heated up with salsa and put in tortillas with cheese.

Long version: Yeah, about that tongue . . . I did not want the tongue from the cow we bought last year. But somehow I ended up with a package clearly labeled "tongue."

Not clearly enough, apparently, as I grabbed it thinking it was another package of beef ribs and didn't realize until after everything had braised for several hours that there was one thing in there that looked nothing like ribs. Because it was a tongue.

A tongue is very, very identifiable, FYI. I mean, it looks just like what it is. And cows have very large tongues.

I've never cooked a tongue before--and wouldn't have this time had I known what it was--but I think they're supposed to be peeled first. You know, to get rid of the tough covering that has the tastebuds on it. (GROSS.)

I was kind of slicing it open and examining the edible part inside when Cubby wandered into the kitchen and asked what was for dinner.

Could I resist? No. I stuck the very-recognizable large tongue right in his face and cheerily said, "Cow tongue!"

His response? "NO WAY! Hey Charlie, we're having cow tongue for dinner!"

So then we had to have cow tongue for dinner.

It tasted fine, although the texture was a little soft for me. The kids liked it. Nevertheless, I couldn't face more dissection of the tongue, and cut up what was left for the dogs. They liked it, too.

Long version: This was the remainder of the meat from the beef ribs (NOT THE TONGUE) that I put in the skillet with some green chiles and salsa before adding the cooked rice and shredded cheese.

Long version: A. left early this morning with the boys to go to Tucson to see family, leaving just Poppy and me at home. It was horribly windy and I was freezing all day. So I made soup, because vegetable soup and cheese is my idea of a perfect meal. And there were no militant carnivores around. 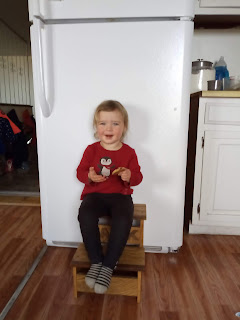 Sampling the chocolate chip cookies we made this day. Also whee.

Long version: In honor of the holiday, I decided we should have something other than leftovers. Although, since I used leftover rice and leftover roasted bell pepper and onion in the fried rice, I'm not sure it counts. 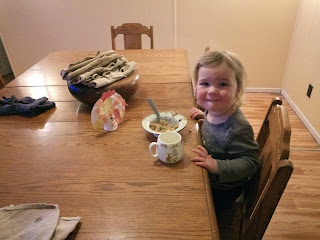 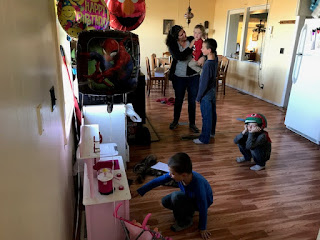 Yup. For this whole messy, chaotic life. And especially for the mess- and chaos-makers.

Happy Thanksgiving, my lovelies. I hope it's filled with the best kind of chaos.

Waiting on the World To Change


It is currently 31 degrees, dry, and windy. But when I get up tomorrow it will be snowing. And it will continue snowing most of tomorrow and tomorrow night.

I was not dreaming of a white Thanksgiving, if only because it makes animal care so much more difficult. They still need food and water, even if their hay is covered in six inches of snow and the outside tap is frozen. And even if the power goes out, which is a distinct possibility.

So I took some measures to ensure that no matter what happens tomorrow, I can feed and water our growing menagerie without too much aggravation.

First I placed a large tub in A.'s office--which has a door leading directly into the shop--and filled it with water. That way I'll have plenty of water to put in buckets for the horse, chickens, and dogs, with or without a functioning tap or water pump. 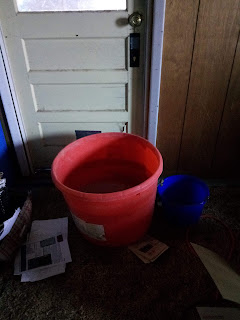 No one needs to go in and out of that door anyway, right?

I used some rocks to secure a tarp over part of Samson's hay in the pasture, because it's not under cover and if it snows as much as they think it will, he might have a hard time getting to it. I might have to dig the tarp out a bit, but at least once it's moveable, I can just flip it off to uncover the dry hay underneath.

For the chickens, I cooked a couple of the greenish pumpkins from the volunteer plants. They'll probably stay in their coop for a couple of days, and having food for them to peck at keeps them from pecking at each other.

And finally, for the humans, Poppy and I made chocolate chip cookies. 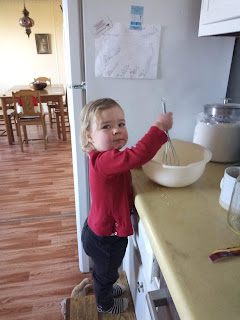 I suppose we could eat some pumpkin, too, but cookies sounded much more appealing.

Okay, Mama N. I'm ready as I'll ever be. Bring on the Thanksgiving snow. (But not too much, okay? Thanks.)