As Heard in the House

Poppy decided it was high time she went camping and fishing again, so she informed A. of this fact.

Me: You're a real outdoors girl, huh, Poppy?

Me: Yes, you are special.

Me: Okay, don't overdo it. Vanity is unappealing.

I was in the kitchen preparing to can sauerkraut, which involves first heating the sauerkraut to boiling before putting in the jars. During this process, Cubby came through the kitchen and exclaimed, "What is that SMELL?"

Me: Sauerkraut. Now move on.

Next, A. came in the kitchen and said, "Why does it stink all of the sudden? It smells like the sewage backed up."

Me: No, it's not sewage. It's sauerkraut.

A.: Oh. Well! That's some powerkraut.

And then I spent about two straight minutes laughing to myself in the kitchen. You know next time I cook sauerkraut, I'm going to tell them all we're having sewage for dinner.

Labels: fun with food, Poppy, the A team

Friday Food: Exotic Food From the Outside World

Long version: My sister came for the weekend and so of course I made pizza. One with just cheese, one with bacon, onion, and a bell pepper from the garden. Yum.

Long version: My parents came for the weekend, too, and so I made a Mexican feast.

The rooster was another extra that my friend gave us, and the two rabbits were shot by A. the day before when he saw them hanging around at our house next door. Something has been eating his sprouting saffron crocuses, so he hopes that he took care of that problem by taking care of the rabbits.

I just boiled all the various meats until I could shred them, then added that to the sauce I made from onion, garlic, tomatoes, roasted green chilis, red chili powder, cumin, and paprika, plus some sour cream at the end because neither animal had any fat on it.

I really don't want to be standing over a blazing hot griddle pan for half an hour if the kitchen is at all hot already, so it's been awhile since I've made tortillas. It has definitely cooled down now, though, so tortilla time is here again.

The pinto beans just came from the freezer. I think this was the last jar from the big batch I had split up to freeze some time ago, so I guess it's time to make another big batch.

Our squash, I'm sure I don't need to tell you. And a whole bag of avocados my sister bought cheap at the grocery store because they were very ripe, which made just enough guacamole for all of us.

I do truly love guacamole. There are dozens of ways to make it. Personally, I like very well mashed avocados mixed with a bit of mayonnaise, garlic powder, salt, and quite a bit of lime juice. I'm sure it's not at all traditional, but it sure is good. This time, Jack helped me make it. 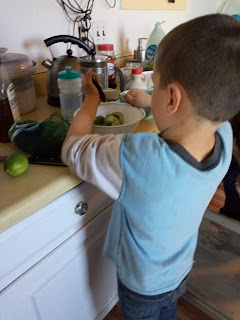 First we scoop, then we smash. Perfect for kids.

Long version: Poppy chose stir-fry for her birthday dinner. I made it with pork loin chops and a bunch of vegetables, including exotic ones like snow peas and asparagus brought by my parents.

You wanna see the latest Ugly Cake? Of course you do. 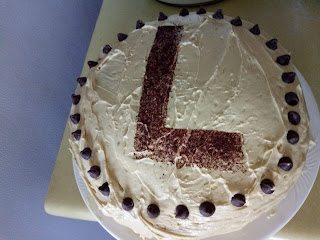 A vision in brown.

I didn't have any ice cream, but I did have a bunch of heavy cream my sister brought us. So I used that to make vanilla Mason jar ice cream. Not as good as real ice cream, but fine in a pinch.

Long version: Some of the varities of winter squash we grew this year are dense and sweet enough that they can be roasted in cubes like sweet potatoes. They're a hell of a lot harder to prep than sweet potatoes, what with their hard skins and big seed cavity that has to be scooped out, but they're also not 60 miles away at a store, so there is that.

Apropros of nothing, I have now turned over the Sunday morning after-church breakfast to Cubby. He loves making pancakes or waffles, Poppy loves helping him, and I love sitting in my chair while he cooks. 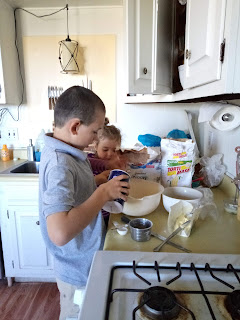 Here they are making a type of cornmeal pancake that the children call Fudge Bunnies. There is neither fudge nor bunnies in them. It's a long story.

Long version: This was the very last of the fresh pesto for the year, made with the plants I pulled out before the freeze last week. I also threw in the last of the shredded asadero cheese from when I made pizza.

While I was boiling the pasta, I tossed in some fancy french green beans my mom brought me. They float at the top of the water while the pasta sinks down, so it works pretty well to cook them together and then just scoop the beans out when they're done. Plus, one less pot to wash.

Long version: My mom brought us a package of top loin steaks, which were very good. They were made better, though, with the addition of garlic scape pesto mixed with butter. Yum.

Down Come the Ceilings

When we last left our intrepid house rehabber (is that a word?), he had ripped out a lot of nasty old carpet and some wall paneling, and was steeling himself to pull down ceilings.

There is no way to pull down a ceiling that does not result in a literal rain of filth on top of the puller's head. He got it done, though. 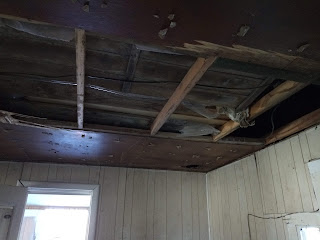 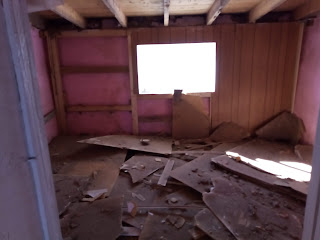 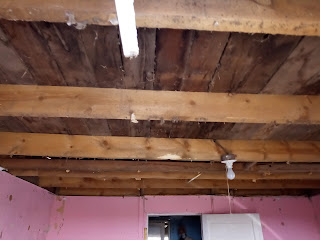 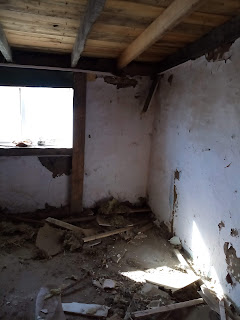 He found some cool stuff while he was doing the demo. Like the original adobe bricks under the plaster in one room: 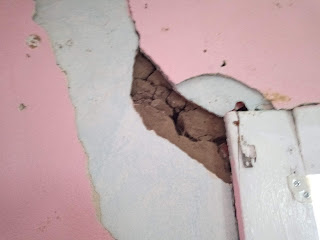 Circa approximately 1920 he thinks, although it's hard to tell here because adobe building has been in use here for so long and was still used until not long ago.
The house appears to have begun life as a two-room adobe, and then was added on to at different times over the years with different materials. Some walls are stone, some are cinder block, some are more modern two-by-fours. It's an interesting example of the history of the building materials in this area.
The fun (fun?) part over, A. then began the tedious process of shoveling three feet of detritus off the floor and wheelbarrowing it into the dumpster.
He's still working on that. And the dumpster is filling up fast.
Stay tuned for the next installment! Which will probably be A. fixing some of the big cracks in the stone walls. Or maybe gutting the kitchen of the nasty old cabinets, if there's room in the dumpster. 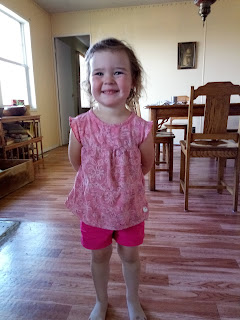 Happy birthday to
my girl.
Posted by Kristin @ Going Country at 4:43 AM 5 comments: