Long version: This was the last night my parents were with us for dinner, and I always make pizza when we have guests, so I made pizza. One cheese, one half pepperoni and half vegetable, and both a little bit charred on the bottom thanks to the fact that I still only have one shelf in my oven and had to rotate the pans with one on the single shelf and one directly on the floor of the oven.

I know. We've lived here for almost a year. I'll get to another shelf this year, I promise. Maybe.

The salad did not include lettuce from my garden--the fall planting of lettuce has not been impressive--but it did at least include tomatoes from my garden. I started with two dozen seedlings, which then became a dozen actual plants in the garden, which have now become three plants in the garden with tomatoes on them, two of which are a small cherry variety called Sweet Millions. From which I have harvested approximately twenty tiny tomatoes.

Long version: I had exactly one cup of leftover pork taco meat and one cup of chicken taco meat, both of which were combined with leftover rice and grated cheese to make dinner.

Long version: I was very excited for this not-quite-Caprese salad. First I bought some fancy fresh mozzarella balls at the store on Thursday when we were in a larger town to get the puppies' vaccinations done. I bought the mozzarella because I was afraid I wouldn't have enough asadero for the pizzas. But then I did, so I had fresh mozzarella on hand.

And then, when we stopped at the teeny tiny general store in the village after church*, there were half a dozen Roma tomatoes near the cash register, picked only a few minutes before by the owner from his garden. So of course I got those.

I didn't really have enough tomatoes for a true Caprese salad, which is why I added one of Rafael's cucumbers. I also added a thinly sliced shallot, because I like shallot. Despite the deviations from the traditional, it was still so good. 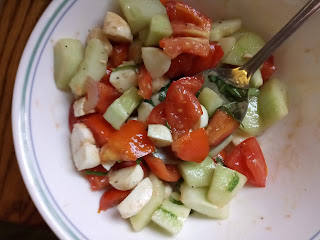 I didn't plate it like a traditional Caprese salad, either, so maybe I should just call it something else entirely.

I bought the peaches from a roadside stand in the same town where I got the mozzarella. I figured it was my last chance for peaches this summer.

Then Nick the Peach-Giver gave us two bags full of his white peaches that very afternoon.

Luckily, I know just what to do with a surfeit of peaches. With Nick's, I made peach jam, once again using the laborious recipe I used last summer. It has about half the sugar of a regular peach jam recipe, and Nick's extra-sweet, low-acid peaches do not need that much sugar. So I went through the silliness of a cheesecloth bag full of apple cores and straining juice and so on.

The peaches I bought were the ones I used for the peaches and cream. They weren't as good as Nick's, but certainly enjoyable with sugar and cream.

Long version: It's been awhile since I've made an actual roast. This one--with just a thyme and oregano spice rub and red wine--turned out really well.

The tomatoes came from the few surviving plants in the garden. If I'm lucky, I'll get maybe five dozen before the killing frosts. Better than nothing, I guess.

Long version: Lazy because I didn't even brown the roasts. Mostly because they were still frozen. I just put two of them in a big covered roasting pan with some tomato juice, salt, pepper, garlic powder, and bay leaf, and cooked them until they were done.

They weren't great, but they were fine. And they provided the leftovers I wanted for the next meal. Which was . . .

Long version: This was my first day of work, so I was anticipating being tired (I was) and wanting something easy. So I just chunked up the leftover roast and fried it in tallow with a lot of garlic. It was better than the original iteration of it.

I sure did miss this crazy girl all day. 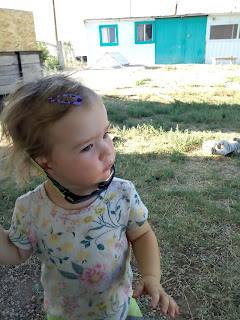 She didn't particularly miss me, however. Why should she, when she had her own personal servant and playmate in the person of Daddy all to herself?

Long version: While I was making quesdillas for Jack and Poppy's lunch, I charred about a dozen of the green chilis my dad brought me from Hatch. 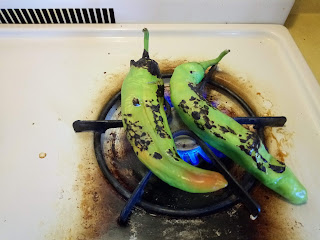 If it looks just slightly diseased, it's not charred enough. 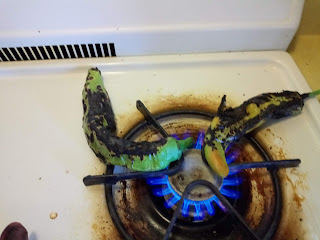 I did eventually get them charred and skinned, then I put a bunch in the freezer and used the rest in the ground beef for the tacos.

Only five dozen or so chilis left to char! I keep thinking we'll do it on the outdoor grill, but the wind has been so bad lately, I haven't wanted to have a fire out there.

* I didn't actually need anything this Sunday, but I bought a gallon of milk anyway, because the guy who owns it makes a point of being there by 9 a.m. on Sunday pretty much for us, so I feel an obligation to be there, too. And it's not like the milk will go bad or anything in this house.

In Which the Ladies Start Pulling Their Weight 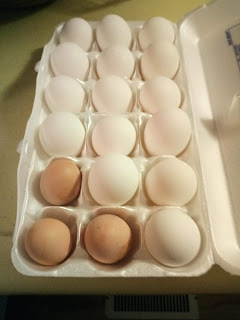 The home eggs next to the inferior store eggs are small, but mighty.

I feel slightly less resentful now about having to trudge out to the chicken coop in the dark every morning to bring them their container of scraps and cup of purchased food.

On the same day, Jack decided to let the chickens out of their yard, which allowed us the opportunity to teach the puppies not to chase the chickens, no matter how fun it might be. 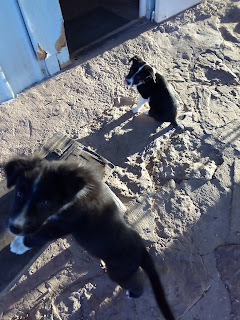 They were not convinced. They weren't sorry, either.

And in related news, the other lady in the house--by which I mean me--will be starting to earn her keep tomorrow. At least partially.

I'm going back to work.

I wasn't looking for a job, but I figured one would find me eventually. That's the way it goes in a small community. With a limited workforce, it's inevitable that every able adult will be expected to contribute in some way.

In this case, it was the school that asked for help. They had a huge increase in enrollment this year*, which is great, but the teachers are over-extended. The superintendent asked if I could help a couple of days a week as an "Educational Assistant." I think this is probably what we used to call a teacher's aide.

Anyway. I don't know exactly what I'm going to be doing, other than serving as another adult to supervise children, but I'll be working at the school on Mondays and Wednesdays when all three boys are at school. A. will be watching Poppy on those days.

A. just finished up his training to become the school bus driver, as well, so starting next week he'll be driving the school bus. Which means that on Mondays and Wednesdays, the entire family, including Poppy in her car seat, will be riding on the school bus. A. will bring Poppy home with him on the bus on the days I'm working, and then back to the school in the afternoon to drive us all home and drop us off before he continues on to drop off the rest of the kids.

Lots of adjustments to be made, and new routines to figure out. Wish us luck.

* Which means they went from 28 K-12 students to almost forty, plus thirty online students. So we're still not talking your average public school, but it's a lot for teachers that were accustomed to classes of three or four students.