It was a day almost like any other: letting dogs in and out, doing dishes, squelching through spring mud. Except it wasn't JUST like any other day, because at 4:32 p.m. on March 28, 2008, I wandered upstairs and, with very little thought or planning, started this blog. One year and 372 posts later, and I'm still not really thinking or planning, just sitting down and writing to you every single day.

"You" have grown larger with the passing of time. "You" now number over 100 people. It seems like a small number compared to some of the reader stats at other sites, but then I think what it would be like to gather all 100+ of you at Blackrock. Then I realize how many people that is.

I suppose I could have done a contest or given away a prize, something concrete to mark this anniversary of Going Country. But you come here for my words, even when I don't give you anything more. So today, after these 372 posts and thousands upon thousands of words, I have only two words of any importance for you:

Labels: all about me, confessions, friends, randomness

I'm Chained to My House Now

No, really. I'm NEVER LEAVING AGAIN. All the trips were fun and all, but in the end, I am a hermit and I need to stay in my little hermit crab shell (read: Blackrock) for a long, long time now to calm down. Too much stimulation on the Outside, ya know.

Here at home all I have are crowing roosters and whining puppies and yelling sheep and . . . what was I saying about too much stimulation?

Yesterday in The City involved meeting up with a friend of the MiL's whom you have been introduced to before (say hi to Mikey-not-the-Life-kid!). She was in The City because her husband is in a hospital there. So we met up to walk through the museum at the Fashion Institute of Technology. You should do this if you have the chance, because you get to see lots of pretty dresses and crazy shoes and it's FREEEEEEE. Yup, no cash to be doled out at entrance. In a city like New York, where cash seems to disappear spontaneously from your wallet, this is a relief. We also went to lunch, and then I went to the hospital to see Mikey-not-the-Life-kid's husband and cheer him up with my own particular brand of hospital humor, which involves observations on hospital gowns and invalids.

Then A. was released from hell and we drove home. Which took us a long time, because we left at around 5 p.m. Hello, traffic! Also, it was raining most of the way home and dark, and we are elderly people who do not like to drive in the dark, especially when the rain makes everything shiny and weird, so A. was driving like 50 mph most of the way home.

But! We did make it home, and now, as I may have mentioned, I am NEVER LEAVING AGAIN. There are seeds to be planted! Lambs to be born! A wedding to be hosted! Puppies to be sold off!

Labels: all about me, friends, randomness, the A team, travelin'

Can I just take a few of the restaurants in The City and relocate them to within 15 minutes of Blackrock? I'd leave all the people and the trucks and the buildings and the chaos and the noise*, but I'd really like to take some of the food home with me. That'd be swell.

* Can you tell I'm beginning to suffer from sensory overload?
Posted by Kristin @ Going Country at 8:30 AM 5 comments:

Labels: all about me, fun with food, randomness, travelin'

I know, I said no posting until I got home. But then I was walking down the stairs in our hotel (ALLLL the way down--we're on the 10th floor and the elevator is really slow, so I walk down), and I happened to see the business center. Free computer access! Score! So I thought I'd just pop in and let you know that so far, I have:

1) Gone to the Forbes Galleries. It's a museum in the lobby of the Forbes Magazine building. Their permanent collection includes a rather amazing display of toy boats and toy soldiers. Plus Monopoly games. I know, weird, right? But oddly fascinating, and, the best part? FREEEEEEE!!! That's right, no charge to see it all. I love free. Thank you, Forbes family.

2) Gone to the Strand bookstore. Remember Bookman's, in Tucson? The Strand kicks Bookman's ass. It's HUGE. Four floors, new books, old books, rare books. Too many books, actually. I get overwhelmed in places like that and don't know what to look for. Nevertheless, I spent about an hour wandering. I didn't buy anything, though. Maybe I'll get something when I take A. there tonight after his torture session is over with for the day.

3) Stumbled upon a cluster of Indian businesses on Lexington Avenue when I got a little lost. It was a good kind of lost though, as it resulted in me getting to have chicken tikka masala for lunch. For seven dollars. YUM. And cha-CHING.

It's still only 1:30 p.m., and I don't have to meet A. until 5 p.m. I don't know what I'll do now. More aimless wandering, probably. The beauty of The City. You don't have to be going anywhere, because just the getting to anywhere is an adventure in itself.

Until later, duckies!
Posted by Kristin @ Going Country at 11:12 AM 8 comments:

Labels: all about me, randomness, travelin'

Just a reminder: I'm leaving for The City tonight and will be gone until Thursday night. That means no Puppy Pictures for a couple of days. To make it up to you, I'm going to post TWO Puppy Pictures today. Plus an extra picture, just for fun.

So here we have the obligatory Cuddling with the Puppy Picture, in which I am looking less than stellar in my drippy, cold-suffering state. Pretty! 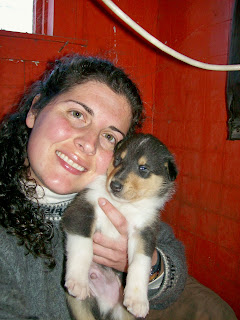 At least ONE of us is photogenic.

Then there's the obligatory Puppies Tussling Cutely About on the Floor Picture. They can toddle about now, and are barking, growling, and playing with each other. And of course, "playing" means biting each other's tiny little faces. 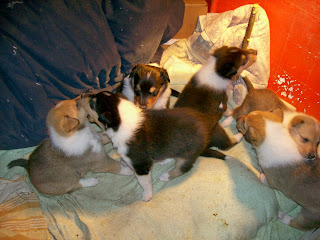 Even facial disfigurement is adorable when there are puppies involved.

But lest you get too carried away by the overwhelming cuteness that is the puppy brood, I am here to remind you that these innocent little balls of fluff will eventually turn into nasty dogs, whose chief pleasure in life will be carrying around a moldy, decomposing deer leg. Like their Auntie Mia. 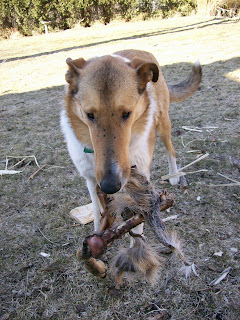 Auntie Mia prides herself on being a good role model.

There. I know I can never post enough Puppy Pictures, but that will have to tide you over for a couple of days. Peace out until Friday, poppets!

Labels: all about me, animals, dogs, travelin'

I may as well come right out with it: I'm leaving you again.

I KNOW. I just got home, and there are STILL puppies and seeds sprouting and seeds to be planted and 101 damned Things To Do. But I have to go. And, conveniently enough, we can all blame lawyers for this unfortunate circumstance.

See, A. is a lawyer. Lawyers in New York State are required to complete a certain number of hours of Continuing Legal Education every year. This means you either go to about 12 lunch meetings in the course of a year, which in A.'s case would mean missing half a day of work for every one because none of them are nearby, OR you wait until the end of the allowable time and go to one long two-day conference in The City*. He went with option B. And I'm going with him.

We did this last year, and it was pretty fun. For me, anyway, since I got to tool around The City while he sat on his ass in a ballroom full of about 500 lawyers listening to some dude lecture about ethics or something. (Does that sound like hell, or what?) This year, however, neither one of us is really worked up about going. Because we just got home, and there's so much to be done at home, and it costs so much to go to The City. AND, just to make it MORE FUN, both of us have souvenir colds we picked up on our last trip. This is going to be a party, I can just tell.

However, duty calls. So I will be leaving tomorrow night and will be gone until late Thursday night. Since I don't have a laptop, and the likelihood of me stopping in an Internet cafe or something while I'm there is pretty much nil, you'll just have to do without your daily dose of Going Country for a couple of days. I know, you'll be bereft and inconsolable. And also pretty pissed about this interruption in Puppy Pictures, if past comments are any indication. I promise to post a photo tomorrow before I leave, so you'll have something to stare at for those couple of days.

And then, once I get home, I'M NEVER LEAVING AGAIN. Amen.

* In this state, The City always means New York City.
Posted by Kristin @ Going Country at 5:40 AM 10 comments:

Labels: all about me, the A team, travelin' 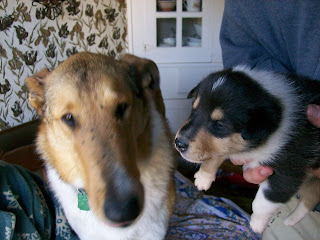 Mia isn't limping anymore, thank you for your concern. She IS, however, enjoying the puppies. She thinks they're swell, and she likes to give them tongue baths. 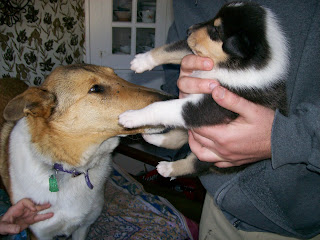