I'm done with this snow bullshit.  I don't care that it didn't stick; I do not want to see snow flying through the air three days before May.  It's spring.  We have newborn lambs* that do not appreciate the 26 degrees you gave us last night.  Knock it off.  Bring on the mild weather.

* Two more were born to a Merino mom on Thursday night, bringing the current lamb count to six--four girls, two boys, and nine ewes left to deliver.
Posted by Kristin @ Going Country at 5:42 AM 2 comments:

Back before I got caught up in all this gestating stuff, I was the one who did all the lawn mowing on our property.  It was not a small task, to say the least. We have a couple of acres of grass in various places. But then I got pregnant and A. quit his law firm job and ever since, he's been the resident mower.

The only lawn that can't be mowed with the riding mower is the dog pen.  And since it's so small, I decided that we didn't need a push mower with an engine.  I hate engines.  They always break and I don't know how to fix them and you have to mess around with oil and gas and . . . forget it.  So I got a reel mower, and I mow the dog pen.

But now I have a helper. 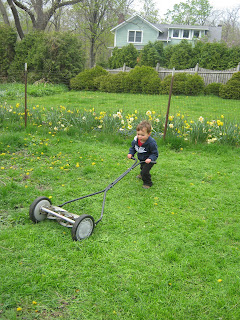 Finally, a mower Cubby can operate. 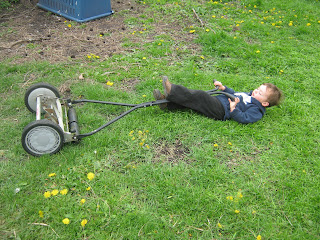 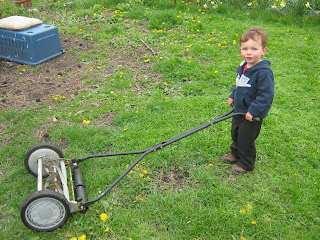 You can't keep the boy down for long, though. 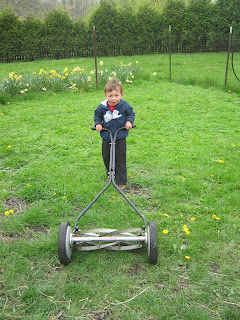 Especially when there's grass to be cut.

He spent a full twenty minutes pushing the mower around the dog pen today and didn't step in dog shit once.  Success.  On both counts.
Posted by Kristin @ Going Country at 6:05 PM 7 comments:

I Did Not Take Pictures. You Are Most Welcome.

I know you all get great joy out of my carefully taken and artistic photographs (yesyes, massive sarcasm indeed), but I think you'll be glad I didn't whip out the camera to take some shots of the lamb tails in a bucket.

Yup, just the tails.  Today was docking day for the four lambs born recently.  It's an unpleasant aspect of raising sheep, to be sure, but a necessary one.  The tails are shortened because it both makes the sheep easier to shear and reduces the amount of shit (literal shit, that is) that accumulates on the rear of the sheep. This means fewer flies and disease problems.  So, off come the tails.

A. uses a tool that looks kind of like pruning shears, but they plug in and get hot.  There's also a cauterizing bar on it.  So basically, he cuts the tail and then burns the flesh to stop the bleeding. I hold the lambs for this, which is just about as disgusting as it sounds, and pretty gruesome even for us, accustomed as we are to the gross and bloody.  Nothing makes you feel more like a heartless bastard than chopping the tail off a tiny bleating lamb.

One nice thing about sheep, however, is that they have very little brain and absolutely no memory.  Two minutes after their unpleasant procedure, the lambs were kicking their heels up and racing around the pasture in a pack.

So obviously no mental anguish there, then.

Also no mental anguish for Cubby, who watched us do this.  He looked a little concerned, and said, "Ouch," several times on behalf of the sheep.  Quickly followed by, "It's okay, lamb."  By the time it was all over and A. pointed out to him that the lambs were fully recovered already, Cubby had lost interest entirely in favor of pinching tulip leaves with the needle nose pliers.

And because I know there are some of you out there who are wondering what we do with the tails: We throw them in the trash.  No, the dogs do not get them.  That would be way too disturbing.
Posted by Kristin @ Going Country at 5:48 PM 6 comments:

Okay, maybe I should just admit that I'm lazy ALL the time, and if you give me an easy out, I will take it.  Nothing of any great note has been happening in the past couple of days because of the amazingly shitty weather (snow, rain, ice pellets, non-stop wind) that has kept us all cooped up inside.  Also, there is more sickness.  The MiL has sadly come down with the Cold from Hell and just as Cubby was getting better, he caught another goddamn cold and so began the cycle of snot and coughing anew.  My reaction to this was much silent profanity.

So not so much with the fun and entertaining lately.  Therefore, let's get to some questions, shall we?

1) How is the potty training going?  Why, I'm so glad you inquired! I just LOVE lavishing even more attention on my son's bodily functions!  Actually, it's good.  He doesn't have accidents much anymore, maybe once a week.  He isn't wearing a diaper at all for naps and in fact hasn't peed in his nighttime diaper in about two weeks.  On the downside, the kid STILL will not tell me when he needs to go, and if I ask if he needs to, he ALWAYS says no.  But since I spend much of my own time in the bathroom anyway, I just haul him in there with me and he goes regularly despite himself.

2) How is the pregnancy going? No problems, other than the run-of-the-mill ones for every pregnancy ever.  That is, I have officially entered the third trimester, which is unofficially known as the trimester in which everything gets awkward and uncomfortable.  Everything.  Sleeping, eating, lying on my back, sitting down, getting up, putting on shoes.  It's way fun.  And still three months to go!  Yee haw.

3) How is the nap/no nap going?  The no-nap phase was mercifully short (although even two days seems like WAY TOO LONG with a tired and pissed off toddler to deal with) and he's back to sleeping about an hour and a half to two hours a day for his naps.  Yesterday, when I had to go to the doctor and left A. with a napping Cubby, that kid slept over three hours.  Lucky A.  But that was only because Cubby is sick.  Anyway, he's taking good naps, which makes for much more happiness all around.

That's all for now.  Maybe something of note will happen tomorrow, but in case it doesn't, any more questions for me?  I'm digging this Q&A stuff.
Posted by Kristin @ Going Country at 6:02 PM 2 comments:

Labels: all about me, baby stuff, Cubby, family, MiL

I'm Not Packing Away the Winter Coats Yet. Or Maybe Ever.

Really now, Mama N.  What in the hell were you playing at today? 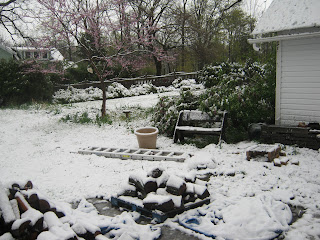 It was 80 degrees on March 22, and then today--which was, to refresh your memory in case it's as shoddy as mine is these days, April 23--we got two inches of snow.  Which stuck.  And actually continued intermittently all day.

That big low bush you see in the corner of the shed in that photo?  That's a lilac.  It was all set to burst into bloom any second.  And then it got crushed under the weight of the snow.  The sad and paltry collection of wood you see in the foreground is all that remains of the woodpile, which you best believe is being depleted at this very moment.

The temperature didn't actually get too terribly cold--I think it got to just at or right below freezing-- so I don't think there will be any lasting damage to any of the plants in the garden at the moment.  But I'm hereby putting that Mama N. on notice.  She can't be trusted.  Obviously.
Posted by Kristin @ Going Country at 6:06 PM 8 comments:

Q&A for a Lazy Sunday

There have been a couple of questions posed recently that I haven't actually answered.  And what better time to answer them than now, when I have nothing else of much interest to talk about?  Unless you want to hear about the enormous yew stumps A. battled with for most of this morning or the fact that Big Red is spewing smoke thanks to a suspected blown clutch.

Let's just go with the questions, shall we?

1) Why sheep?  Why indeed?  The very question I have asked A., and one I have yet to get a very good answer to.  The sheep are his, you see, but I'm not sure a whole lot of thought was put into the decision to get them.  He wanted animals.  Pigs are too smelly and hard to contain; cows are too big; goats are too wily.  So sheep it is.  They have the advantage of being small enough to be handled easily by A.--unlike, say, pigs or cows--and they don't require as much pasture as cows do.

2) How can you tell how long eggs have been in a nest and if they're still good?  This is in reference to the surprise nest I discovered a few days ago.  I knew those eggs hadn't been in there more than a few days because the nest had been created when we dumped the sheep-shit straw in the garden last weekend.  Also, the previous few days I had only found one egg, rather than the three or four I usually get, so I knew the hens had found a new nest.  As for if they're still good . . . unwashed eggs keep for weeks without refrigeration, but if there's any doubt, I drop them in a bowl of water.  If they float, they're bad news.  If they sink, you're good to go.  Something to do with an air pocket in the egg that expands as it ages.  I'm sure you can find more science-y explanations than that, but I just worry about the floating thing.