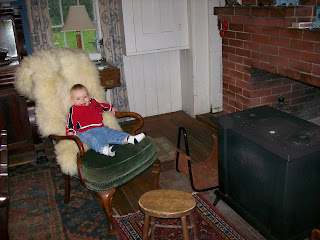 He may be older and bigger, but he still likes being parked by the woodstove.
Posted by Kristin @ Going Country at 9:10 AM 4 comments:

Yesterday afternoon, I canned the sauerkraut that's been, um, sauering in the Pit of Despair for several weeks now. Last night, I made and canned green tomato chutney* from the very last usable tomatoes. With the successful completion of these two tasks**, I am officially announcing the close of Canning Season 2010.

Since I neglected to keep a running tally as I went, I will have to go down in the Pit of Despair this weekend and count everything for the official total. Although it may not be entirely accurate, as I've already been using things like salsa and tomato juice. And I'll take the requisite photos of the full shelves. (Do you love the sight of shelves full of canned food as much as I do? Say yes.)

The question I am now faced with is what in the world I will do with my time now that I'm not constantly harvesting, prepping, canning, and cleaning up the huge messes I make. Solitaire? Video games? Knitting? (HAAAAA--no knitting for this craft-challenged person.)

Or maybe I'll just sit around eating all this food I've worked all season to produce. I think I'm up to that.

* Recipe courtesy of the MiL's friend Jane, who is a native of Yorkshire and therefore, by virtue of her Englishness, Knows Her Chutney.

** I haven't had any trouble with lids not sealing since those first few batches. So the Ball company is officially off notice. I'm sure that's a great relief to them.
Posted by Kristin @ Going Country at 6:00 AM 6 comments:

Labels: all about me, domesticity, fun with food, gardens

It seems somehow improbable that a person should be able to make yogurt. Shouldn't yogurt manufacturers have figured out how to hybridize their cultures by now, a la Monsanto, to create a product that can't be replicated by any fool with a pot and a thermometer?

Apparently not, because I am that fool. I made yogurt yesterday.

This is one of those things that I've been thinking for some time I should be doing. Unlike baking bread, which I know I WON'T do because I'm the only one who eats it and besides, I really, really hate kneading. It makes my hands and wrists ache.

Unlike the bread of which I am the sole consumer, we all eat yogurt. A LOT of yogurt. Including Cubby. And it's surprisingly difficult sometimes to find whole milk, plain yogurt. Low-fat plain yogurt seems much more common, for reasons I cannot fathom. So to get our whole milk, plain kind, we have to buy fancy name-brand stuff that costs about three bucks a quart. Know how much yogurt you can make with a three-dollar gallon of milk? Four quarts.

I think we can all see the cost advantages here.

Despite the overwhelming reasons making yogurt makes sense for me, I never did it because, in addition to kneading, I really, really hate messing around with thermometers in the kitchen. It's so boring, all this standing around watching the mercury rise and hovering until the correct temperature is reached, at which point I spring into action and rush to do whatever needs to be done before whatever it is cools off.

Plus, the prevalent method I was seeing for making yogurt without a purpose-made yogurt maker involved a slow cooker and took about 12 hours. Granted, the majority of that is not hands-on time, but I don't want to have to try to remember anything for twelve hours.

Which is why, when I happened upon this method that does indeed require the dreaded temperature gauging but only takes a few hours sitting around in a cooler after that, I decided to try it.

Fooling with the thermometer was as irritating as I expected it would be, but after that, I just stuck the jars of liquid hopefully-to-be-yogurt in the cooler with hot water. When I retrieved them three hours later, they had thickened up noticeably, and an hour in the refrigerator produced recognizable yogurt. Hooray! Take THAT, Dannon!

I didn't use particularly good milk--just the store milk we had around--and the yogurt I used for a starter was fairly mild, so the yogurt I made is correspondingly mild. In the future, I may try using some Greek yogurt as a starter to make tangier yogurt and then drain it to make it thick like Greek yogurt. But I'm happy with the results of my first yogurt-making attempt.

So it appears I'll be making our yogurt from now on. But bread? Forget about it. Pepperidge Farm works for me.
Posted by Kristin @ Going Country at 7:49 AM 12 comments:

Do Yourself a Favor

The next time you make pot roast (which, granted, is probably not as often as I make pot roast, as not everyone is working through half a cow), skip the usual wine/water/carrot/onion thing and instead braise the meat in onion, garlic, tomato, jalapeno, and cumin. Then, when the meat is done, take it out, de-fat the liquid, and add enough water to make the correct proportions for cooking cornmeal mush (or polenta, if you're fancy). Obviously, add stone-ground cornmeal at this point and cook it right in the juices from the meat until it's thick and creamy and incredibly rich from the meat juice.

HOLY GOD IS THIS GOOD.

And if you really want to do yourself a favor, make enough of the cornmeal to have leftovers that you can fry with your eggs in the morning. It's a much better breakfast than squash.
Posted by Kristin @ Going Country at 6:15 AM 6 comments:

I Had Squash for Breakfast this Morning

And thank God for the Internet! I mean, how else would I be able to share this life-changing and inspirational news with the world?

I know, eating squash for breakfast is weird. But I SO could not be bothered with cooking anything for breakfast this morning, and there was a cup or so of leftover mashed butternut squash in the refrigerator that only required a minute in the microwave before it was ready for consumption. So there you have it. Squash for breakfast, courtesy of my laziness and complete disregard for traditional breakfast foods.

So what'd you have for breakfast this morning? Put the power of the Internet to work and tell us all about it.
Posted by Kristin @ Going Country at 7:13 AM 10 comments:

It's walnut time again. Where's the back brace?

If you don't have any experience with black walnut trees, you should first of all consider yourself very, very lucky. Those wretched walnuts are the biggest imaginable pain in the ass. They rain down in the thousands every fall; they have to be picked up by hand because they're too heavy to rake up into piles; they stain everything black as they decompose; and they're toxic to many plants so you can't grow a lot of things under the trees. Plus, they're nearly impossible to crack for eating.

I hate pretty much everything about the walnut trees that wreck our lawns every fall, but it REALLY BUGS ME that they're actually edible but damn near completely inaccessible. The first year we moved back here, we hulled a bag of walnuts (meaning took off the round green part that protects the actual nut--this is different from the shell) and dried them in the barn. After they were dry, they were ready for cracking. But we could not for the life of us figure out a way to crack the ridiculously thick, hard shells that didn't result in the entire nut exploding and sending bits of shell and nut meats all over the damn place.

That's what happens when you smack a black walnut with a hammer, in case you were wondering.

So we have hundreds of pounds of edible nuts that get dumped on the beach or in the gully every year. Irritating. Almost as irritating as spending hours bending over to pick the little bastards up one by one. Which we did yesterday, all three adults and Cubby supervising from his chariot. Such a fun family labor day. We know how to have fun together, yes.

If I wanted to be really annoying, I could make some amusing, chipper comment about the bonding that occurs as a family works together. But the walnuts make me feel distinctly un-chipper, so there will be none of that. Instead I will don my gloves once again, load Cubby into his chariot, and resume the stoop labor of walnut picking.

Fill Me with Bread and Leave Me Happy

Know what's the best thing about a tea? I mean a tea as in a meal with a bunch of women sitting around drinking tea out of bone china cups* and eating finger foods? All of this finger food is bread-based. Sandwiches and cookies and cakes and . . . well, it's a damn good thing tea isn't a regular institution in the U.S. or I would weigh 300 pounds.

That's all. Carry on.

* Incidentally, I learned yesterday that bone china is called that because there is actually bone ground up in the porcelain to make the china. Somewhat gruesome, but a fascinating tidbit nonetheless.
Posted by Kristin @ Going Country at 6:46 AM 3 comments: